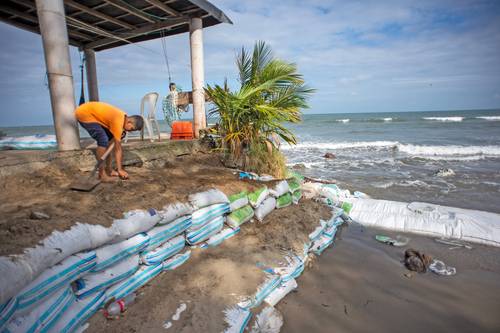 ▲ A resident of Las Barrancas places sandbags around his house to prevent water from further damaging his home’s structure.Photo Sergio Hernandez Vega

In Xalapa, Ver., Patricia Moreno-Casasola Barceló, a biologist at the National Autonomous University of Mexico, explains that the disappearance of beaches in Las Barrancas, Alvarado municipality, Veracruz is linked to three factors: The loss of sediment that was previously carried by rivers carried to sea; The melting of glaciers, which raise sea levels, as well as the expansion of the port of Veracruz and the construction of breakwaters north of Alvarado.

Moreno-Casasola, a PhD from Uppsala University, Sweden, and a researcher specializing in sustainable development, explains that sand on beaches comes from inland, travels through rivers and is redistributed by waves.

Because most of the world’s rivers are dammed, we no longer carry sand down, in some cases more than 100 years ago; So there isn’t enough sand to replace what’s lost naturally.Said.

On sea level rise, he explained that “due to the melting of glaciers—which is attributed to climate change—the sea is higher, and penetrates inland with greater force to pick up more sand.”

The researcher highlights that what is happening in Las Barrancas is similar to what is happening in different parts of the world, But in this community it occurs rapidly due to a third factor, as sediment is being retained by marine works that have been carried out to the north.,

Patricia Moreno, whose research focuses on freshwater wetlands and coastal dunes, pointed out that the expansion of the port of Veracruz and the construction of a breakwater at Antón Lizardo “detained (more) sediment on the left side than on the right”. .

Coastal currents come from north to south and carry sediment in that direction. When you put the first breakwater that will disrupt the coastal movement of sediment, you affect downstream neighborsHe elaborated.

He explained that the Veracruz-Boca del Río metropolitan area has a series of breakwaters along the coastline, “because the first affected the neighbors to the south; So they had to build another, and so … in the process, the construction of a dam in Las Barrancas is still missing”.

The academic commented: It is very important to fulfill the demand of the public. It’s not just your legacy, it’s your way of life., He highlighted the vulnerability of Las Barrancas, which is trapped between the sea and the mangrove swamp. Due to this the water level usually rises during the rainy season and the city turns into an island.