La Jornada: experts predict the collapse of the West Antarctic Ice Cap can be avoided 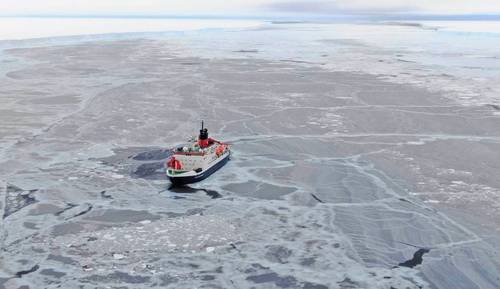 ▲ The rate of ice loss varies based on regional differences in atmospheric and oceanic circulation.Photo Alfred Wegener Institute / Ralf Timmermann

Paris. The collapse of the West Antarctic Ice Cap, which could lead to a catastrophic rise in sea level, is not IndispensableAccording to a study published yesterday in the journal Nature communication.

Since the early 1990s, scientists have observed an acceleration in the melting of ice in this region of Antarctica due to climate change.

The fear is that this phenomenon reaches a point of no return, beyond the evolution of climate.

The rate and extent of perturbation along the West Antarctic coast, particularly the unstable Thwaites Glacier (off the Amundsen Sea), varies by degrees, according to this new study based on satellite and ground data .

ice cap collapse is not inevitablesaid Professor Eric Steig of the University of Washington in Seattle.

It depends on how the climate will change in the coming decades, a change that we can positively influence by reducing greenhouse gas emissions.she added.

In these areas, the wind usually blows from the west, which brings warm and salty water, which in turn favors snowfall.

However, the intensity of these winds was weaker in the Amundsen Sea than conditions in the Bellingshausen Sea during the observation period.

Both the Antarctic and the Arctic polar regions have recorded an increase of 3 °C in their average temperature compared to the levels at the end of the 19th century, which represents almost three times the world average.

Scientists fear that Twaites and Pine Island glaciers already exist in it point of no return,

I think we have to live under the assumption and do our coastal planning that the West Antarctic Ice Cap is unstable and we’re going to experience about twelve feet of sea level rise.said Anders Lavermann, a climatologist at the Potsdam Institute in Germany.

The expert welcomed the study anyway, carried out from several sources, although the period analyzed is barely wink in glacial conditions,