La Jornada: in two years, five circles were executed close to the former head of security 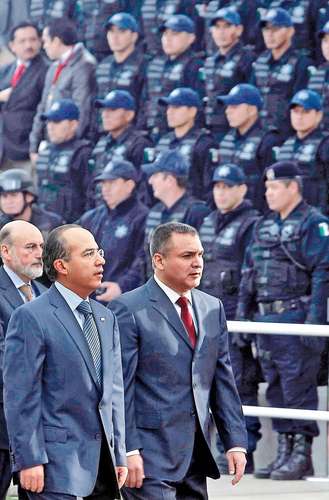 In two years, five circles close to the former head of security were executed

Between 2008 and 2009, when Genaro García Luna was at the height of his power – he was secretary of public security and head of the federal police during the government of Pan Felipe Calderón Hinojosa (2006–2012) – five of his main aides were reportedly They were executed for betraying agreements made with the leaders of the Sinaloa Cartel and the Beltrán Leyva brothers’ organization to protect the operations of those criminal groups and to act against rivals.

The police chief will face trial before a New York court and trial begins tomorrow in which he has been charged with five counts, four for conspiracy, He is accused of accepting bribes and collaborating with organizations led by Joaquín El Chapo Guzmán Loera and Arturo Beltrán Leyva to smuggle cocaine into the United States.

García Luna has been accused of involvement in acts of corruption since 1999 while in the Federal Preventive Police (PFP), when he participated in the illegal acquisition of aircraft and patrol cars for the corporation with his mentor Wilfrido Robledo But he was disqualified for five years only because of allegations leveled by the then Secretary of the Comptroller and Administrative Development (SEKODM).

During his management as head of the Federal Investigation Agency (AFI), incidents were recorded that indicated the involvement of his close associates with the Sinaloa Cartel. Federal agents were probably used to eliminate rival groups of the organization directed by El Chapo Guzmán Loera.

In September 2004, the then Attorney General’s Office (PGR) opened a preliminary investigation PGR/SIEDO/UEIDCS/013/04, according to which three funeral wreaths appeared in front of AFI facilities with the legend. CuidenseAimed at members of the Special Operations Division.

It is believed that Domingo Gonzalez (now a fugitive from justice) and other top-level AFI commanders had agreed to conduct a search in Tamaulipas with members of the Sinaloa Cartel to arrest Osil Cárdenas Guillén, the then leader of the Gulf Cartel.

According to statements made to US authorities by Jesús Reinaldo Rey Zambada, the brother of Ismael El Mayo Zambada García, one of the leaders of the Sinaloa Cartel, the delivery of bribes to García Luna and his associates began between 2005 and 2006.

Ray Zambada will be one of the key witnesses in the trial against Garcia Luna. Edgar Valdez Villarreal, La Barbie, another US justice aide who was part of the Sinaloa Cartel but decided to work with the Beltrán Leyva brothers when that organization split, will also testify.

▲ Between 2008 and 2009, García Luna reached the height of his power during Calderón’s tenure.photo conference

Murders of close associates of García Luna were recorded between 2008 and 2009.

In the Irigación neighborhood of the current Miguel Hidalgo mayor’s office, Roberto Velasco Bravo, who served as head of the Strategic Analysis Division of the Anti-Drug Division of the Federal Police, was shot in the head. He reportedly protested the theft of his truck.

Three days later, in the Romero de Terreros neighborhood, Coyoacán, Aristio Gómez Martínez, who had served as director of the Federal Police General Staff Headquarters, was killed. The matter was not disclosed.

In the early hours of May 8, 2008, Edgar Millán Gómez, General Coordinator of Regional Security of the Federal Police, was assassinated upon entering a house in the Guerrero neighborhood, which houses the current Cuyhtemoc mayor’s office. The execution, according to the investigation, was carried out on the orders of the Beltrán Leyva brothers.

On 25 June 2008, one of those closest to Genaro García Luna was assassinated: Igor Labastida Calderón, in charge of the Federal Police’s Investigations and Operations Sector against Illegal Business Trafficking. He was considered one of the operettas of Edgar Milne. The attack took place at an economic kitchen located on Mexico-Tacuba Road in Miguel Hidalgo, a short distance from the corporation’s facilities and where García Luna and his associates occasionally visited.

In December 2009, Edgar Enrique Bayardo del Villar, who was a close associate of García Luna and served as Director of Operations of the Federal Police, became a protected witness after it was discovered that he was collaborating with El Mayo Zambada. went. They killed him while he was having coffee at a business in the Del Valle neighborhood.

The first statement that led the United States government to request García Luna’s arrest was made during the trial against El Chapo Guzmán in New York on November 20, 2018.

Ray Zambada testified during the Chapo trial that, between 2005 and 2007, he personally delivered portfolios of $3 and $5 million to García Luna on two occasions. The first time, on December 10, 2019, the former officer arrested in Dallas was the head of AFI; Second, served as head of the Federal Secretariat of Public Security.

Zambada also said at the trial that he knew the Beltrán Leyva organization was preparing the delivery of $50 million to the most powerful man, former President Felipe Calderón.