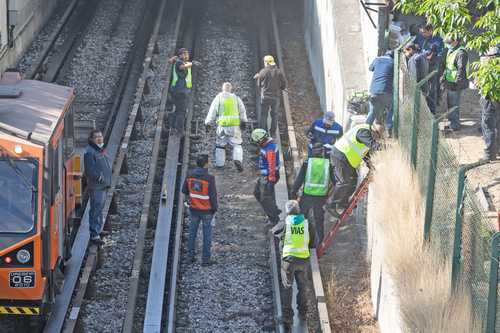 ▲ The Collective Transportation System reported that the uncoupling of the wagons of the collided trains had been completed, so only two remained on the track, which were being reviewed, as well as the electrical and electronic installations.photo pablo ramos

Alberto García Lugo, deputy director of operations for the Metro Collective Transport System (STC), was removed from his post after the collision of two trains at the Potrero-La Raza interstation on Line 3, informed Guillermo Calderón, head of the organization. Aguilera. Meanwhile, the capital’s Attorney General’s Office (FGJ) indicated that the investigation is continuing with the integration of the folders and analysis of the convoy’s black boxes, which record their operations minute by minute.

As a background to what happened, the official announced that since Friday night there were reports of failures in the signaling system in the section where the accident occurred, which is why the low speed march protocol was activated.

He said it would be the FGJ’s expert opinion that would determine the cause of the accident, although officials and staff indicated that one line of inquiry is that the accident occurred.

Even among STC personnel who requested anonymity, it emerged that it could have been sabotage, taking advantage of the fact that signaling failures were reported on the said section, which Speed ​​reduced to 35 kmph,

Another line of inquiry, local government officials explained, is that despite there being a new tetra-type radio communication system, there are activists who oppose using it, as all communications are recorded.

Meanwhile, Calderón Aguilera confirmed that the new Central Control Post (PCC), which was put into operation at the end of last October, which controls traffic and the interaction of trains from lines 1 to 6, is working full time limitAnd it is also one of the elements that has been assigned to the prosecution for analysis.

He explained that the reason for the dismissal of the STC’s deputy director of operations is to facilitate the investigation, and that Francisco Echavarri Hernández, a master of engineering from the National Autonomous University of Mexico, with a 35-year career in the Metro, is a member of the National Autonomous University of Mexico. has been appointed in his place.

This was said in front of Claudia Sheinbaum Pardo, head of the government of Mexico City. The accident was caused by a collision between the trains involvedand informed that they have already submitted their initial statement before the FGJ as part of the action taken by the Unit to clarify the facts.

Prosecution works on black box analysis and concludes with compilation of evidence to formulate relevant opinion; Besides this, various statements were taken which will be included in the investigation folder.

For its part, the Mexico City Human Rights Commission (CDH) reported that it has opened an investigation into the facts of the accident.