La Jornada: The Bardo, A False Chronicle of Certain Truths 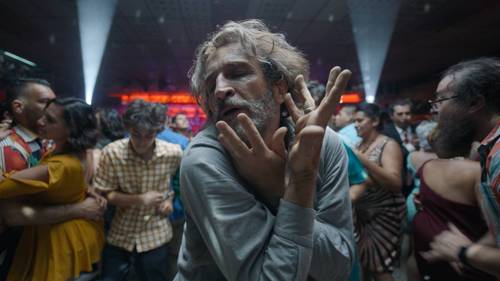 A still from the film by Alejandro González Iñárritu.

as glitter Ego on the eve of receiving an award for his professional work in the United States, the country where he lives with his family, Mexican journalist and documentarian Silverio Gama (Daniel Giménez Cacho), suffers an existential crisis that Manifested through paranormal dream experiences. It is actually a long illusion of the character, who is now unconscious in a Los Angeles hospital after suffering a stroke on public transportation. The Bardo, A False Chronicle of Certain Truths (Alejandro González Iñárritu, 2022), records an indefinite and exhausting account of the fear, confusion and mental self-flagellation experienced by this character, the apparent alter ego of the filmmaker, during his visit to Mexico City. In this apocalyptic city, many ominous signs announce to him the fate of his fate. In the streets of the historic center, he sees people mysteriously fall onto the asphalt, while he sees a spider climbing the surface of a showcase; Later, he would discover a sinister pyramid of corpses in the Zocalo of the capital. It is possible to assume that these Jodorowsky baroque scenes are intended to symbolize the tragic fate of the thousands of people who disappeared in Mexico, or that another sequence in which Silverio may discuss with an American ambassador the sale of Baja California to the commercial giant Amazon is a to the possible political situation. But everything is diluted in a great nebula of whimsical events and accumulation of commonplaces that tries to present a condensed image of the country that so many foreigners inevitably mistake for real from a hasty reading by Octavio Paz or his many other exegetes. Judges who discuss the endless true essence of the Mexican.

The tiresome succession of fanciful images with which director Iñárritu Silverio seeks to depict the delirium of Gama’s unconsciousness has dazzling moments (photography by veteran Darius Khondji); Unfortunately, the whimsical excess of the script and the arbitrariness of its individual symbols turn the experience into something heavy and painful. To justify this overload of painstakingly simple notes, the director has explained that everything in this film must be understood as the product of the delirium of Silverio Gama, who finds himself lying in a hospital bed, One who oscillates between life and life. death already so close Bardo, the transition to the next rebirth of existence and an intense moment of existential reflection, according to Buddhist thought. Based on this cryptic premise, everything is permitted in the field of events: from the return, of his own free will, from the womb right out of the womb to his place of origin, possibly to the disgust of the social reality he will have to face, to Silverio’s own dead until reuniting with the father in a sequence in a urinal where the son, literally tiny, impotently interacts with the unattainable patriarchal figure. But what is most poignant in the protagonist’s experiential account is his ordeal as a celebrated as well as misunderstood filmmaker, not only in his own land, but also in neighboring countries, and more intensely as a foreigner. Lives in the sad reality of being. A country in which they have lived in a golden self-exile, without material constraints, a situation markedly different from that experienced by thousands of their undocumented countrymen. For artist Silverio’s sensibility, that difference hurts.

In a key sequence, after allowing himself to be pampered and celebrated as a football idol, the filmmaker has a corrosive dialogue on the rooftop of a California dancing club with an old colleague who is now disillusioned. Gone, he harshly criticizes her attitude and her work. Of all the movie references suggested by the film, one is prominent, the half past eight (1963) by Federico Fellini, where the director, played by Marcello Mastroianni, sullenly mocking his dead father, bears the critic’s criticisms with stoic dignity, mercilessly pointing out his creative sterility, an early suggests retirement, all in the form of a kind of self-portrait of Fellini himself, poetic and sincere. The ego that Iñárritu displays in this attempted creation of his documentary alter ego is of a very different kind. It’s a falsely humble self-criticism, according to British magazine sight and soundit shows us A sneak peek into a filmmaker’s navel on a silver platter, The prodigal son’s hopeless return to the land of that first attribute, loves dogs (2000), which has been reevaluated today, seems more spontaneous, honest and risky.

It is shown on the Netflix platform and in commercial rooms.