La Jornada: the President and the Head of Government inaugurate 2 great works in Chapultepec 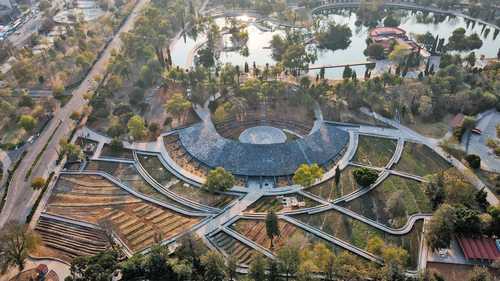 ▲ The Government of Mexico City completed the construction of the Eco-Cultural Center and the Floating Causeway of the Chapultepec Forest as part of the Chapultepec Project: Nature and Culture, which was inaugurated yesterday by President Andrés Manuel Obrador and the capital’s President, Claudia Sheinbaum. Pardo.Photo Presidency of the Republic

Alejandro Cruz Flores and the Writing

President Andrés Manuel López Obrador and the head of government of Mexico City, Claudia Sheinbaum Pardo, inaugurated the Floating Causeway and the Ecoculture Center of the Chapultepec Forest.

The President of the Capital pointed out that these works are part of the Chapultepec Project: Nature and Culture carried out by both administrations and can be visited by the general public from this Saturday.

After the opening ribbon-cutting, heads of federal and local executive power toured the road that leads from the Los Pinos Cultural Center to another section of the forest, as well as the Environmental Center, which houses a museum, among other attractions.

After the tour, in which the press was not invited, the President expressed on his Twitter account that it is almost two great and glorious works for the enjoyment of all people,

In the aforementioned social networks, the Tabasco politician spread the images of the tour he made through the Bosque de Chapultepec.

Separately, after visiting the Parque Abasolo community center of the Puntos de Innovación, Libertad, Arte, Educación y Saberes (Pilares) program, Sheinbaum Pardo stressed that Chapultepec: Nature and Culture is among President López Obrador’s priority projects. One, which consists of 12 cultural nodes and actions for environmental restoration of the forest.

Regarding the Floating Causeway, he explained that it is a pedestrian connection between the first and second sections of Chapultepec, which can also be traveled by bicycle and is accessible to people with disabilities.

This pedestrian bridge is expected to benefit 7.6 million people passing through the area. It runs from Molino del Rey to Avenida de los Compositors and has a length of 436 meters on the peripheral ring, for which 26 steel columns with optimized geometry were built and oculi for the passage of trees. It was designed by Gabriel Orozco Félix at a cost of over 300 million pesos.

Environment Culture Center added, This is one of the most beautiful works of the second volumeWhich includes the transformation of a parking lot into a park and overlooks one of the lakes, so it also has two piers, as well as a place where archaeological fragments found during construction are displayed, dating from the Preclassic period. We do.

272 million pesos were allocated for this property and an exhibition center, vertical wetlands, five types of ethnobotanical gardens and eco-technical samples.