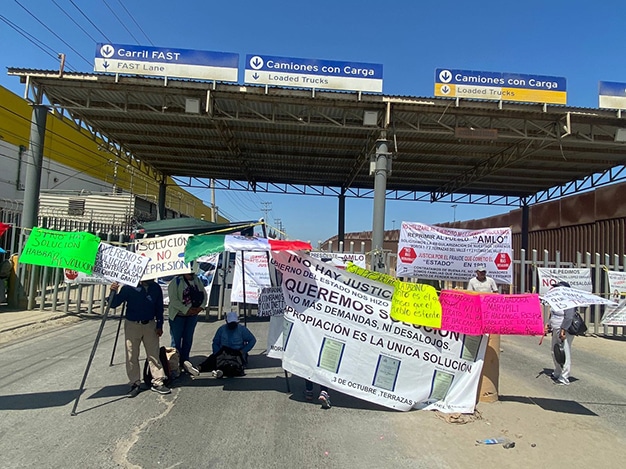 Tijuana, BC The Ote port of entry, through which about four thousand trucks loaded with Mexican products for export into the United States and vice versa cross every day, has been closed since 9 a.m. local time, from La Morita. Due to the blockade by the settlers – among the poorest in the city – demanding regularization of their properties.

A group of just over 60 people set up a camp in the access lane to the United States to demand a meeting with the President of the Republic, Andrés Manuel López Obrador, and the Governor, Marina del Pilar vila, as many of them met with Maclovio Rojas Ejido. for 30 years and have not been able to regularize their land tenure.

Protesters blocked access with some vehicles and chairs, which they had placed in the middle of the road, preventing trucks from crossing and forming a long line at the checkpoint, which usually begins its operations at seven in the morning. Is.

Residents of La Morita insist that over the years they have tried to regularize their land – where they have built houses – but have not received a real response from the authorities.

He denounced that he bought his land from the then PAN government in the 1990s, but did not get title to his property, and said that during every political campaign there are candidates who offer to end this legal insecurity, But no one has followed it. ,

Residents confirm that more than 50,000 families live in the neighborhoods of La Morita 1 and 2, Maclovio Rojas and 3 de Octubre, and they live in uncertainty as they suffer harassment from Ejido’s alleged owners, who want to evict them. and fear that their inheritance may be taken from them.

On 15 March, President Andrés Manuel López Obrador referred to the issue in the context that “we should investigate how the legal situation is and we help through the Ministry of Urban Development, which has to do with the regularization of land tenure.” We’re going to ask Roman Meyer to review the issue, “and to go to Tijuana with the agricultural lawyer there”; however, that hasn’t happened yet, he reiterated.

Severe heat in Central America, appeals to people to stay in homes