La Portena: The silent train accident, the horror of the neighbors and the thrill of reaching Floresta in half an hour La Portena, the legendary locomotive, one of the stars of the country’s first railway. His soul mate was Argentina

In a final rehearsal before the opening of our country’s first railway, the formation arrived at Floresta, the terminal station, without incident. The locomotive hauled a passenger car and a freight car. The directors of the initially owned company, who were going as passengers, were excited and encouraged the driver to travel faster in the city of Buenos Aires.

To handle the operation of the first two locomotives, he hired john You Thomas AllenTwo brothers who were born in Liverpool and who had to train other machinists to handle the new steam locomotives were opposed by many because coal was expensive and they proposed that the traction may well be blood.

John Allen, 22, put the locomotive into high gear and as it went over an embankment, the inevitable happened: The train derailed, broke about seventy meters of tracks and ended its crazy run when it got stuck in the ditch,

The company’s vice president, Daniel Goland, bangs his head against secretary Adolfo Van Preet. Blood spilled immediately on Gowland’s forehead, while Treasurer Francisco Moreno fell on President Felipe Lavalol, and Mariano Miro was about to swallow the cigarette he was smoking.

They agreed to keep the incident a secret.Since August 29 the inaugural visit would take place and there was already a long time of trials and postponements in the process. They didn’t want to scare investors Nor give more reasons to those who opposed the train, whose houses were trembling in its wake. 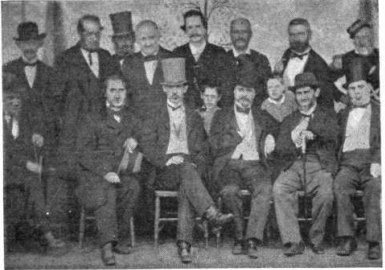 Governor Pastor Obligado with the Directors of the Railway Company. The fact that Buenos Aires has been seceded from the Confederation gave it a wide margin of action, along with customs revenue, which made it possible to cope with various development projects.

The idea of ​​railways arose in the meetings that the landlords Manuel Jose GuerricoIn his mansion at Corrientes 537. He was one of the first art collectors in the country, whose collection led to the opening of the National Museum of Fine Arts. In those meetings, various politicians, businessmen and members of the local oligarchy prepared the development of the first railway in Argentina.

He founded on September 17, 1853 Iron Road Society from Buenos Aires to the West And in January of the following year, Governor Pastor Obligado enacted a concession law.

He bought two locomotives, La Portena and La Argentina.fixed with the numbers 1 and 2, which came from England in 1856 25 kmph speed And they were built in the workshops of the Railway Foundry Leeds, a company founded in 1838. Some say that La Portena originated brand new from English workshops and others assure that it was used in the Crimean War fought between 1853 and 1853. 1856 Empire between the Kingdom of Russia and Greece against the Ottoman Empire, France, Great Britain and the Kingdom of Sardinia.

Now, this place has the Teatro Colon. It looked like Parke Station in 1880 (Photography General Archive of the Nation)

They had to agree on where to build the stations and demarcate the route. In meetings that were kept secret, because real estate interests were numerous, they agreed that The head station was built in a block delimited by the streets of Cerrito, Libertad, Tucumán and Waymonte., Today that property is occupied by the Teatro Colón. The location for the artillery unit at that time was known as Plaza del Parque, where the Palace of Courts is today.

Access to the station was via Libertad Street., while the workshops were located on Cerrito. The platform was fifty meters long and four meters wide.

engineers participated in the tasks William Bragg -who surveyed the first railways in Brazil and the gas lighting system of the city of Rio de Janeiro-, Carlos Vergerwho prepared the first plan and the French Paul MouillardThose who had to solve the challenge of leveling the road and study how to avoid rivers and flooded land. This work was done by about 160 workers. 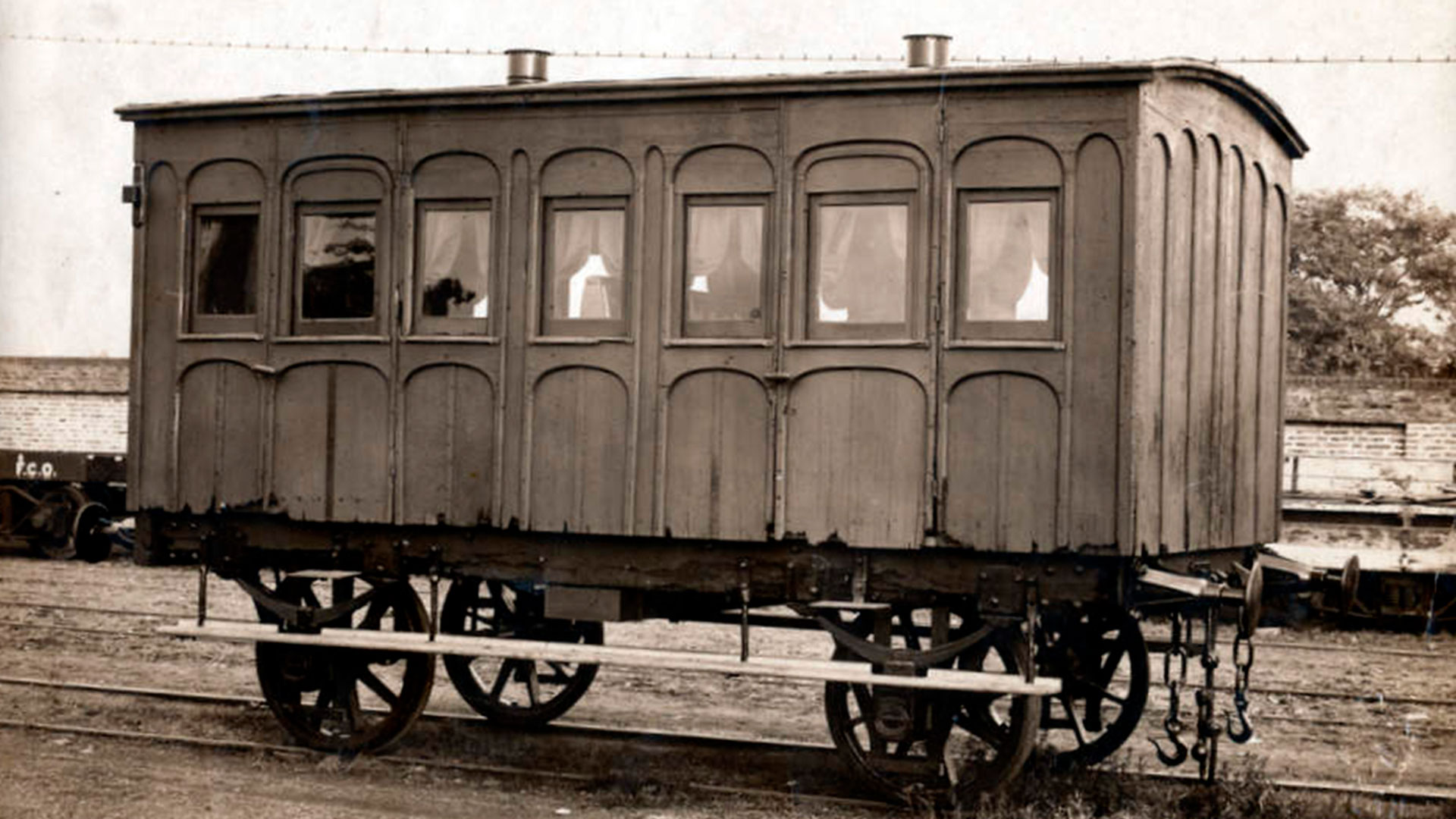 Each car could carry thirty passengers. were first and second

Iron rails were used and when they were finished they were made of wood covered with sheet metal. The formation was composed of four cars, each with a capacity of thirty passengers. It was mounted through a side door located in the center of the car, which was illuminated by a gas lamp. The train ran on a gauge of 5 feet 6 inches.

In the first idea, the train would take present-day Viamonte to Junin and from there the track would make a long curve until it ends at Corrientes and Pueredon at de Septimbre station, which was then called Centro América.

The final route started at Park station and crossed the square diagonally., The bars were brought from England and placed on the side of the road to protect passers-by.

It then continued through Lavelle, which is wider than the rest of its layout until the laying of the Callao track. When it reached this road, through Hornos de Bayo, the route had to make a curve and a counter-curve before ending at Corrientes.

As the train left Park station, it made a curve and crossed the square diagonally.

Through this artery it ran in a straight line into the vicinity of Central America, making a new curve to what is now Perón. At the height of the Ecuadorian road there was once de Cetembre station, which served at that location until the last days of 1882., It continued to Almagro, where there was a stop near Medrano Street. The station ceased to function on June 15, 1887.

Then before Cucha Cucha came the Caballito station, located on Federico García Lorca Street. The building was poor, with narrow platforms, with wooden walls and a cardboard roof.,

In the city of Flores, the first station was at the intersection with La Paz Street, today Caracas. After some time he ran on the streets of Artigas and Kondarco.

the terminal was in the woodsOn JV González Street and Bahia Blanca, where the church of La Candelaria stands today.

On that Saturday, August 29, 1857, refreshments were served to 200 passengers invited for the first voyage. Officials, executives, shareholders, guests and journalists participated. presence of bartholomew mater, Domingo F. sarmiento, Valentin Alsina And this cacique yanquetruzDressed in his military uniform as a lieutenant colonel, who was in the city to close the peace agreements.

After offering vote of thanks and blessing the locomotives, the formation left after 2 pm. While passing the Vans de Septimbre station, she did so under a few arches of flowers while the military band performed various pieces. As he passed, inquisitors thronged and churches rang their bells.

The next day, on the 30th, the service was made accessible to the public. The train used to run during the day and on moonlit nights. Later, when the light was put into the machine, night travel was enabled.

was the first machinist alfonso corasiAn Italian trained by Allen. In 35 minutes he covered the route of more than two leagues, taking six hours when he did it by car and two hours traveling by galley., Tickets cost 10 pesos in first class and 5 in second class. 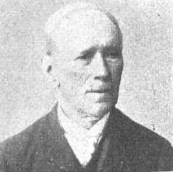 The locomotive was withdrawn from service in 1890. But first he had to do a sad service. In the summer of 1871, the epidemic of yellow fever And the increasing number of the dead caused them to be moved enough to be taken to the early cemetery established at Chakarita.

He assigned Ferrocarril del Oeste to lay a track that would run six kilometers from the city center along Corrientes Street to the cemetery. Thus the “funeral tram” or “funeral train” was born., which departed from Corrientes and Ecuador and had two stops, one at Medrano and the other at Ministro Inglis, today Scalabrini Ortiz. In each of them, he carried loads of corpses.

The French engineer was responsible for laying the tracks. augusto ringulate who completed the work in record time on Tuesday, April 11, two days after Easter, which resulted in 72 deaths. 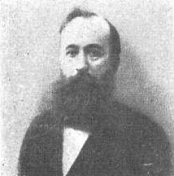 The Frenchman Augusto Ringuelet was in charge of laying the tracks to the Chacarita cemetery, in front of the clock, when yellow fever was rising in the city.

The locomotive used was La Portena, which pulled wagons with carcasses covered with a black canvas. A passenger car closed the formation, where the relatives of the deceased had gone to bid them a final farewell. He made two daily trips to Chakarita, one way only.

The driver was John Allen. Also on the third day as the conductor of the funeral train, at the age of 36, he became another victim of the epidemic, doing one last service with the steam engine, with which it was possible to reach in an incredible 35 minutes. Floresta.