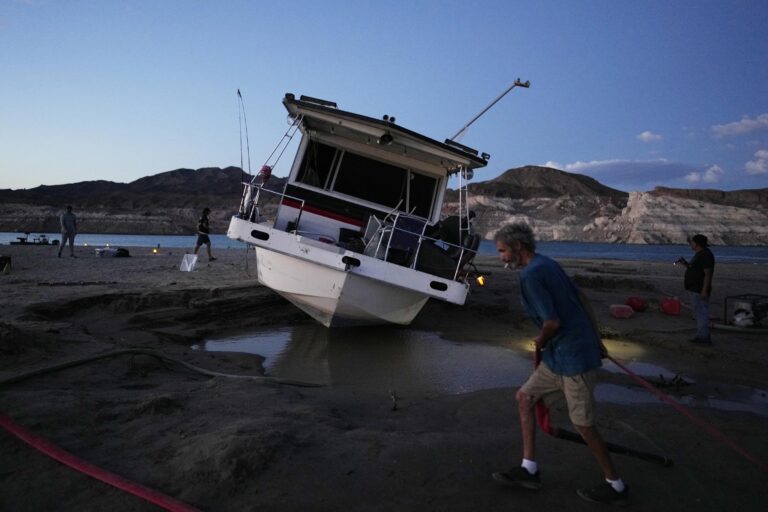 Largest US reservoir dries up due to climate change

BOULDER CITY, Nevada ( Associated Press) – An old abandoned boat emerges from the parched mud like a huge tombstone. The epitaph might be: “Here lie the waters of Lake Mead.”

The largest reservoir in the United States has less water than ever since it was filled 80 years ago due to a severe drought, exacerbated by climate change and the water consumption of 40 million people in seven states, which is drying up the Colorado River.

The wildfire season is getting longer and the flames are more intense. Temperatures break records and lakes dry up.

The water level in the Lake Mead National Recreation Area has dropped so low that the remains of two people lie alongside dozens of fish in what has become a boat graveyard.

Boats, sailboats and speedboats pose at the bottom of the lake, creating a surreal image in the middle of the desert. A buoy that once marked an area outside the bounds of boats is perched on land. Not a drop of water is seen around him. Even a WWII ship that had sunk was discovered.

Nature did not create this paradise for fishing, camping and kayaking. The mighty Colorado River, which divides Nevada and Arizona, flowed under the walls of the Black Canyon until the Hoover Dam was built in 1935 to irrigate the area, control floods and generate hydroelectric power.

The reservoir is now less than 30% full. Its level has dropped 52 meters (170 ft) since reaching its maximum height in 1983, leaving a white band of mineral deposits on the brown canyon walls, reaching the height of a 15-story building and impacting occupants of passing boats.

Most of the boat ramps are fenced in and the launch docks have been lengthened to reach deeper into the lake. A water mark from 2002 is above a path that leads to some distant docks.

The low water level has consequences not only for the cities that depend on the reservoir, but also for the boats that navigate in shallow waters, avoiding islets and sandbanks.

Craig Miller was driving his houseboat last month when the engine died. The boat floated to the shore and stayed there. The water was up to his knees. A few days later there was no water in that sector.

“It’s amazing how quickly the water disappeared,” Miller said. “It was surrounded by land.”

He bought pumps and tried to dredge the sand to see if he could create a water channel to get the boat out, but to no avail. The cost of towing it, initially estimated at $4,000, rose to $20,000 when the boat ran aground.

Miller spent three weeks on his houseboat, diving into the watery parts of the lake to combat the stifling temperatures.

Until one day Dave Sparks, a social media personality known as Heavy D, who had seen a video about Miller’s drama, showed up with a crew to save the boat and bring it to a dock.

Gone is the parched lake, where people take selfies and whose bottom looks like broken glass in a thousand pieces, full of cracks and mud.

Associated Press’s full environmental coverage in English is at https://apnews.com/hub/climate-and-environment