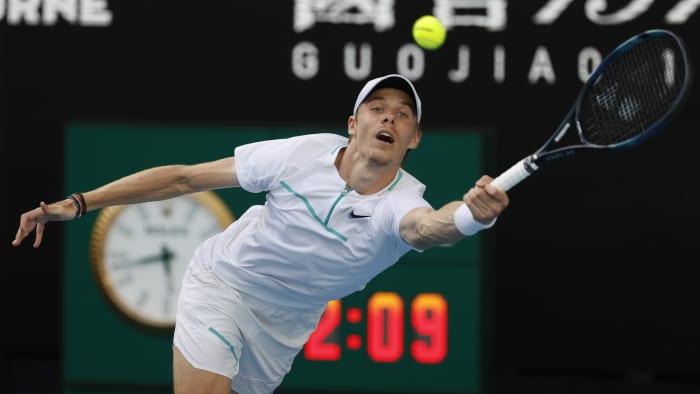 Melbourne – Latest (all time local) at the Australian Open on Sunday:

The 14-seeded Shapovalov has reached the quarter-finals in Australia for the first time.

The 22-year-old Canadian registered a 6-3, 7-6(5), 6-3 victory over Olympic gold medalist Zverev at Margaret Court Arena, less than an hour after Nadal made his Australian Open quarter-finals victory. secured the position. 14th time.

Shapovalov spent nearly 11 hours on the court during the first three rounds, winning twice in four sets and once in five, and was surprised by the relative pace of his 2-hour, 21-minute victory over Zverev.

“Probably the one I expected to finish in at least three,” he said. “Definitely happy with where the game is. I played smart today.”

Rafael Nadal has reached the quarterfinals of the Australian Open for the 14th time after beating Adrian Mannarino in straight sets after a long opening tiebreaker.

This extended his streak to 21 straight wins against fellow left-handers.

Nadal moved to equal second place with John Newcomb on the all-time list for most quarterfinals in Australia. Roger Federer tops that list with 15. It is also his 45th time in the last eight in a Grand Slam tournament, third on the all-time list behind Federer (58) and Novak Djokovic (51).

French Open champion Barbora Krejcikova advanced to the quarter-finals of the Australian Open with a 6-2, 6-2 win over two-time champion Viktoria Azarenka in her fourth round match at Rod Laver Arena.

Fourth-seeded Krejcikova needed only 85 minutes to beat the 2012 and 2013 champions and reach her third quarterfinal in four Grand Slam events.

Krejcikova broke Azarenka’s serve in the third game and then in the seventh game and took control of the first set.

He broke again in the opening game of the second set and then rarely had trouble closing in after the temperature approached 34 °C (93 °F).

Keys defeated Badosa 6-3, 6-1 in the opening match of the seventh day at Rod Laver Arena.

The 26-year-old American, who defeated 2020 Australian Open champion Sofia Kenin in the first round, never looked in trouble against high-ranked Badosa in the first meeting of her career, racking up 26 winners as she continued her unbeaten start to the year .

Keys, who won her sixth career title in Adelaide last week, took a 3-0 lead in the first set and finished the first set in 32 minutes.

The second set was even more one-sided for the unseeded American, breaking Badosa in the first, third, fifth and seventh games to win 1:09 and earn his first quarterfinal berth in Australia since 2018.

The 24-year-old Badosa, who was also unbeaten this year after winning the Sydney International earlier this month, made 10 double faults and lost his service game five times.

Play has begun on the seventh day of the Australian Open and the temperature is expected to reach 93 degrees Fahrenheit (34 Celsius) as the fourth round begins.

Former US Open finalist Madison Keys will face eighth seed Paola Badosa of Spain in the first round of the fourth round at Rod Laver Arena on Sunday.

Later, top-ranked Ashleigh Barty will continue her bid to break a long Australian Open drought when she takes on 60-ranked Amanda Anisimova. Barty aims to be the first Australian woman to win the championship here since 1978.

The 20-year-old Anisimova saved two match points in the third round in a surprise reversal from defending champion Naomi Osaka.

In the men’s draw, Rafael Nadal will continue his quest for a men’s record 21st Grand Slam singles title when he takes on French left-hander Adrian Mannarino, while No. 3 Alexander Zverev faces a difficult match against Canada’s Denis Shapovalov. Will be from.

Other matches include No. 7 Matteo Berrettini against Pablo Carreo Busta and No. 17 Gael Monfils meeting Serbia’s Miomir Kekmanovic.

The secret to better coffee? Birds and bees: Study calculates effects of winged helpers on coffee – while finding a better way to...