To date, we have found more than a hundred precious Martian rocks that arrived from the Red Planet and at some point landed on Earth. Among them, sample ALH84001 may well be one of the most enigmatic.

This meteorite fragment was picked up during a snowmobile ride through the Alan Hills Icefield in Antarctica in 1984. It is believed to have formed on Mars about 4 billion years ago. Immediately, it was “recognized as the most unusual stone collected” on the journey.

What has particularly intrigued scientists since its discovery is the tiny traces of organic carbon found in the rock. Could this point to early alien life on Mars all those billions of years ago?

Well, probably not, judging by the latest research on the fragment. Instead, the organic molecules found in the meteorite are most likely the result of certain fluid-rock interactions similar to those that occur on Earth. 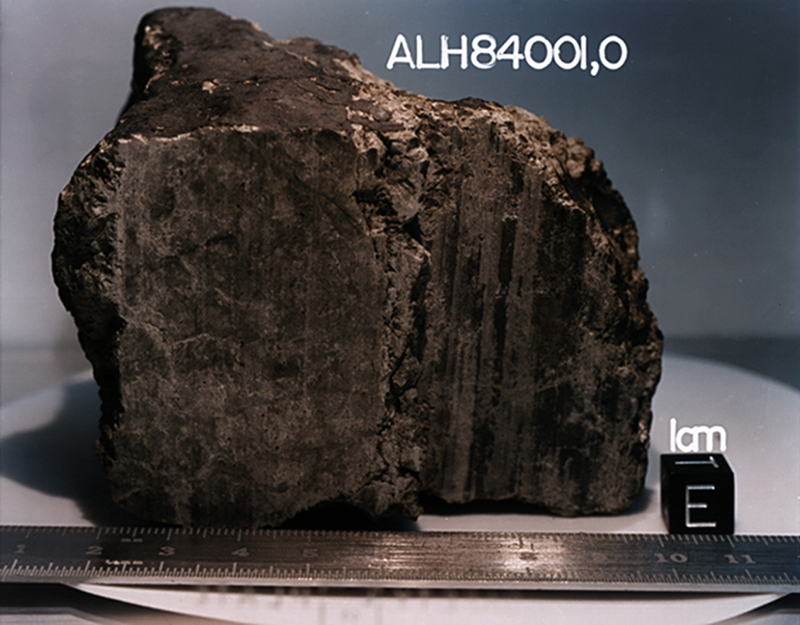 “Analysis of the origin of the minerals contained in the meteorite can serve as a window to both the geochemical processes that took place at the beginning of the Earth’s history and the potential for life on Mars,” says astrobiologist Andrew Steele of the Carnegie Institution of Science in Washington, DC.

“As one of the oldest known rocks from Mars, ALH84001 serves as a window into early planetary processes that may have also occurred on early Earth,” the team notes in their paper.

“Hypotheses about the origin and mechanisms of formation of these organic substances include abiotic production from impact, magmatic and/or hydrothermal processes; biological production by alleged ancient Martian organisms and terrestrial pollution”.

To study the tiny carbon globules found in ALH84001, the team accessed a thin section and fragment of a meteorite obtained from NASA’s Johnson Space Center.

They subjected these fragments to various methods, including nanoscale imaging, analysis of the isotopes present in the rock, and spectroscopy (using light to study the chemical composition of matter).

Their results showed that the characteristics of the rock indicate that it could easily have been formed in the presence of non-biological or abiotic processes known to produce organic carbon molecules here on Earth. The first is serpentinization, which occurs when igneous rocks (solidified from lava or magma) rich in iron or magnesium interact with circulating water to form hydrogen.

The second process is carbonization, in which rocks react with slightly acidic water dissolved in it with carbon dioxide, resulting in the formation of carbonate materials. It is not clear if both processes occurred simultaneously, but the study suggests that they did not occur for an extended period of time.

“All that is required for this type of organic synthesis is for a solution containing dissolved carbon dioxide to seep through the igneous rocks,” says Steele.

“These kinds of non-biological geological reactions are responsible for the pool of organic carbon compounds from which life could have evolved, and represent a background signal to consider when looking for evidence of past life on Mars.”

Several other abiotic processes have been proposed for the presence of organic material in a meteorite, in addition to the hypotheses that it is traces of alien life or contamination from Earth: volcanic activity, a collision with Mars, and hydrological forcing have been put forward as hypotheses. in the past.

Serpentinization and carbonization are rarely found in Martian meteorites, especially in ancient ones, although these processes have been detected in orbital surveys of the red planet. It seems that abiotic synthesis of organic molecules has been going on on Mars for almost as long as the planet has existed.

“On Earth, these reactions are responsible for abiotic organic synthesis, methane production and mineralogical diversity. On Mars, such reactions are relevant to habitability and are used to explain the presence of methane in the atmosphere,” the team concludes in their paper. .

As with most exploration of Mars, there are implications for Earth, which had a similar start. One way these new discoveries will be useful in the future is by informing researchers about the ancient history of our own planet and how organic molecules first appeared.

“The search for life on Mars is not just an attempt to answer the question: Are we alone?” This also applies to the environment of the early Earth and answers the question “where did we come from?”

The study was published in The science.

Grass, Zote Soap, and Other Things You Shouldn’t Use in Your Bath, Say Experts

La Jornada: Sehuaya, a place where you can enjoy the jungle