Launched candidacy for foreign deputy in front of hundreds of followers 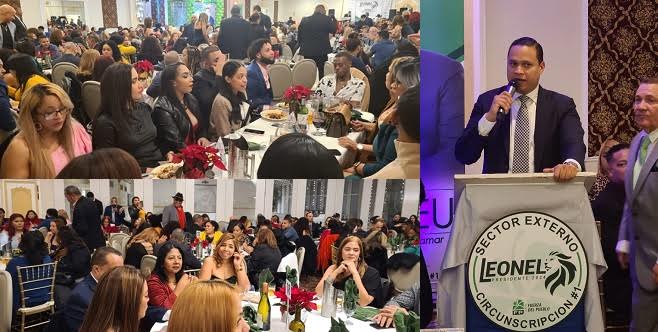 New Jersey.- Henry Abreu, a member of the Central Directorate (DC) of the People’s Force (FP) in this state, launched before more than half a thousand followers including politicians, professionals, businessmen, community members, businessmen, religious, athletes and ordinary. Citizens, among others, his candidacy for deputy for constituency one in the United States.

The general coordinator of FP’s outdoor field in the said constituency, which covers the states of New York, New Jersey, Pennsylvania, Connecticut, Washington DC, Maryland, North Carolina, New England and Canada, was confused upon reaching the event. Personal greetings with hundreds of his followers and former President Lionel Fernandez.

Abreu, the automobile businessman, addressed the public saying: “Politics is my passion, my desire is to serve, to deliver, to give and to be part of what is not being done at the moment.”

“These deputies (from abroad) have not even shown their faces since 2012 and this cannot continue, because this city respects itself and continues to respect itself. “What they are doing is an abuse,” he said.

“What a representation we have, this cannot continue when we represent 10 provinces of the Dominican Republic and we can promise life, “I will not let you down” because I will open two stores, one New York in the U.S. and another in NJ, where there would be a telephone, a secretary, and they would have our direct telephone number to communicate with us”.

“We will air the grievances presented by the Dominican diaspora in the long, medium and short term. Thank you for believing in us and I think this is the President’s event, what is being experienced here is tremendous.”

He concluded by saying, “With the outfield, Lionel Fernandez and Henry Abreu we will win in 2024. We will come out with our proposals soon.”

In addition, Ramiro Espino, the PF contact with the outside sector in the US, spoke out, who said: “This is a monstrous activity … I did not see any ex-candidate fill a place here, that means that person Has a lot of charisma, and this is reflected in the growth of the party, and the candidacy of Lionel Fernandez for the presidency in 2024 is being assimilated in America.

The former senator from Samaná concluded, “Hopefully the other former candidates will do the same to move the party forward in the future.”

The crowded event took place on Saturday night in the “Florentine” large hall at “The Excelsior” convention center located at 190 US-46 in the city of Saddle Brook in Bergen County.