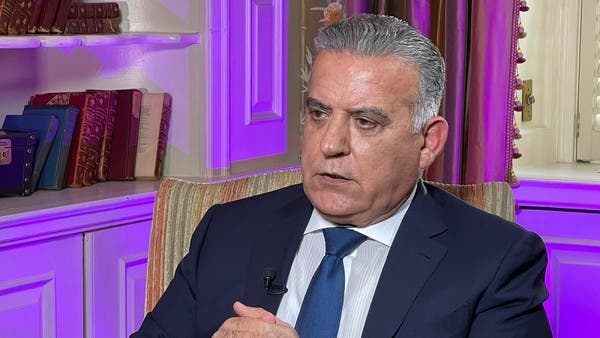 Lebanon’s powerful intelligence chief said on Tuesday he was working to mediate between the US and Syria over the release of at least six American hostages, including Austin Tice.

Lebanon’s head of general security, Major General Abbas Ibrahim, also warned that the situation in his country could worsen after the results of recent parliamentary elections.

Speaking to Al Arabiya during a visit to Washington this week, Ibrahim said negotiations on a deal to free the hostages were almost complete under the Trump administration. “But the circumstances [put the deal on hold], I believe we need to resume where we ended the talks last time,” Ibrahim said.

Ibrahim was invited by the Biden administration to Washington, where he met with several senior US officials.

On Sunday, the Lebanese official met with Brett McGurk, the White House coordinator for the Middle East and North Africa, and others from the National Security Council. During his visit he also met with CIA chief Bill Burns.

Ibrahim has made similar visits on a regular basis as his role in the release of Western hostages has proved successful in recent years.

“The purpose of the visit was to discuss the situation in Lebanon and the region, in addition to the missing Americans in Syria,” Ibrahim said, revealing that there were six American hostages in Syria.

In 2020, Ibrahim helped free American citizen Sam Goodwin and Canadian citizen Christian Lee Baxter from Syrian regime custody in separate missions. He is also working with the US to trace the fate of missing journalist Austin Tice, who was kidnapped by the Syrian regime in 2012. Ibrahim went back and forth between Beirut and Tehran in 2019 to help facilitate the release of Nizar Zakka. A Lebanese citizen who was also a permanent resident of the United States at the time. Zakka was kidnapped by Iran’s Islamic Revolutionary Guards Corps (IRGC) in 2015 after receiving an official invitation from the kingdom for a conference in Tehran.

Asked if there was a renewed effort for him to help with the mediation effort, Ibrahim said: “If there is no movement on this front, we need to build it. This is a purely human matter and needs to be discussed away from any political differences.”

There are currently no diplomatic relations between the US and Syria. According to the State Department website, the Czech Republic serves as a power protecting US interests in Syria.

One of the most high-profile cases of missing Americans has been that of journalist Austin Tice.

Tice’s mother spoke in a positive tone at an event in Washington on Tuesday. “I’m always hopeful that today is the day my son will call and say I’m on the way home,” Debra Tice told Al Arabiya English.

He also praised Ibrahim for being respected and “successful in bringing people home”.

Ibrahim did not elaborate on Tice’s case or any of the other five hostages, but he also met with Roger Carstens, the special presidential envoy for hostage affairs at the State Department.

Sources have told Al Arabiya English that Carsten was in Lebanon at the end of March to discuss the file of American hostages.

Ibrahim was excited about the prospect of success on the hostages. “both sides [Syria and the US] Do not resist the efforts of mediation to resolve this,” he said.

Last week, Lebanese voters went to vote for new members of parliament. The results saw the election of more than a dozen candidates from civil society and several other fresh faces in the 128-member house.

While Hezbollah and its Shia allies, the Amal Movement, maintained their hold on Shia lawmakers, their parliamentary bloc was stripped of its majority.

Political tensions rose, as usually happens around the world during elections, but there has been an unprecedented financial and economic collapse in Lebanon.

And despite the election without major security incidents, Lebanon’s intelligence chief sounded the alarm. Ibrahim said wait and see how the new political factions would be formed. “But what we saw, and the speeches of politicians, even after the election, unfortunately do not indicate a positive attitude,” he said, adding that there is “always light after dark”.

Lebanon has struggled to deal with the crisis since nationwide anti-government protests and the coronavirus pandemic in 2019. The Beirut explosion added to the country’s troubles.

Ibrahim said the only way out of the situation is for the Lebanese government to implement the reforms requested by the International Monetary Fund (IMF) and the World Bank.

These reforms included, among other measures, an increase in taxes, which would affect ordinary citizens more than the political elite.

“There is worse, and worse. If we do not improve, we will end up in a worse situation, so we need to accept the bad in the future, not to get worse,” Ibrahim said on whether the population of Lebanon was like this. can afford the austerity measures.

Read Also:  Kaprizov, to host the flames of the wild

Iran-Israeli tension will not end

Ibrahim was in the US this week when a senior member of the Islamic Revolutionary Guards Corps (IRGC) Colonel Hassan Sayyed Khodai was shot dead inside Iran.

Tehran has promised retaliation and has accused Israel of being behind the killing.

Hezbollah, Iran’s most powerful proxies abroad, is seen by some as potentially reacting or acting with a response.

But Ibrahim said it was far-fetched and he did not believe it would affect security inside Lebanon. “The place of conflict is outside Lebanon. Iran and Israel are campaigning against each other outside Lebanon, and I do not think they will spread outside the areas where they are currently taking place.

Asked whether Tehran or Beirut had decided not to include Lebanon, he said it was “only a Lebanese decision.”

Lebanese courts are still investigating the shocking explosion at the port of Beirut on August 4, 2020.

The Federal Bureau of Investigation has not released a full version of its findings and Ibrahim referred questions to Washington as to why.

But he later said that the Lebanese authorities have the report and it is up to them to release it. “I am positive that it will be released at the right time,” he said.

Political strife and interference have prevented many judges from completing their investigations, including refusal to testify by several lawmakers and prime ministers.

“Everything gets politicized in Lebanon. so don’t be surprised [the investigations] has taken a political turn,” he said.

In addition to his work as a mediator and intelligence chief, Ibrahim has been sent as an envoy to represent Lebanese officials in various capitals.

Among the political missions he has served are the Lebanon-Israeli maritime boundary dispute, which several US administrations have tried to help.

During his last visit to Beirut, he reportedly submitted written questions to the Lebanese government.

Hochstein’s last visit was in February, with stops in Lebanon and Israel. Lebanon has yet to respond, and the US diplomat warned it wanted to help, but would not have an open-ended timeline to help resolve the dispute that has been going on for years.

According to Ibrahim, the Lebanese elections and their preparations delayed Hochstein’s response.

Nevertheless, Beirut is set to submit a formal letter to Washington soon. “I confirm that Lebanon will respond soon through a written response, just as it has received questions from the US. We are working on this file, and the response is almost complete,” Ibrahim told Al told Arabia.

Literary journal Conjunctions to shut down this fall