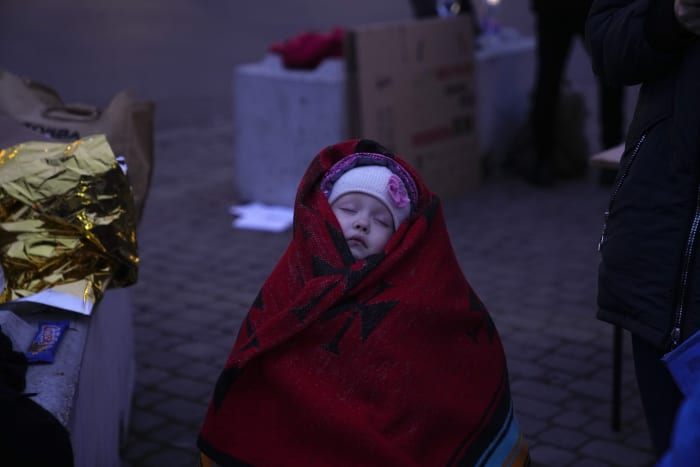 The latest developments on the Russia-Ukraine war:

GENEVA — The International Organization for Migration says the number of people who have left Ukraine since fighting began has now reached 1.45 million.

The IOM said that nationals of 138 countries have crossed Ukraine’s borders into neighboring nations.

“This war must be stopped immediately and there must be a return to the negotiating table,” Ibrahim Kalin told broadcaster NTV in Istanbul. He said Saturday that “our president will talk to Putin tomorrow.”

NATO member Turkey has close ties to both Russia and Ukraine and has repeatedly offered to mediate between the two. It has invited the top diplomats of both countries to Turkey for talks next week.

Turkish Foreign Minister Mevlut Cavusoglu said Friday that Russian Foreign Minister Seygey Lavrov had confirmed his attendance at the Antalya Diplomacy Forum, to be held in the Mediterranean coastal city between March 11-13.

The Economy Ministry said Saturday that the memorandum of understanding to build the LNG terminal in Brunsbuettel, on Germany’s North Sea coast, was signed Friday. It didn’t give financial details or a timeframe.

The terminal will be run by Gasunie, which is owned by the Dutch state, and Germany’s KfW development bank will have a 50% stake. The ministry said that, in the long term, the plan is to re-equip the terminal to import green hydrogen derivatives.

Chancellor Olaf Scholz said last weekend that Germany will quickly build two LNG terminals, one in Brunsbuettel and the other in Wilhelmshaven. Germany wants to reduce its dependency on Russian gas following the attack on Ukraine.

Foreign Minister Luigio Di Maio told Italian state TV Friday evening that “this is the only way to convince” Putin “to reason.”

Financial police in the port of Imperia immediately seized the 65-meter (215-foot) “Lady M,” with an estimated value of 65 million euros, owned by Alexei Mordashov, as well as the “Lena,” valued at 50 million euros and belonging to Gennady Timchenko. Other seizures were reportedly under way.

The safeguards will be drawn up on the basis of International Atomic Energy Agency criteria, a statement from the French presidency said Saturday.

A Russian attack on a nuclear plant sparked a fire on Friday and briefly raised worldwide fears of a catastrophe. The statement said Macron is “extremely concerned about the risks to nuclear safety, security and the implementation of international safeguards resulting from the Russian invasion of Ukraine.”

KYIV, Ukraine — The Russian military will observe a ceasefire in two areas of Ukraine starting Saturday to allow civilians to evacuate, Russian state media reported, but there was no immediate confirmation from Ukraine. It would be the first breakthrough in allowing civilians to escape.

The Russian Defense Ministry statement carried by the RIA Novosti and Tass agencies said it has agreed on evacuation routes with Ukrainian forces to allow civilians to leave the strategic port of Mariupol in the southeast and the eastern town of Volnovakha “from 10 am Moscow time.” It was not immediately clear from the vaguely worded statement how long the routes would remain open.

The head of Ukraine’s security council, Oleksiy Danilov, had called on Russia to create human corridors to allow children, women and the elderly to escape the fighting, calling such corridors “question No. 1.”

The crowd shouted, “Stop war. Protect lives.” Some held signs that read: “We stand with Ukraine.” Others held images of Russian President Vladimir Putin with the words: “Stop Putin.”

Russia’s shelling of a nuclear plant in Ukraine on Friday and Putin’s implied threat of nuclear war have struck a nerve in Japan, which suffered atomic attacks at the end of World War II in Hiroshima and Nagasaki, as well as the worst nuclear catastrophe since Chernobyl in Fukushima in 2011.

“It’s too terrible,” said housewife Yukiko Asano, one of the protesters.

The protest, one of the largest in Tokyo in recent years, included people from Europe and spiraled through the fashionable Omotesando district, extending for blocks. Many wore yellow and blue, the colors of Ukraine’s flag. Organizers said about 4,000 people took part.

“We need to stop Putin. We need to end the dictatorship,” said a Russian software engineer, who asked to be identified only by his first name. “This kind of situation is a way to nowhere.”

“We will not do so unless at gunpoint. Sorry to be a free speech absolutist,” Musk said in a post on Twitter.

Mykhailo Fedorov thanked SpaceX founder Elon Musk for the equipment in a Twitter post accompanied by a photo of boxes on the back of a truck. Federov had publicly requested the service.

Musk replied with his own tweet saying: “You are most welcome.”

The tech billionaire has said Starlink was “active” in Ukraine and more equipment to use it was on the way.

Starlink is a satellite-based internet system that SpaceX has been building for years to bring internet access to underserved areas of the world. It markets itself as “ideally suited” for areas where internet service is unreliable or unavailable.

SINGAPORE — Singapore has announced sanctions against Russia over its invasion of Ukraine, becoming one of the few governments in Southeast Asia to do so.

“The sovereignty, political independence and territorial integrity of all countries, big and small, must be respected,” said an announcement by the Foreign Ministry.

The tiny city-state imposed controls on exports or transshipments of military-related or dual use items considered “strategic goods.” It said the sanctions were aimed at constraining Russia’s ability to wage war and engage in “cyber aggression.”

The regional commercial hub also said it would prohibit all financial institutions from doing business with four Russian banks: VTB Bank, Bank Rossiya, the Promsvyazbank Public Joint Stock Co., and the Corporation Bank for Development and Foreign Economic Affairs Vnesheconombank. Companies with existing dealings with the four must freeze their assets, it said.

The order also bans providing financial services or enabling financing for the Russian central bank, Russian government and entities owned or controlled by them.