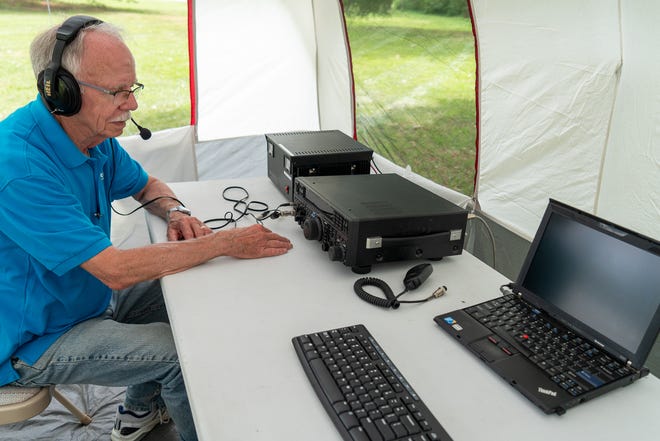 A group of amateur radio enthusiasts and operators set up camp in a Temperance Park to test their skills with thousands of others in North America as part of an annual gathering.

According to ARRL, the event began in 1933 and is the premier annual event for ham radio enthusiasts. More than 35,000 people attend the event each year, with campers’ stations throughout the United States and Canada.

The event takes place every fourth weekend of June and officially runs 24 hours a day from 2 p.m. on Saturdays. Attendees wear shirts or badges displaying their personal call signs, a practice common among hams. These call signs are used as legal identifiers for those who use amateur radio communications.

Terry Colton (call sign N8NYP), who handles communications for MCRCA, said the hams are uniquely equipped and prepared to keep communication lines open in the event of disasters and power grid failures. However, he added that many people have no idea what hams do.

“Usually, when I mention amateur radio, I get a blank stare,” he said.

Still, he noted that amateur radio operators are everywhere, and they often participate in charitable and community activities.

“Amateur radio is a hobby, but there are many of us who spend time in public service,” he said.

In addition to camaraderie, the event serves as a friendly competition to see who can make the most contact with other operators, and methods range from vintage-style Morse code to high-tech radio equipment. .

Dale Williams (WA8EFK) is the Great Lakes Division Director for the ARRL. He explained that get-togethers have many purposes, including exercises for emergency situations, as well as light-hearted activities such as competition between geographically based classes across North America. Each section receives 1 point for every contact made to another section – or 2 points for contacts made via Morse code.

Williams said there is always an operator and a designated log keeper throughout the event. It helps in tracking the points and documenting all the contacts made.

“Our computers are networked, so we see how others are doing,” he said.

Paul Troughton (W8PI), who participated in his first program in 1958, noted that the busiest time is usually at the beginning, and it begins to slow down a bit after midnight.

“Once we’re set up and operating, we’ll talk on the radio,” he said.

Wes Busdikar (KC8SKP), who said he has been participating for at least 15 years, explained that the activities go on throughout the night.

“There are some breaks, but some go on for a very long time,” he said.

“At 2 in the morning, it gets very tough,” Williams said.

Still, the group isn’t entirely without a few features.

“We have a coffee pot running 24 hours a day,” Troughton said.

Despite the hours-long run, the group aims to create an off-grid setting with no standard electrical service, using generators for electricity – just as the electrical grid and other daily communication methods were down.

Keith Hutchinson (KJ8H), on the other hand, said that in addition to more serious preparatory activities, it’s fun to talk to others, no matter how far away.

“I love the thrill of being able to talk to people from all over the world,” he said. “Most of them speak English.”

Hutchinson claims that ham radio is an excellent hobby because of its international use and its ease of access.

“You can educate yourself or you can come to a club like ours to get an education to get your start,” he said. “There’s a lot of information out there.”

To be given an operating license and call sign, one has to pass a government-issued test. The MCRCA offers these tests with a 1-day class on the second Saturday of even-numbered months.

Jeff Giles (K8OLV) was attending the event for the first time. He told that his professional life took him all over the world. Now that he’s retired, he sees an opportunity to continue talking to people and learn more about ham radio by participating with longtime attendees.

Additionally, Giles noted that there are far more high-impact ones associated with ham radio communications.

“With all these difficult times, open communication is the way to peace and prosperity on the planet. I want to be a part of it.”