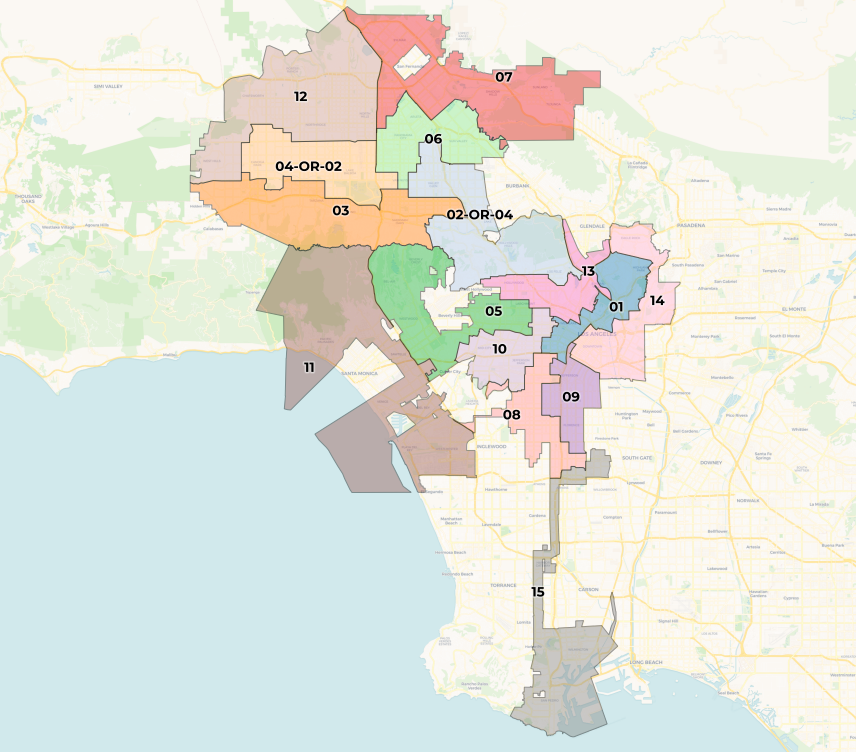 The Los Angeles City Council on Tuesday took the first step to rework the controversial map of the city’s political boundaries, with council members drafting 38 proposals to rework the plan presented by the Citizens Commission.

Some of the proposals are secondary, such as the proposal to include Little Ethiopia in one municipality. Others are much broader, making it more likely that major parts of the Boundary Review Commission’s draft map could be discarded and replaced.

Council chairman Nuri Martinez, a critic of the commission’s work, has called on city officials to prepare an alternative redistribution map that builds heavily on a proposal presented last month by a Latin American working group. She suggested that the labor card would serve as a model for several areas in the San Fernando Valley, including her own.

The workforce map calls on Martinez to reclaim key parts of his area, including the Sepúlveda Basin Recreation Area and the Lake Balboa neighborhood. It will also keep much of the East Valley area intact, represented by Councilor Paul Crecorian, who is faced with the opportunity to represent a neighborhood that is 100% new to him.

Martinez’s proposal does not explain what will happen to the areas immediately south of the valley, on the Eastside, or in the city center. A spokeswoman said city analysts will consider options for these areas.

The surge in mapping proposals is setting the stage for serious debate among councilors about who will represent specific neighborhoods, business districts, and economic assets. The stakes are going up even further, this debate is played out ahead of the city’s election campaign, when eight council seats are contested.

The County Reallocation Commission presented its map to the council last week, recommending major changes to the constituencies represented by Raman, Crecorian and councilor Bob Blumenfield. The commission’s proposal, if approved, would move Raman or Crekorian to the new West Valley area – an idea that infuriated supporters of both councilors.

Krekorian and Raman have repeatedly argued that the commission’s proposal would deprive voters who voted for them in last year’s elections. On Tuesday, both councilors complained about the commission’s chairman, Fred Ali, saying the commission had made important decisions in secret and confused voters by failing to number their constituencies.

“It was an incredibly confusing, frustrating and sad process for people who felt that they were deeply, deeply involved in this city,” Raman said.

Ali challenged the characteristics of Raman and Krekorian, saying the commission’s decisions had received a public vote. And he defended the proposed map, stating that it retains the political voices of blacks and Hispanics, places Koreatown in one borough, and, among other things, establishes 5.7 boroughs in the valley.

“No card is perfect, and we are not claiming that this one,” he said at one point. “But he achieves his important goals. [by] public.”

By the time Tuesday’s meeting ended, Raman had written nine proposals to change the commission’s map, many of which were aimed at preserving part of her Hollywood Hills neighborhood. Krekorian prepared a few more.

While some councilors worked to rebuild their neighborhoods, others took steps to claim economic assets.

City Councilor Marquis Harris-Dawson, representing a portion of South Los Angeles, has drafted a proposal to move USC from councilor Curren Price’s area to his own. Price, in turn, made a proposal to prevent the transfer of the exhibition park, located next to USC, to the Harris-Dawson area.

The 38 redistribution proposals will be considered on Friday by a new special committee of the Constituency Redistribution Board, which will include seven members: Martinez, Raman, Crecorian, Blumenfield, Price and councilors Mitch O’Farrell and Kevin de Leon.

Of these seven members, four were appointed as members of the Constituency Redistribution Commission, who voted against the commission’s proposed card.