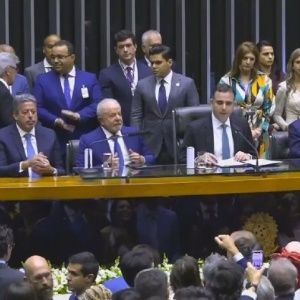 Luiz Inacio Lula da Silva took office this Sunday for a third consecutive term as head of Brazil’s presidency, after winning an October 30 election against outgoing President Jair Bolsonaro, who left the country on October 30. December , bound for the United States of America (USA)

What are the objectives of the Lula government in Brazil?

At 3:05 pm local time (17:05 UTC) Lula was sworn in as the new President of Brazil for a third term, following those from 2003–2007 and 2007–2011. Rodrigo Pacheco, president of the Senate and Congress, soon proclaimed him as president in full exercise of his functions.

According to information from the Military Police of the Federal District (PMDF), the Praça dos Tres Poderes, the place where the change of command takes place, reached maximum capacity for the ceremony this Sunday around noon. The limit for the event was 30,000 people. For security reasons, the public will no longer be able to access the site.

The President drove to the venue in a convertible car, where he would be greeted by representatives of other organs of power in the country.

The only session of the National Congress that is presided over by Rodrigo Pacheco, President of the Senate and Congress, with Luiz Inácio Lula da Silva and Geraldo Alcamín taking office as President and Vice President.

He opened the season by paying tribute to the death of the King of Soccer, Pele, and Pope Emeritus Benedict XVI. A minute’s silence was requested.

After being sworn in, Lula made his first speech as acting president.