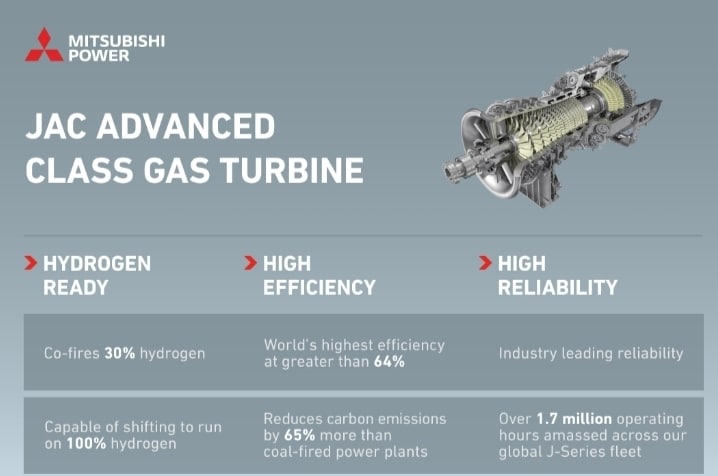 In addition, the Model M501JAC gas turbines used for long-term demonstration works commencing in July 2020 at the T-Point 2 Gas and Steam Power Plant Verification Facility on the property of Takasago Machinery Works in Hyogo Prefecture were recently completed. Reproduces results of over 8,000. AOH. This achievement provides further evidence of the reliability of the JAC Series gas turbines.

The GTCC power plant project in Thailand is a joint venture between Gulf Energy Development Public Co Ltd and Mitsui & Co Ltd to build and operate two large-scale power plants, one in Chonburi Province and the other in Rayong Province. The plant uses eight M701JAC gas turbine units with a total Production A combined 5,300 megawatts (MW). The first units delivered, now exceeding 8,000 AOH, entered service at the plant in Chonburi Province, about 130 kilometers southeast of the capital Bangkok, in late March 2021. This power plant already operates three M701JAC units.

Toshiyuki Hashi, MHI Senior Executive Fellow and Head of the Energy Transition and Power Headquarters of Energy Systems, said the JAC series gas turbines at these two plants have achieved high reliability and efficiency, reaching up to 8,000 hours of operation.
“We believe that the JAC Series gas turbines, which are capable of providing clean energy with high efficiency through the use of hydrogen fuel, will play an important role in realizing a carbon neutral society in the future,” they said in a written statement. Thursday (15/9/). 2022).

The JAC Series gas turbines take advantage of a high turbine inlet temperature of 1,650 °C, providing a world-leading power generation efficiencies of 64%, the highest level for power generation. Since the commercial launch of the J series gas turbines (which includes the JAC series) in 2009, orders from customers in Japan and around the world have been steadily increasing, reaching a total of 92 units. Of these, 52 are currently in commercial operation, taking the combined operating hours for the J Series to over 1.7 million hours in total.