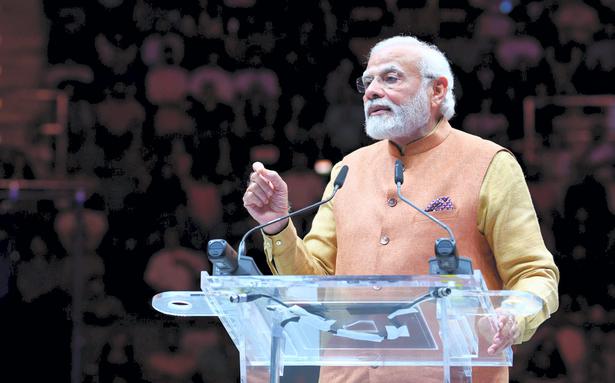 Prime Minister Narendra Modi on Sunday said the youth of today and the generations to come should never forget the dreadful period of Emergency, saying there was an attempt to crush the country’s democracy.

“It was the month of June (1975) when Emergency was imposed. In it all the rights were taken away from the citizens of the country. One of those rights was ‘right to life and personal liberty’… an attempt was made to crush India’s democracy at that time. The country’s courts, every constitutional institution, the press were kept under control,” he said during his “Mann ki Baat” address.

The Prime Minister said that the condition of censorship is such that nothing can be printed without permission. “I remember when famous singer Kishore Kumar refused to appreciate the government, he was banned. His entry on the radio was terminated. But even after lakhs of attempts, thousands of arrests and atrocities on lakhs of people, the faith of the people of India in democracy has not shaken… Said.

Shri Modi said, “During the Emergency, I had the privilege of being a witness; to be a participant in the struggle of the countrymen as a soldier of democracy.”

The Prime Minister said that around 200 crore COVID-19 vaccine doses have been given in the country so far, asking people to take a booster shot after the second dose.

Highlighting the country’s recent achievements in the space sector, Shri Modi said that one of them was the creation of an agency called In-Space. “Till a few years ago, in our country, in the space sector, no one thought of start-ups. Today their number is more than a hundred. All these start-ups are working on ideas… Chennai And Hyderabad has two start-ups – Agnikul and SkyRoot! These start-ups are developing launch vehicles that will carry small payloads into space. Through this, the cost of space launching is expected to come down significantly,” he added. .

Hyderabad-based Dhruv Space is working on satellite installation and high-tech solar panels for the satellites. “I also met Tanveer Ahmed of Digantara, another space start-up who is trying to map the waste in space. I have also given him a challenge to develop work techniques, which will solve the problem of waste in space. Both Digantara and Dhruv Space are going to make their first launch from ISRO’s launch vehicle on 30th June. Astrom is manufacturing small and affordable flat antennas in Bangalore.

The Prime Minister said that around 750 school students in the country, mostly from small towns, were working on 75 satellites.

Regarding the field of sports, Shri Modi said that Olympic gold medalist Neeraj Chopra once again won the gold medal in the Courtenay Games. He broke his own record in javelin throw. “Even in the recently played Khelo India Youth Games, our players have set many records… 12 records have been broken in these games – not only that, 11 records have been registered in the name of women players,” she said. Many geniuses came from very simple families.

Referring to the increasing dominance of Indian players in the sports world, the Prime Minister said that in addition to the Olympic Games, five indigenous sports – ‘Gatka’, ‘Thang Ta’, ‘Yogasan’, this time Kalaripayattu and Mallakhamb will be included in the Khelo India Youth Games. to be done. He also appreciated mountaineer Poorna Malavath from Telangana for completing the 7-peak challenge

On the cleanliness drive, Shri Modi appreciated the efforts of local agencies, voluntary organizations and people to clean the Chitte Lui River in Aizawl. He said, “Actually, this river and its banks were full of plastic and polythene waste. The organization working to save the river decided to build a road using polythene… that is also cleanliness and development.” Efforts were made in Puducherry where organic waste is made into compost and the rest is recycled.

Appreciating a group of Chartered Accountants who revived a stepwell named “Sultan Ki Baoli” in Udaipur, Rajasthan, Shri Modi talked about the importance of rainwater harvesting and water conservation.

Stating that the famous Yatra of Lord Jagannath would begin from July 1, the Prime Minister said that every year Jagannath Yatras are taken out in Odisha and many other states. He said, “Ashadha Dwitiya, also known as Ashadhi Bij, marks the beginning of the new year of Kutch on this day. I also wish all my Kutchi brothers and sisters a very Happy New Year.” Ashadha Dwitiya started the Sanskrit festival in Gujarat.

Referring to the upcoming Amarnath Yatra, the visit to Pandharpur in Maharashtra, he said, “There is no such distinction between the poor and the rich, high and low in all the Yatras (pilgrimages) in our country…” Sabarimala Yatra. Shri Modi said, “If you too go on such a journey, you will get a glimpse of Ek Bharat- Shreshtha Bharat along with spirituality.”