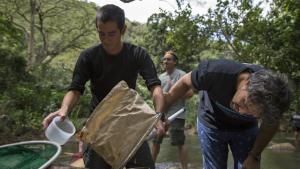 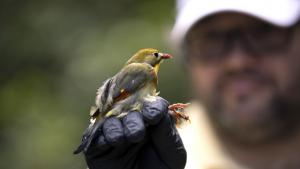 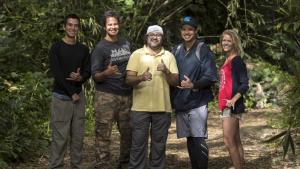 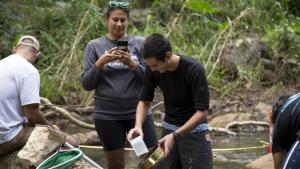 The key to saving endangered species and improving the ecology of our communities may be found in the thousands of microbiomes and microbes that ocean researchers examined from the summit of the Waimea Valley watershed on Oahu.

A team of researchers from the University of Hawaii at the Manoa School of Ocean and Earth Science and Technology (SOEST) conducted this massive field expedition sampling more than 3,000 microbes and microbes from the ocean of Waimea Bay to the deepest part of the Waimea Valley . , Their investigation revealed three major discoveries: how microbes follow the food web, most of the microbial diversity in a watershed is maintained within soil and stream waters, and the local distribution of a microbe predicts how it is globally distributed. is delivered. Their findings were recently published Proceedings of the National Academy of Science,

“Bioblitz” of a variety of specimens

The research team conducted a microbiome “bioblitz”—a close to complete census of all environmental substrates and potential hosts of microbes within the watershed. They took more than 3,000 samples from the wet summit of Puu Kenapua, the lower floodplain of the Waimea Valley and even the clear waters of Waimea Bay. The researchers collected samples from the soil; stream and sea water; animals, including rats, crayfish, mosquitoes and sea urchins; and plants, including trees, ferns and algae; and many more. They extracted and sequenced more than 800 million microbial DNA “barcodes” to determine which microbes were present.

“Understanding the sources of shared microbial diversity in ecosystems allows us to better understand the origin and assembly processes of symbiotic microbes and their role in the conservation of biodiversity and ecosystem services,” he said. Anthony Amendlead author of the study and associate professor at the Pacific Biosciences Research Center (PBRC). “If we want to restore native plants and animals to an area, we may also have to think about restoring the source environment for their microbiome. Microbiome is yet another way that organisms are connected to the environment.” ”

When the team assessed where the greatest diversity of microbes was found and where there were fewer species, the structure followed a food web—many types in soil and water, less in plants and still less in animals.

“Furthermore, microbes found in animals are thought to be a subset of microbes associated with plants and microbes on plants are thought to be a subset of microbes in soil, water and sediments,” he said. Sean Swift, study co-author and doctoral student in the UH Manoa Marine Biology graduate program. “It’s as if plants collect their microbiome from the environment and then animals select their microbiome from plants. The microbiomes of organisms are generally a subset of organisms that are lower in the food chain.”

An obvious means of assembling a microbiome is to acquire microbes from a related host – for example, a human mother shares her microbiome with an infant.

“However, this model is insufficient to maintain the microbiome in a dynamic landscape,” said nicole hynson, Associate Professor in PBRC at SOEST. “Many plants and animals are sparse, seasonal or ephemeral, which requires their symbiotic microbes to be able to live in an alternatively nearby host or environment. We found that soil, sediment and water are reservoirs for microbial diversity. Work as – provide environmental waiting rooms for microbes when they are available.

“Waimea Valley with only one or two organisms or microbes occurring in the environment is unlikely to be globally widespread,” said Craig Nelson, Daniel K for Microbial Oceanography. Co-author and Associate Research Professor at the Inouye Center: Research and Education and Hawaii Sea Grant. “Some microbes were widespread in Waimea and have probably adapted to all types of hosts and habitats. Our analyzes demonstrated that those generalist microbes were also the most widely recovered from diverse habitats around the world.”

Recent work sheds light on the diversity and distribution of the microbiome at a landscape scale, an approach made possible by the unique composition and habitat diversity of the Hawaiian watershed.