Maruti has launched a new color variant of this luxury car, you will not be able to take your eyes off its interior.

Maruti Suzuki India Limited recently introduced its all new Grand Vitara. Now the company has launched this luxury SUV in the South African market. This model has been made in India only. This is the new color variant of Grand Vitara. It has a new white color and black roof. Let us tell you that both Maruti and Toyota have jointly prepared the Grand Vitara. This car of Maruti has replaced the S-Cross. The company will launch this official in September 2022. In India, this car will be sold from Nexa dealerships. It was presented on the occasion of the 7th anniversary of Nexa. It will be launched in South Africa in 2023.

What is special in the new white color of Maruti Grand Vitara?

, This variant of Grand Vitara comes with some first-in-segment features along with sporting Nexa’s signature design crafted futurism, new advanced exterior design and interior equipment. The Grand Vitara measures 4,345mm in length, 1,645mm in height and 1,795mm in width. Its wheelbase is 2,600mm.

, The exterior gets a large NEXWave grille, which is made in high gloss black with chrome accents, 3 element LED DRLs, integrated turn lamps and 3 element LED tail lamps. It has body cladding, 17-inch alloy wheels. The Grand Vitara is offered in 8 monotone shades and three dual-tone color options. , Both Maruti Suzuki and Toyota have jointly developed the Highrider and Grand Vitara. Like the highrider, the Grand Vitara has a mild-hybrid powertrain. This is a 1462cc K15 engine that generates around 100 bhp power at 6,000 RPM and 135 Nm torque at 4400 RPM. It gets a mild hybrid system and is mated to a 5-speed manual or a 6-speed torque converter automatic. This powertrain is also the only engine with AWD option till date.

, The Grand Vitara Intelligent Electric Hybrid powertrain is also borrowed from Toyota. It is powered by a 1490 cc 3-cylinder petrol engine that makes around 91 bhp at 5500 rpm and 122 Nm at 3800-4800 rpm standalone. It is mated to a synchronous AC motor capable of 79 bhp and 141 Nm. This powertrain only gets an e-CVT gearbox. The mileage of Maruti Grand Vitara Hybrid SUV is 27.97 kmpl. 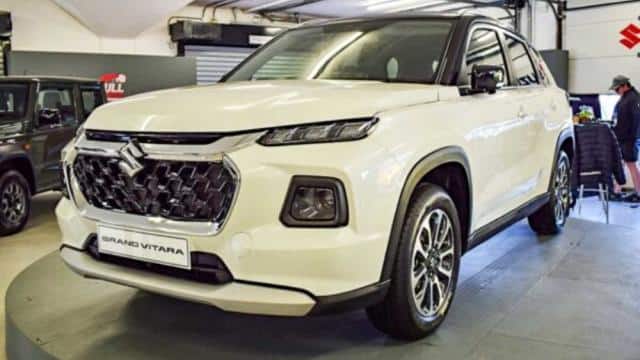 360 degree camera Maruti is offering the feature of 360 degree camera in the new model of its cars. This feature will also be available in Grand Vitara. This will help the driver more in driving the car. This will not only help the driver to park the car in tight spaces but will also help in avoiding difficulties on blind roads. You will be able to see the view around the car on the screen.

Panoramic Sunroof: Maruti has given a panoramic sunroof in the recently launched New Brezza. It has also become the first car of the company to have this feature. In such a situation, now the Grand Vitara will also get a panoramic sunroof. How big its size will be, it will be known only after launching. It will come with automatic feature. However, the layer below it may need to be opened manually.