Maruti’s big, bold and beautiful Alto will be launched next month; You will decide to buy by looking at it Maruti will unveil its all new Alto next month. New Alto has been flashed 2 times in last 7 days. First, during the shooting of TVS, some people are seen surrounded. During this time, both the Alto 800 and the other Alto K10 were seen. However, there is no official statement from the company about the launch yet. It is sure to start selling during the festive season. The new Alto looks bigger, bolder and more stylish than its current model. Its boot space was visible during the last photo. Overall, the new model of the Alto can push small hatchback cars. Let us tell you that Alto is one of Maruti’s best selling cars. It was first launched in 2000.

The TVC has unveiled the design of the shoot
It was certain that Maruti will launch its new Alto soon, but for how long is not clear. In such a situation, the launch of the TVC shoot of the next generation Alto seems to be coming forward. It is expected to launch just before the festive season. Sources connected to the auto market say that Maruti has started production of the Alto at its Gurugram plant. The new Alto looks taller and wider than the current model. At launch, all its features will be covered.

Also Read- One Year Complete Of This Luxury Car, People Buy 2386 Units Every Month; Now more features are available at the old price


Only the back of the Alto was visible
The rear of the Alto is visible in the photo that surfaced during the TVC shoot. At first it looks like a Celerio. Alto is written on the back left side. All the lights are kept at the back. That is it will get indicator light with back light. One of the two models is the Alto 800 and the other is the Alto K10. Both will have the same design except for the engine. It has rim wheels. The front bumper is visible from the side, it is clear that it has been redesigned. It is clear that it will be wider than the current model. 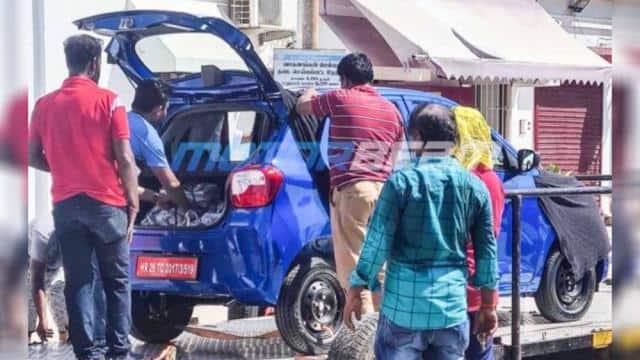 
>> Talking about the features of 2022 Maruti Alto, many features will be kept keeping the young generation in mind. It can get many features like onboard touchscreen infotainment screen, semi-digital instrument console, keyless entry. The dashboard layout and seat upholstery are also expected to be updated in the new model.


>> Maruti is expected to offer a 796cc, naturally aspirated petrol engine that produces 47 bhp and 69 Nm of peak torque. This engine will be mated to a 5-speed manual gearbox. The new Alto will also be powered by a new 1.0-litre K10C NA petrol engine that will generate 66 Bhp and 89 Nm of peak torque. This unit will be offered with a 5-speed gearbox as well as a 5-speed AMT option. 2022 Maruti Alto will cost more than the current Alto.