Mathematical calculations at the speed of light 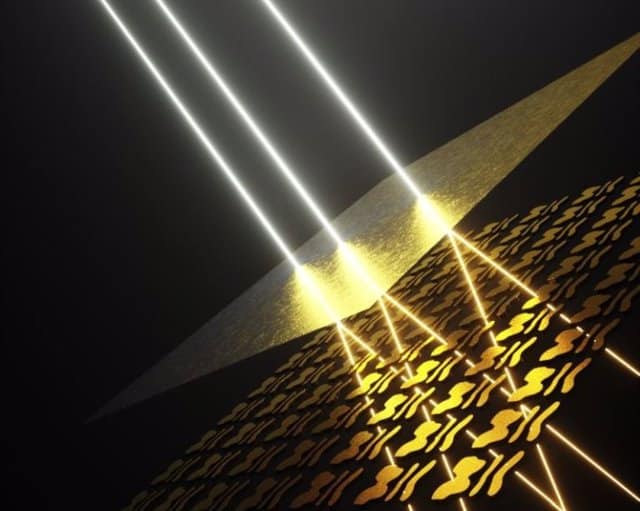 Researchers have created a nanostructured surface capable of solving equations using light, expanding the field of analog processing based on optical metasurfaces.

The team, made up of scientists from the AMOLF Institute for Fundamental Physics, the University of Pennsylvania and the City University of New York (CUNY) in the Netherlands, published their findings in Nature Nanotechnology.

The growing global need for efficient computing has prompted researchers in various fields to seek alternatives to the current digital computing paradigm. “The processing speed and energy efficiency of standard electronics have become limiting factors for new disruptive applications entering our daily lives, such as artificial intelligence, machine learning, computer vision and many more,” Andrea Cordaro, a student at AMOLF, said in a statement. others.” lead author. “In this context, analog computing has re-emerged and received significant attention as a complementary path to traditional architectures.”

Optical analog processing refers to the use of light to perform analog calculations, in contrast to traditional electronic methods that use electricity. One of the main advantages of using light to perform specific computing tasks is that it can operate at much higher speeds than electronic methods, as the computation is performed at the speed of light through very fine nanostructured surfaces called metasurfaces. travels through.

In addition, optical analog processing can be more energy efficient than electronic methods, as it does not generate heat in the same way that electronic circuitry does. This makes it ideal for high-performance computing applications where speed and power efficiency are important.

“In a previous article we showed that it is possible to use an optical metasurface to very quickly detect edges in an input image. Detecting the edges of objects – such as cars, people, etc. – is an important part of image processing in many applications. The first step is that doing this step optionally can save processing time and energy.”

Cordaro and his colleagues realized that they could also use metasurfaces to perform other mathematical operations. One of the most frequent classes of problems arising in many fields such as engineering, science and economics are called “linear inverse problems”. They are usually made of inverting matrices, which are quite slow mathematical operations,” he explains.

The team of researchers developed a microscopic dielectric nanostructure called ‘metagrating’, and incorporated a semi-transparent mirror into the sample to reflect the signal back to the nanostructure, each time multiplied by the metagrating scattering matrix.

“We use a special optimization technique to design a nanostructured array unit cell, or metagrating, that can perform the desired matrix multiplication,” says Cordaro. “Each math problem requires a specific design for the metagrating, but in principle a surface with multiple parallel grids can be designed to solve multiple integral equations in parallel.”

These results demonstrate the possibility of solving complex mathematical problems and generic matrix inverses at much higher speeds than typical digital computing methods. In fact, the solution converges in about 349 fs (which is less than one billionth of a second), orders of magnitude faster than the clock speed of a conventional processor.

Cordaro says: “We have demonstrated a powerful new nexus between nanotechnology and analog computing that could pave the way toward hybrid electronic and optical computing circuitry. By continuing to develop our ideas, we hope to achieve more than speed and efficiency.” Will be able to solve complex problems. Before unimaginable.”