Matt Stafford, ever the gentleman, says he’s thankful for the Fords and still in touch 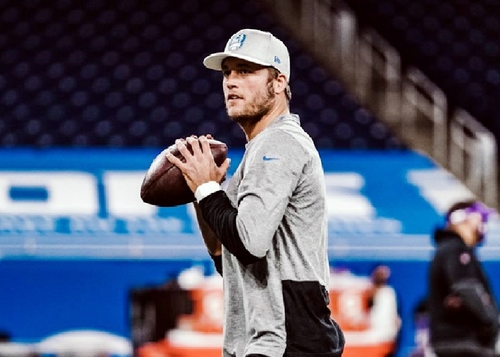 Matthew Stafford is giving us all a lesson in grace.

Instead of saying “I told you so” to the franchise and city he left behind for a potential Super Bowl title, he’s saying “thank you” — even to the ownership many say set him up to fail.

At a news conference this week, the 34-year-old said he’d be playing for more than himself Sunday, shouting out the Fords, with whom he says he’s still in contact.

“I think we’re all playing for not only the guys in this locker room, but the people who have helped us get to this position,” Stafford said. “And there are so many people in Detroit, important people in my life, who have helped me get here.”

That includes the Ford family, wich he said was “unbelievable in giving me the opportunity to even come into this league and play this game that I love.”

At The Detroiter Bar near Greektown, people have reportedly been watching Sunday games while sporting old Lions No. 9 jerseys and even Rams jerseys. 97.1 The Ticket morning show host Mike Stone, or Stoney, estimates 65-70% of his callers are rooting for Stafford.

Hernández says part of what drives the support is Stafford and his wife Kelly’s do-gooder reputation here. The pair have donated $2 million to Mitch Albom’s SAY Detroit charity — conceived of in 2006 when the writer saw the city temporarily step up homelessness interventions for the weekend it hosted the Super Bowl. The Staffords also volunteered at SAY.

The organization’s chief operations officer shares a story he said encapsulates what Stafford was about:

… a couple of years ago … the organization auctioned opportunities to catch passes from Stafford.

When Stafford threw to the auction winners, Rosenthal noticed he grunted every time he delivered a pass.

The cartilage in Stafford’s ribs was damaged.

Stafford’s threshold for pain and sense of responsibility gained the respect of Detroit. With the Tigers, Red Wings and Pistons in decline, Stafford was the city’s most popular athlete in his final seasons with the Lions.

“He always tried to play, regardless of what he was feeling,” (Detroiter Bar manager Tyler) Tucco said. “He always gave 100% instead of sitting out like most players do nowadays.”