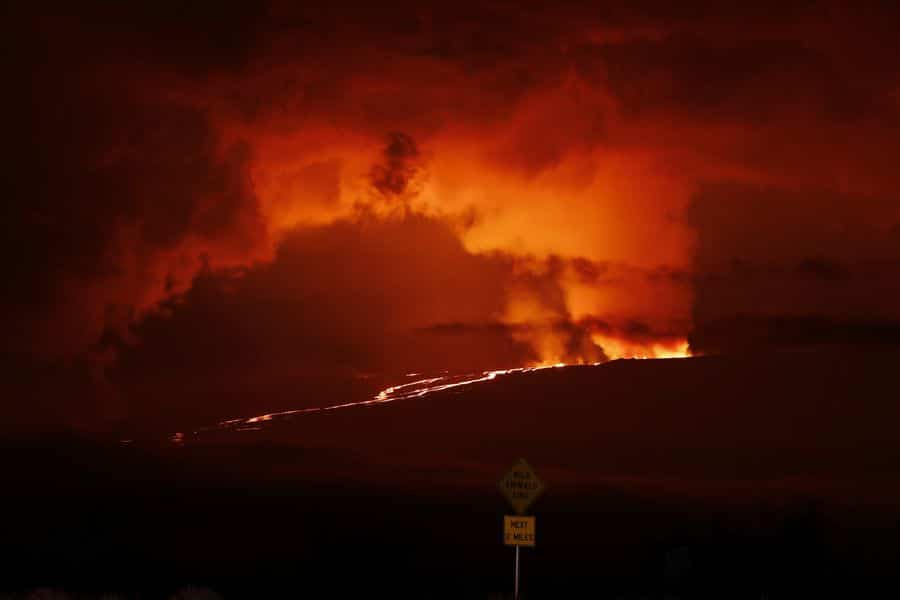 The current status of Villarrica volcano is of extreme concern, The National Geology and Mining Service (Sernejomin) decided to set a yellow alert (with a high probability of going up to orange) while maintaining a restricted radius for access less than 500 meters from the volcano.

During the last few days, there have been “Seismic Shots” With over 20 aftershocks in the area, all of volcanic origin. in present It is considered the most dangerous in Chile, It is considered number one in the specific risk ranking of active volcanoes in Chile and one of the volcanoes with the highest historical record of eruptions in South America.

Hawaii is 10,839 kilometers away, The North American state where the world’s largest volcano is located El Tremible Mauna Loa. In fact this demon flared up during the last day. Lava, volcanic gases and ash continued to threaten the island’s residents since Sunday night. The last occurrence of these features was recorded in 1984, at an altitude of 4,169 m.

The US Geological Survey stated that the lava is contained within the summit and does not currently pose a threat to Hawaiians living below the slope. The service warned residents on Monday that volcanic gases and fine ash They can flow.

Considering both the risk and the current state of volcanic activity, What is the connection between these two terrifying “rock giants”?

is found in the initial answer Pacific Ring of Fire, One of the subduction zones off the coast of the Pacific Ocean, characterized by some of the most important and active seismic and volcanic zones in the world.

Both Mauna Loa and Villarrica are found on it. it covers the entire coast of peacefulBegins in Chile, travels through Central America, Mexico, the United States, passes through the Aleutian Islands, and then descends along the coasts of Russia, Japan, Taiwan and the Philippines, until it reaches New Zealand Would have reached

Pablo Salucci, a geographer at the Catholic University and an academic at the University of San Sebastian, explains that when analyzing the positions of the Villarrica and Mauna Loa volcanoes, we can see that the two are in very different positions. “This is because Chile is on yellow alert, as it has registered an increase in its seismicity and minor eruptions. For its part, located in Hawaii is in an eruptive process after about 40 years, which This will be red alert as per our alert system,

When comparing the two volcanoes, it is important to observe their geomorphic features. “On the one hand, Villarrica corresponds to a continental volcano of the “stratovolcano” type, which has built itself up during various eruptions over the years, giving it a very distinctive conical characteristic. It has had repeated eruptions over the past 20 years. Its volcanic activity responds to the subduction that occurred between the Nazca plate and the South American plate”, explains Salucci.

“The only element that “connects” them is that both meet and are part of the Pacific Ring of Fire, where most of the planet’s volcanic activity is concentrated,” says the geographer.

Salucci established that Mauna Loa is a volcano located in the middle of the Pacific Ocean and that it is of the volcanic hotspot type, meaning that it originated, like the Hawaiian Islands, from a hot spot in the ocean. Volcanic material that manages to reach the surface from the ocean floor forms these impressive volcanic edifices. From a geomorphological point of view, the volcano is of the “shield” type, which is characterized by very wide volcanic edifices, but without the conical shape, and with very liquid lava that can move several kilometers per day,

Salucci argues that Seismicity observed in the last days at Villarrica volcano, “Corresponds to the seismicity that is associated with the movement of liquids and gases inside it, when the level of their activity increases with pressure changes inside the volcano, moving and breaking the rock inside the volcanic edifice. This For this reason, when a volcano’s activity level increases, it is possible to observe this type of seismicity, which can be detected and evaluated by the corresponding technical alerts (Ovdas-Sernejomin and Civil Alerts (Onemi)). To be mechanically monitored.

Felipe Aguilera, director of the Millennium Institute for Volcanic Risk Research – Sekellar Volcano and an academic at the Universidad Católica del Norte, says that The volcano is currently with a super high magma column, “What we see is a lava lake, so the current state of activity of the mass is very similar to what happened in 2015 after the last major eruption. That is, the magma column rises and the lava lake appears, as well as large bubbles accompanied by the rise of volatiles that are released as igneous rocks, which in turn cause smaller eruptions that are known in volcanic ‘speak’ as Strombolian eruptions”.

When observing the last earthquakes registered at the volcano, the so-called “seismic shot” is observed, indicating a significant increase in registered volcanic earthquakes. This Corresponds to the current level of alert with which the volcano is located immediately. “In this sense, the Yellow Alert indicates that there is instability in the massif, with minor eruptions, the presence of fumaroles and an increase in its activity, giving reports on the state of the volcano twice a week,” says Salucci.

The latter establishes that this does not indicate that we are facing an imminent explosion, but that we should be alert to possible changes in the coming weeks or months. “Let’s not forget that given the danger of this volcano (the most dangerous in Chile, according to Cernejomin’s specific risk ranking of active volcanoes), it is constantly monitored and for this reason the municipalities involved have action plans and evacuations. There are territories and meeting points.” .

Aguilera believes that these eruptions, which occur during the day, also see a considerable amount of gas and spectacular “fireworks” are seen at night, the products of which Activity expected in an active volcano like Villarrica, Smaller eruptions with what is happening today, material that begins to accumulate in the crater, may be part of a process that goes on for several weeks with a column of lava and eruptions, and is not necessarily accompanied by a larger eruption. Are. It may happen that there will be a big discharge like in 2015, but we don’t know yet with the content.

Salucci explains that Villarrica is close to two fault systems which intersect on its southeast flank, which is in line with the Liquine–Oqui fault system and the Mocha–Villarika fault, which generate their own seismicity, as seen in previous seismic events, such as the September 23 earthquake. happened on. 2018 with a magnitude of 3.2. It is important to mention that the currently observed seismicity corresponds to the movement of internal fluids and would not be related to the above faults.