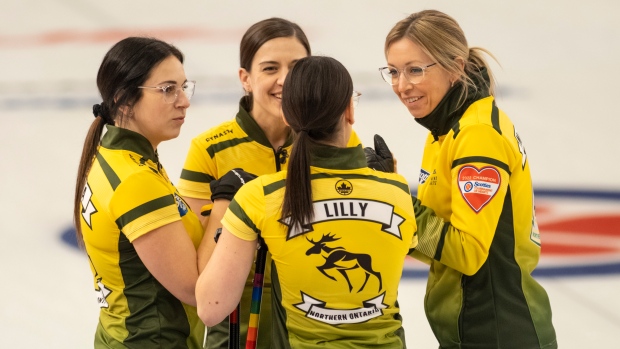 Andrea Crawford thought she had the win until Krista McCarville snatched it away.

McCarville’s rink from Northern Ontario battled back from a four-point deficit to steal a point in the extra end to defeat Crawford’s New Brunswick team 9-8 Saturday night and earn a trip to the final of the Scotties Tournament of Hearts.

McCarville made two brilliant shots in the eighth end to climb back into the Page playoff 1 versus 2 game at the Canadian women’s curling championship in Thunder Bay, Ont. Crawford had a chance to win on her last rock but she hit and rolled out, giving McCarville the victory.

“We always say we’re never going to give up,” said McCarville. “If we can take them to the 10th end we’ve done our job even if we lose.

“We’re good at battling and that’s what we did. We knew we could work our magic. That three in the eighth really gave us that jump we needed.”

Crawford opened the scoring drawing with two in the first end. McCarville used her last rock in the second end to remove two New Brunswick stones to count three.

Crawford regained the lead with another draw for two in the third. In the fourth, she heaved a sigh of relief after navigating a narrow port to remove a Northern Ontario stone. McCarville missed the following takeout, giving New Brunswick a steal of one and a 5-3 lead.

Northern Ontario rallied in the eighth end. McCarville removed two New Brunswick stones with a raise on her first shot, then took out another on her final to score three points and slash the lead to 7-6.

Crawford had a chance for two in the ninth but had to settle for a single when she came up short on a draw. That made the score 8-6 but gave McCarville the hammer in the 10th end.

McCarville scored two in the 10th to force the extra end.

A disappointed Crawford said her rink has to prepare for Sunday’s semifinal.

“We’ve had other tough games, you need to be able to park those. I’m confident we’ll be able to do that.”

McCarville, the hometown favorite who plays out of the Fort Williams Curling Club, drew cheers all night from the crowd of around 275 allowed into the building under COVID-19 protocols.

“It would mean the world to win it here,” said McCarville. “It would be the most amazing dream in the world.”

Crawford, appearing in her first playoffs in her 10th trip to the Scotties, finished the round-robin portion of the tournament second in Pool A with a 6-3 record.

The last rink from New Brunswick to reach the Scotties playoffs was Heidi Hanlon, who lost the 1991 final to BC’s Julie Sutton. The only New Brunswick rink to win a Canadian women’s curling championship was skipped by Mabel DeWare in 1963.

McCarville, making her ninth Scotties appearance, was third in Pool A at 5-3. She lost in the 2016 final to Chelsea Carey’s Alberta rink and finished third in 2010.

Einarson, the two-time defending champion, kept her dream of a three-peat alive with an 11-6 win over Tracy Fleury’s Wild Card 1 rink in the Page 3 versus 4 game Saturday afternoon.

That match turned in the sixth end when Fleury missed on a chip shot. With her last stone, Einarson calmly took out Fleury’s rock to score four points and take an 8-5 lead. It was the 14th time during the tournament Team Canada scored three or more points in an end.

Einarson sealed the win by stealing two in the next end.

“We made all our shots,” said Einarson. “We got a couple of misses out of them.

“We’ve been playing really all week putting lots of pressure on the opponent.”

“I just had a couple of misses at the wrong time and Team Canada capitalized and they made a lot of shots,” she said.

Einarson’s rink of third Val Sweeting, second Shannon Birchard and lead Briane Meilleur from Gimli, Man., were a perfect 8-0 during the round robin before losing 8-6 to Crawford in a playoff game Friday night. They are looking to join an elite group of rinks to win three consecutive titles.

Fleury’s team of third Selena Njegovan, second Liz Fyfe and lead Kristin MacCuish from the East St. Paul Curling Club in Manitoba finished first in Pool A during the round robin with a 7-1 record. They lost 8-3 to Northern Ontario Friday night.

Fleury didn’t play her first game of the championship until Thursday after being forced to isolate following a positive COVID-19 test before the tournament. Njegovan took over the skipping duties for the team that leads both the Canadian and world rankings.

Due to COVID-19 concerns the round-robin portion of the tournament was held in an empty Fort Williams Gardens without fans or media in the building. A limited number of volunteers registered for the competition and junior curlers from the area were allowed to attend the playoffs.

The Scotties champion will represent Canada at the 2022 Women’s Curling Championship in Prince George, BC, from March 19-27.

This report by The Canadian Press was first published Feb. 5, 2022.