Measles vaccination seeks to protect children from risk of reinfection 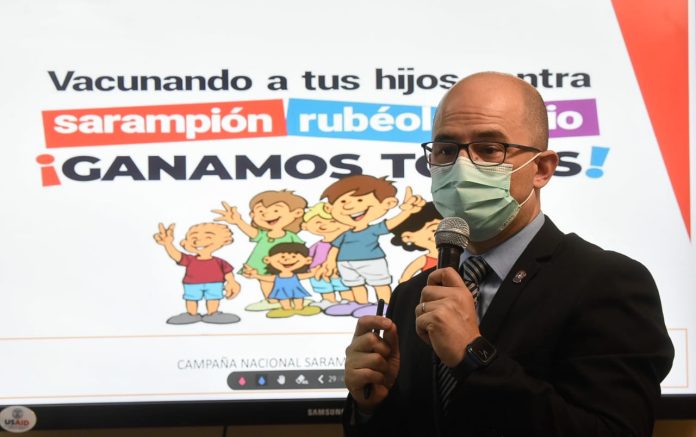 The National Immunization Campaign against measles and polio seeks to protect the child population, given the low coverage and risk of confirmed cases in neighboring countries.

Director of the Expanded Program on Immunization (PAI), Hector Castro indicated that the aim is not to create panic, but to remember the importance of vaccination.

He stressed that Paraguay has not recorded cases of measles, which is a product of vaccination, since 1998. However, the current scenario is one of low coverage, and with confirmed cases in Argentina and Brazil, there is an increased risk of transmission of the highly infectious disease among the child population.

The MMR/SR vaccine against measles also protects against rubella, a disease of which Paraguay has had no cases since 2005.

The current coverage of this vaccine is 47%, Castro told a press conference this Friday. He said the previous nationwide campaign had reached 72% coverage in 2014.

In the case of polio, one case of paralysis associated with the disease was confirmed in the United States in the week. The nationwide vaccination campaign also aims to increase coverage against the disease, which currently reaches 49% of the child population.

Dr. Castro said, “It’s a situation that deserves all the attention, we have a high number of children who are at risk of getting measles, rubella or polio because they don’t have vaccines.”

Since April, follow-up vaccination campaigns against these three diseases have been promoted, as well as vaccination efforts against COVID-19 and influenza.

In three months, the country-level coverage increased by 8%. Dr. Castro urged parents to bring their children to health centers to receive both vaccines: MMR/SR (against measles and rubella) and BOPV (against poliomyelitis).

‘Toolkit only information package, farmers are being made villains’: Nikita reaches HC with bail plea, toolkit linked to ISI