Meeting ‘angry’ after marchers collide with truck – BC News 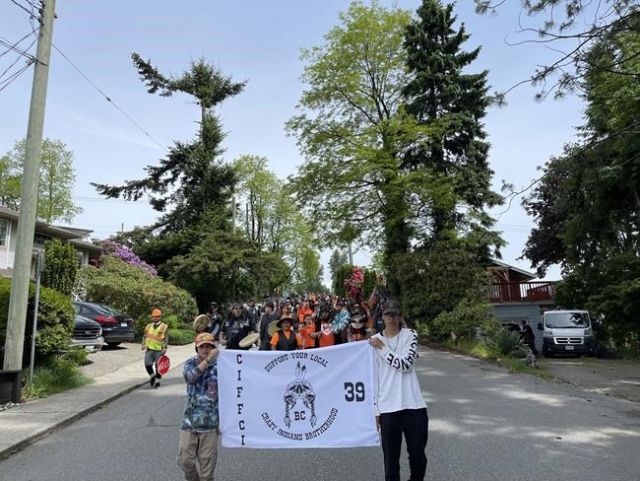 The head of an indigenous group says members have met with the RCMP in Chillivac to discuss what happened after the driver of a pickup truck allegedly hit four people participating in a memorial march How is the police planning to proceed?

Captain Garrett Dann of the British Columbia chapter of the Crazy Indians Brotherhood says the meeting at the Chime First Nation Band office lasted about four hours and at one point got “out of hand” as everyone sat in a circle.

Dan says there was anger over the alleged actions of a 77-year-old man who turned himself in on Monday, two days after some members of the group were allegedly killed while marching on the highway to attract the attention of survivors of residential schools. But was killed.

He says that Chime First Nation chief Andrew Victor initiated the meeting, where eight members of the Brotherhood met with four RCMP officers, including an inspector and sergeant, both from Chilliwack and the Mission Detachment.

Dan says Indigenous members were upset that the suspect was not in custody because they did not think they would be treated the same way.

The RCMP did not immediately respond to a request for comment.

Dan says Mounties reported that an investigation was underway to determine whether charges would be brought against the man who turned himself in after the incident.

Police said in an earlier news release that of the four March casualties, two had minor injuries.

The RCMP originally described the man in a news release as an “impatient driver” who did not march in the only eastbound lane of Lughid Highway, near the former St. Mary’s residential institution for Indigenous children. could do

Dan helped organize the weekend memorial march at the mission, and is said to have marched before the driver could walk.

“We never stopped the traffic, we slowed it down,” he said, with the driver telling people to stop the march and get off the road, “stuff like that.”

Dan says the march to the former institution was emotional as participants sought ground-penetrating radar to search the site for potentially unmarked graves of children who did not survive their forced presence at St.

Despite this, Dan says that a man in the pickup asked the marchers to “finish” residential schools.

Dan said, “Our people suffered a lot of trauma and abuse in the residential school and it’s not like they can clear it out.”

“It’s like telling the vet to recover from war.”

Indigenous leaders have called a meeting with the RCMP in Chillivac to discuss how police intend to proceed after four members of a memorial march were allegedly hit by a pickup driver on Saturday.

Garrett Dann, captain of the British Columbia chapter of the Crazy Indians Brotherhood, says the meeting will be attended by several Fraser Valley First Nations chiefs.

Dan helped organize a weekend memorial march at the mission to draw attention to the issue of residential schools, and says a man was leaving before the march began.

A news release from the Mission RCMP said that four people were killed, what police initially called an “impatient driver”, in the only eastbound lane of Lughid Highway, near the former St. Mary’s Residential School. Could not pass the marchers.

Two of the marchers suffered minor injuries, while the RCMP said a 77-year-old man came forward on Monday and his truck was confiscated for investigation, but he was not in custody.

Dan says the Mounties have said that the investigation takes time and has not given any indication that charges are pending.

Dan said, “They’re holding his truck more accountable than him. They kept his truck but they let him go home.” He is very upset with the police handling the case.

The march toward the former residential school was emotional, Dan said, as participants used ground-penetrating radar to search the site for potentially unmarked graves of children who did not escape their forced presence at St. .

Despite this, Dan said a man in the pickup asked the marchers to “finish” residential schools.

Dan said, “Our people suffered a lot of trauma and abuse in the residential school and it’s not like they can clear it out.”

“It’s like telling the vet to recover from war.”

Greene repeatedly compares the vaccine mandates to Nazi Germany, reprimanding her own party.