Men’s hockey: “Gophers” beat Alaska on the night of the first victories 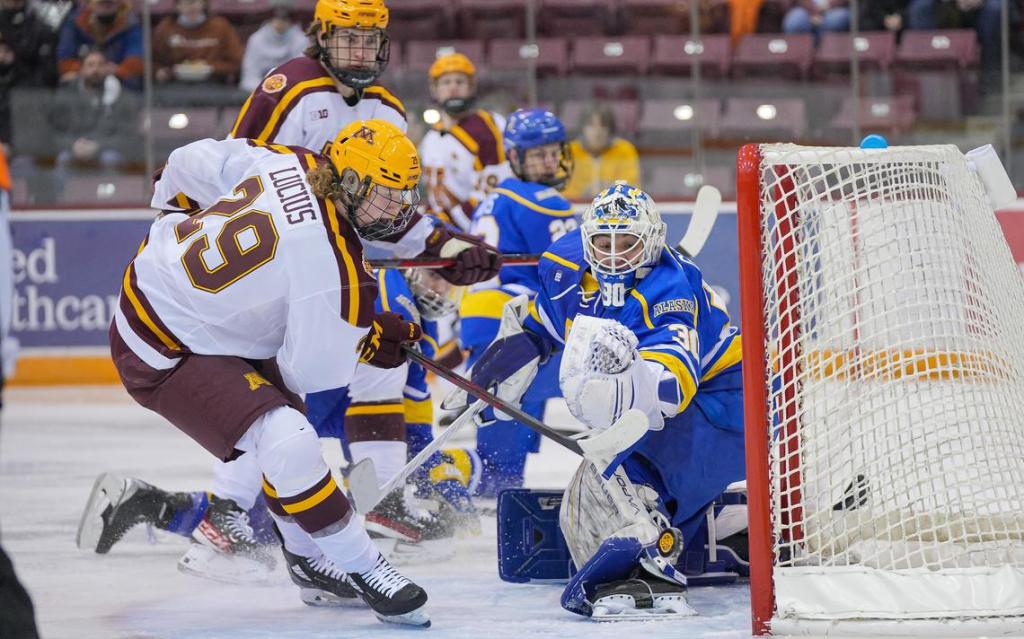 MINNEAPOLIS. The coaches and players of the Minnesota Gophers, despite all the oddities of the last five days, insisted that everything was going on as usual at the rink.

But Friday proved to be a night of big milestones for the Gophers as they took their first win in what looks like a restart of their season.

Tristan Broz and Jackson LaCombe scored their first goals of the season, while Justen Close took the win in his first start in goal and the Gophers took a 4-1 out-of-conference victory over Alaska at the 3M Arena in Mariucci.

This came after they lost their main goalkeeper in the starting lineup on Sunday, they lost two players to long-term injuries last weekend, they had COVID running through their dressing room and they played with an all-hands-on-deck squad. “.

“I love what we did in the second half,” Gophers coach Bob Motzko said. After the holiday break, his team won three games and two exhibition games. “Obviously a lot has happened this week, but I think we live in a time like this. You just have to accept it and move on.”

Broz played in his 18th collegiate game and scored twice before the holiday break, but appeared to be on the verge of his first goal in every game in the second half.

It was the first game for the Gophers (13-8-0 overall) since the sudden and unexpected departure of Jack LaFontaine, who had been their mainstay in goal for the past two-plus seasons, to the NHL. Close, a first-time junior, made 14 saves to win.

“Of course it was different without Jack, but we all trust Kloser. He’s been here, barely played for three years,” said defender Ben Brinkman, who assisted on three of the four goals. “We are all happy for him. He is a great goalkeeper, as you saw today.”

Blake McLaughlin and Matthew Nice added goals to the Gophers, who won their third game in a row. McLaughlin’s goal was one of the highlights and was assisted by longtime linemate Sammy Walker. This transfer earned Walker 100 points in his career.

“It’s incredible,” Walker said of joining the program’s Century Club. “This is a huge honor for the great players who came before me and were able to do this. Being in this category is special.”

The Gophers were missing forwards Rhett Pitlik and Jackson Nelson, who are both expected to miss several weeks with injuries. Defenseman Brock Faber, named to the US Olympic team on Thursday, was also unavailable on Friday. Defenseman Matt Denman dressed for the first time this season but did not receive a change of clothes. And new backup goaltender Owen Bartoszkiewicz was in shape for the first time, officially joining the Gophers just hours before the game.

The Gophers scored twice in the first period and twice in the third, but their coach felt they were slack in the middle of the 20th minute and praised the McLaughlin-Walker combination for bringing back momentum.