Articles can only be displayed with JavaScript enabled. Please enable JavaScript in your browser and reload the page.

Meta accounts, which may be an early spark for debut in Germany, should still be available in August.

Meta brings Horizon Worlds to Europe for the first time with new features. In which countries is the Social VR app launching?

Meta brings its Metaverse platform Horizon Worlds to Europe for the first time. The first countries will have access over the next few weeks, and more to follow later this year. Meta is also introducing a new feature designed to give users more control over their environment.

Horizon Worlds is Coming to Europe

Horizon Worlds launched in 2021 and is currently available on Oculus Rift(s) and Meta Quest 2 VR glasses. Quest 1 support ended in January 2022. Until now, only users over the age of 18 in the USA and Canada had access to the social VR app.

The age restriction remains in place. But the virtual gates will soon open for social VR enthusiasts in Europe. On the company’s Oculus blog, Meta announced that the social VR app will be rolling out to a growing number of users in England, Scotland, Ireland and Northern Ireland in the coming weeks.

Horizon Worlds: More control over your own environment

Meta is also announcing a new feature called “Voice Mode” which is set to launch in the coming weeks. This allows Horizon users to choose how they listen to people who are not on their friends list. 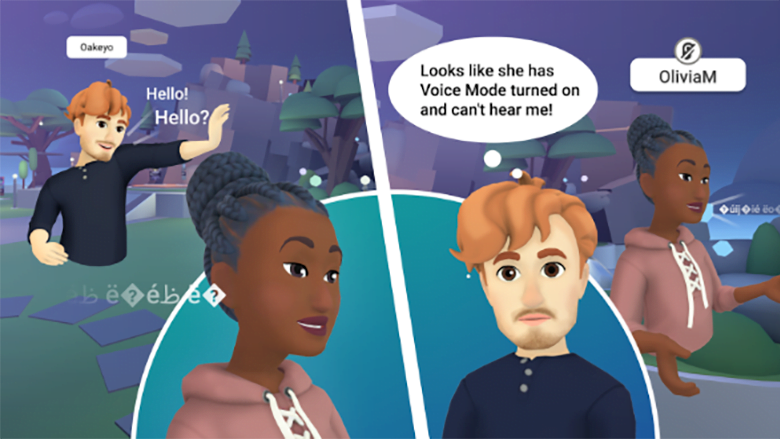 Unknown voices and unintentionally heard conversations can be distinguished and treated as “incomprehensible, friendly tones”. Muting can be temporarily interrupted by holding the controller by your ear for a while.

Anyone using the function receives a similar symbol on their avatar to let outsiders know they are not being listened to.

The Horizon platform, which includes Worlds and Horizon Venue, the meeting app Horizon Workroom and Horizon Home, is a central part of Meta’s Metaverse plans. To expand the number of users, the group is planning a major expansion of Horizon Worlds and is also looking to bring the platform to smartphones and consoles.

Meta also has big plans for Europe. Over the next five years, Facebook’s parent company wants to create 10,000 jobs in Europe to help build its own metaverse. To train the necessary specialists from scratch, Meta is also opening a Metaverse Academy in France. Courses are offered there for support technicians and developers for immersive technologies.

In addition to announcing the UK launch, Meta also emphasized in the blog post that Horizon Worlds is set to be available in additional European countries over the summer. Whatever is there remains open. A debut in Germany would come as a surprise due to an ongoing legal dispute with the Federal Cartel Office (BKartA).

Linking Facebook and Oculus accounts is a thorn in BKartA’s side. Furthermore, Meta abuses its market power in social media. The matter is currently in the European Court of Justice. You can read the full process in our Meta vs Germany Chronicle.

Currently Meta Quest 2 will not be sold in Germany. It is not known how long this ban will last.

You can normally buy Meta Quest 2 on Amazon France. tipo: Right-click on the web page and select “Translate”.

Information: You can order from Amazon France through your German account. The VR glasses support German language in the menu. A regional lock by Facebook is currently not activated – Quest 2 is functioning normally. Amazon France delivers within a few days, with some devices even shipped from warehouses in Germany.

Note: Links to online shops in articles may be so-called affiliate links. If you buy through this link, MIXED.de will receive a commission from the seller. The price does not change for you.

Meet the investors who are protecting sustainability and biodiversity, with a value of over $40 billion market consent

Meet the investors who are protecting sustainability and biodiversity, with a value of over $40 billion market consent

Mbappe reaches another dimension in Qatar