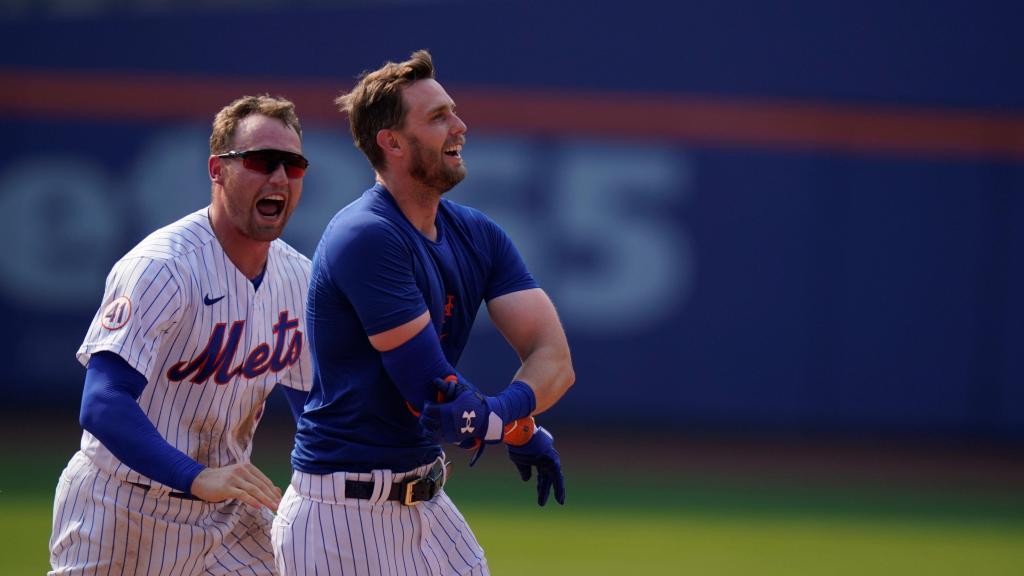 Brandon Nimmo dropped out of the Mets’ starting lineup for the third straight day on Monday.

Nimmo (wrist sprain) has not played in any capacity since Friday, including pinch hitting or a late inning defensive substitution, but is available from the bench.

“Brandon is doing some work in the cage,” Buck Showalter said before the opening of his series with the Nationals at Citi Field. Nimmo was also on the field during Monday’s warmup and testing things out.

Meanwhile, Jeff McNeil – who was ruled out of Sunday’s opening nine due to “wear and tear” on his feet, according to Mets manager – was back in the lineup as a designated hitter on Monday.

There isn’t much clarity on what McNeil has been dealing with since he was pulled from the seventh inning of Saturday’s game, but with the Mets already holding a comfortable lead in the division, the team has the luxury of caution. .

“McNeil feels good,” Showalter assured. “He has, in the past, pushed a few things and paid the price with it. Knowing the signs of something and deciding to back away from it, I think that’s what’s happening. He’s going through his body and his Understands feet.”

Showalter’s time in Major League Baseball has taught him many lessons and wacky things—which Mets fans have loved this season—and given him experience with a whole spectrum of situations. But while he’s not explaining things through some silly talk, Showalter is pretty serious about the game, especially when it comes to managing players’ workloads over long seasons.

The rubber-armed Wright took a ball with his bare hand during Sunday’s game and had to pull it out. There are no breaks or fractures anywhere on his hand, and it wasn’t much fun when he said the trainer put his dislocated pinky back in place, everything else seems to be going well.

“I guess it’s just a pain to bear now,” Smith offered. “We’ll let the swelling go down a bit. There’s some scratching. But other than that, we got away without anything serious.”

He ruled day to day on Sundays and the same resonated on Mondays.

“As of now, no,” he said when asked if he was headed for the injured list. “They’re going to try to give me a day or two. But there’s hope [Tuesday] It should be good to go.”

The Mets will be without Travis Jankowski (fractured arm), their best pinch runner and defensive outfielder off the bench, while he recovers from surgery he had last week to repair his arm. Jankowski held court in front of his locker on Monday after being told of a fracture in the fourth metacarpal of his left hand.

“Very shocked, very disappointed,” Jankowski said, then described the drama in San Francisco that pulled her out. “While playing line drive, diving, the glove got stuck just a little bit. I extended my finger, didn’t think about it at the time. After the game it moved a little.”

Recovery time is one thing, but for a player like Jankowski, who is at the bottom of the roster, it’s also a question of where he fits into the squad when he returns. The estimated time of his return is about five weeks, so it’s impossible to know what the Mets will look like at that point or how well his replacement will be playing, meaning Jankowski’s position on the 26-man roster will be up in the air.

“Two screws and five weeks, and I should be good to go,” Jankowski hoped. “Hopefully it’s back in the majors. We’ll have to see in three weeks how the bone heals and how it goes from there.”

Edwin Diaz has done a lot for the Mets this season.

Has thrown about 20.2 innings – the most of any Mets reliever other than Smith – and dismissed 38 hitters. He made 11 saves, one of which sealed the team’s combined no-hitter, and posted a 2.61 ERA. One thing he has yet to do this season is a record of more than three outs in one appearance.

“There are about 20 reasons [for that]Showalter said. “You look at different things: rest, time of year, where they are in the batting order, who else do you have available, what are their options, is there bad weather coming up. A lot. Everything is going on.”

The last time Diaz went more than an innings was on August 19, 2021, when he played the ninth and tenth innings of a win over the Giants.