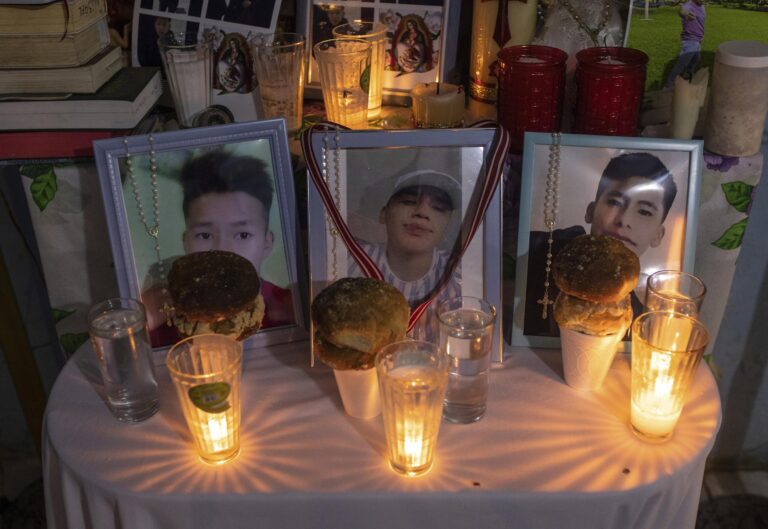 SAN MARCOS ATEXQUILAPAN, Mexico ( Associated Press) – After days of preparations and collection of donations for funerals, San Marcos Atexquilapan, a mountainous community in eastern Mexico, began a vigil Thursday morning for three of its boys, who suffocated to death. death in a trailer bed in San Antonio, Texas, two weeks ago, along with 50 other migrants.

Since Wednesday morning, the city has been an uproar with people preparing to say goodbye to brothers Jaír and Yovani Valencia Olivares, 19 and 16 years old, and their cousin Misael Olivares, also 16.

The women cleaned banana leaves for the tamales, others cooked and the men carried chairs from one house to another while the younger ones, friends and cousins ​​of the victims, prepared a mural with their pictures decorated with flowers.

Similar scenes were repeated in other parts of Mexico, where the bodies of eight of the victims of the worst event linked to the smuggling of migrants that took place in US territory arrived on Wednesday afternoon.

A second flight by the Mexican armed forces from San Antonio is expected to arrive in the country in the early hours of Thursday with the remains of eight more victims. The Ministry of Foreign Affairs said in a statement that throughout the day there would be other flights to repatriate 25 of the 26 Mexicans who died in Texas at the request of their families.

In the tragedy, 21 Guatemalans and 6 Hondurans also lost their lives, whose transfer to their countries is also expected to take place soon.

Several were teenagers, like the Olivares cousins, who will be buried on Friday. His farewell brought together hundreds of people from that area of ​​the mountains of Veracruz because the young people played in a local football team and were very well known.

“I can’t accept it,” whispered Yolanda Valencia, mother of the two brothers, as she waited for the coffins to arrive. The bodies would be received at dawn at the entrance of the city by relatives and friends and carried on their shoulders to the grandfather’s house, where the wake was held.

The woman, almost without strength, assured, however, that they had to “give their hearts” to life, “try to fight for the dreams they had to come true (…) How? I don’t know,” he said.

His children wanted to build a house and set up a shoe store in this town of around 1,500 inhabitants, usually covered in fog and where shoemaking is traditional. “They left with a lot of goals that they didn’t achieve,” the mother added.

The migrants were found on June 27 suffocated and dehydrated inside an unventilated trailer on the outskirts of San Antonio.

The truck was carrying a total of 73 people, humble men and women who paid thousands of dollars to traffickers to illegally enter the United States, where they aspired to a better life.

So far, US authorities have reported the arrest of four people: the driver, an American citizen and three other men. Prosecutors said two of the suspects, including the driver, face charges that could carry life in prison or the death penalty if convicted.