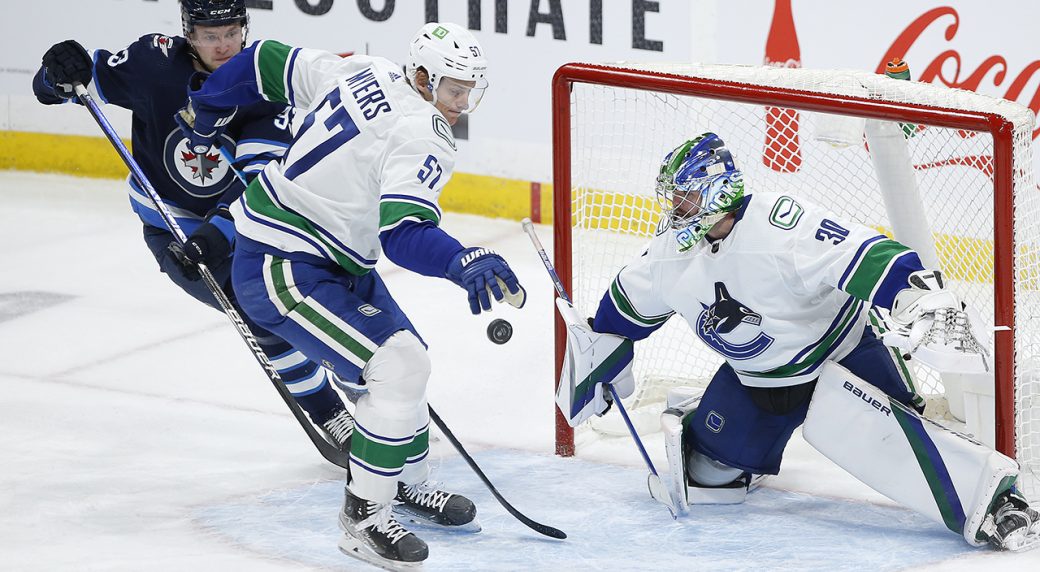 WINNIPEG — JT Miller registered his second career hat trick as the Vancouver Canucks snapped a three-game winless skid with a 5-1 victory over Winnipeg on Thursday, extending the Jets’ winless streak to a season-high six games.

Miller scored once on the power play and twice at even strength for the Canucks (19-19-5), giving him a team-leading 15 goals on the season. He also added an assist.

Brock Boeser had a goal and two assists and Elias Pettersson contributed a goal and assist for the Canucks, who were 0-1-2 coming into the game. Luke Schenn had two assists as the team opened a four-game road trip that continues Saturday in Calgary.

Spencer Martin made 33 saves for his first career victory in his third game with Vancouver, and sixth overall. He also played three games for Colorado.

The victory gave Vancouver a three-game sweep in its season series against Winnipeg.

Miller and Copp scored in the first period. Miller then added two more in the second for the 3-1 lead.

Vancouver capitalized quickly on the game’s first penalty. Miller sent a one-timer past Hellebuyck just 10 seconds into the man advantage at 13:23 for his 13th goal of the season.

Copp tied it two minutes later when he batted the puck into the net behind Martin for his 12th goal.

Miller made it 2-1 after he held the puck for a second, then sent a wrist shot low to Hellebuyck’s far side at 5:25 of the middle period.

Winnipeg had two power plays soon after Miller’s goal, but Martin withstood the pressure. Jets defenseman Nate Schmidt hit the crossbar and Copp hit the post in the period.

Miller notched his third goal at 12:55 am with a shot through Hellebuyck’s pads.

Boeser showed Vancouver’s power-play prowess when he scored seven seconds into his second man advantage off a rebound at 1:08. Pettersson fired in a high shot at 14:00.

The Jets, who were 0-for-3 on the power play, head out for a two-game road trip starting Saturday in St. Louis.

Notes — Jets forward Adam Lowry, son of interim coach Dave Lowry, played in his 500th NHL game … Winnipeg defenseman Johnny Kovacevic of Niagara Falls, Ont., made his NHL debut — the fourth Jet this season to reach that dream … Vancouver forward Conor Garland and goalies Jaroslav Halak and Thatcher Demko were removed from COVID-19 health and safety protocols earlier in the day. Garland was on the ice and Halak backed up Martin. Demko was meeting the team in Calgary.