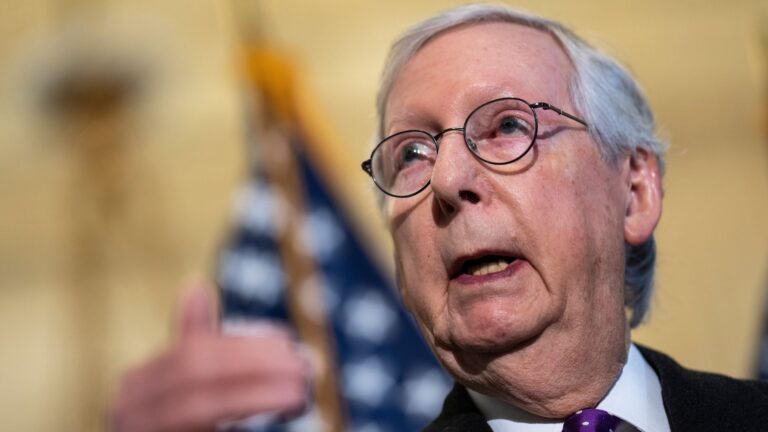 “The issue is whether or not the RNC should be sort of singling out members of our party who may have different views from the majority. That’s not the job of the RNC,” McConnell said at a weekly press conference.

“Traditionally the view of the national party committee is, we support all members of our party, regardless of their positions on some issues,” he added.

McConnell also told reporters that the Jan. 6, 2021, riot at the US Capitol was a “violent insurrection” meant to stop the peaceful transition of presidential power.

Members of the RNC voted Friday to formally censure Cheney and Kinzinger as punishment for sitting on the House select committee investigating the Jan. 6 attacks. The censure resolution is also characterized by the riot, which left at least seven people dead in connection with the violence, as “legitimate political discourse.”

Among Republican lawmakers, reactions to the resolution authored by their party committee have varied.

Sen. Lisa Murkowski (R-Alaska) said the censure was “absolutely wrong,” and Sen. Mitt Romney (R-Utah) said the suggestion “that a violent attack on the seat of democracy is a legitimate political discourse is so far from accurate as to shock and to make people wonder what we’re thinking.”

Both senators voted to convict former President Donald Trump for inciting the Capitol riot. Cheney and Kinzinger were also among the 10 House Republicans who voted to impeach Trump.

But other Republicans, particularly those in the House, sought to downplay the controversy as a distraction from their only goal this year: retaking the majority.

“The RNC has every right to take any action… The position that I have is that you’re ultimately held accountable to the voters in your district,” House GOP Conference Chair Elise Stefanik (RN.Y.) told reporters on Tuesday .

House Minority Leader Kevin McCarthy (R-Calif.), meanwhile, claimed that the RNC did not intend the clear meaning of its own resolution. “Everybody knows” the rioters who caused damage “should be in jail,” he told reporters on Tuesday.