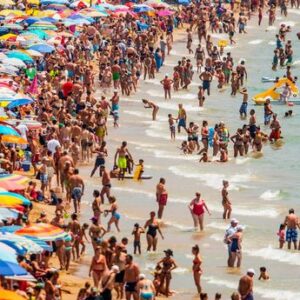 Brits should be alert for symptoms of monkeypox as Belgium becomes the first nation to introduce restrictions.

Cases are spreading across Europe and Belgium, which has recorded three cases, has introduced a mandatory 21-day quarantine for anyone suffering from the virus.

Outbreaks have been reported in Spain, Portugal and central Africa and on Friday Spain reported 23 cases some of which were linked to a sauna in Madrid.

An island festival in Spain attended by 80,000 people is believed to be the source of cases in Spain and Italy.

The UK Health Security Agency (UKHSA) has confirmed 20 cases of the disease in the UK with nine other countries outside of Central and West Africa also reporting outbreaks.

More cases of the disease are being reported every day in the UK, according to Dr Susan Hopkins, a chief medical adviser for UKHSA.

Dr Hopkins said in an interview with the BBC that younger children were more at risk.

She said: “We do know from reports from Africa, where the disease has circulated in outbreaks over many years, certain individuals are much more at risk of severe disease, including immuno-suppressed individuals or young children.

If you have a rash you should immediately seek medical care
,

“In adults, it is relatively mild.”

The disease, which was first found in monkeys, can be transmitted from person to person through close physical contact – including sexual intercourse – and is caused by the monkeypox virus.

Read Also:  What you need to know about mixing and matching COVID vaccines, getting boosters

Medics are still learning about the illness as it is a new disease which has not been circulating in the community.

She told the BBC: “Clearly, this is a new infectious disease that we haven’t seen in our community before.

“We will need to learn a lot about it over the coming weeks.”

Monkeypox outbreak is ‘biggest ever in Europe’ and an ‘epidemic’, says expert

There were 20 cases of monkeypox on Friday and Dr Hopkins said updated figures for the weekend will be released on Monday as she warned of more cases “on a daily basis”.

She was asked about the risk to those going to summer festivals and kids on holidays abroad.

She told the BBC’s Sunday Morning programme: “We are detecting more cases on a daily basis.

“We know there’s been a period of restrictions across Europe and we don’t know where this infection has come from and how it’s come into Europe.

“There’s no obvious connection in our cases in the UK to a single event.”

More cases of the disease are being reported every day in the UK, according to Dr Susan Hopkins, a chief medical adviser for UKHSA
,

Symptoms include a viral illness, before a rash like chickenpox spreads across the body.

Those who feel they have any of these must “stay at home,” Dr Hopkins said.

“If you have a rash, immediately seek medical care, either by calling your GP or a sexual health clinic,” she said.

It’s believed Covid lockdowns across the world may have fueled the spread of the virus.

“We know there’s been a period of restrictions across Europe, and we don’t know where infection has come from,” she said.

“There is no obvious connection to a single event in our cases in the UK.”

Asked if people will need to get vaccinated for the infection, she told BBC One’s Sunday Morning: “There is no direct vaccine for monkeypox but we are using a form of smallpox vaccine – a third-generation smallpox vaccine that’s safe in individuals who are contacts of cases.

“So, we’re not using it in the general population.

“For contacts, [this] reduces your risk of developing disease, so that’s how we’re focusing our vaccination efforts at this point.”

With biomarkers they seek to prolong life in lung cancer

they bark then we ride