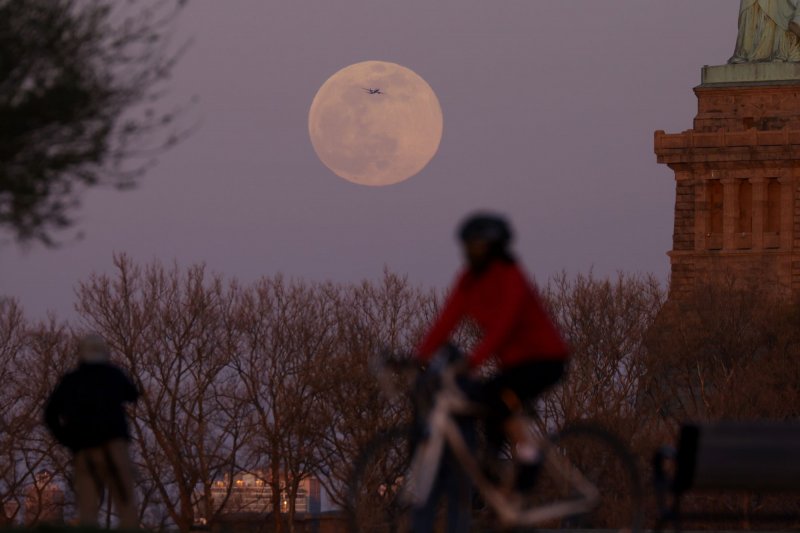 A pink supermoon rises behind the Statue of Liberty in April 2021 from Liberty State Park in Hoboken, New Jersey. Jupiter, Venus, Mars and Saturn are lined up in the sky this month, and by the end of April the Moon will join them, astronomers say. File photo by John Angelillo/UPI | license photo

Early risers who wake up before the crack of dawn will be rewarded with spectacular views of the planets by the end of the month, and early next week the daily spectacle will be even more impressive.

Jupiter, Venus, Mars and Saturn line up in the early morning sky and will continue to shine in a row through the rest of April. The quartet is easily visible without binoculars in the eastern sky, and another celestial object will join the alignment early next week.

The Moon will be visible near the four planets about an hour before sunrise on Monday, April 25 and Tuesday, April 26.

The two-day event means people can check the AccuWeather forecast to see which morning viewing conditions will be better before they wake up early to enjoy the sights in the eastern sky.

A fifth planet will be hidden in plain sight near the bottom of the alignment, going unnoticed except for a little help.

Neptune will be visible near Venus and Jupiter on April 25 and 26, however, it will be difficult to see because the planet is too dim to be seen without the help of binoculars.

Those new to using the telescope will find some help in spotting distant worlds as it will be directly visible between Jupiter and Venus. Neptune will look like a small blue dot before sunrise, distinguishing it from other planets and stars visible in this region of the sky.

The early morning planets on April 30 and May 1 will be visible again as Jupiter and Venus pass extremely close to each other.

Astronomers refer to this type of planetary union as a conjunction, and it will be the closest Jupiter and Venus will be visible in the night sky from November 24, 2019.

Skywatchers should also keep an eye on the shooting stars as the annual Lyrid meteor shower will be active until April 29.

Hourly rates will not be as impressive as those expected to be 15 to 20 hourly on the night of Thursday, April 21, but some meteors are still possible early in the morning when planetary alignment is visible.

The International Space Station is pictured during the Orbiting Lab’s flyaround from the SpaceX Crew Dragon Endeavour, following the Harmony module’s undocking from the space-facing port on Nov. Photo courtesy of NASA

Chicago Bulls are eager for a rematch with Grayson Allen after Alex Caruso’s injury: ‘If guys want to play chippy, let’s play chippy’