Morrison ‘not contemplating’ quitting if he loses election, claims he can defy polls again 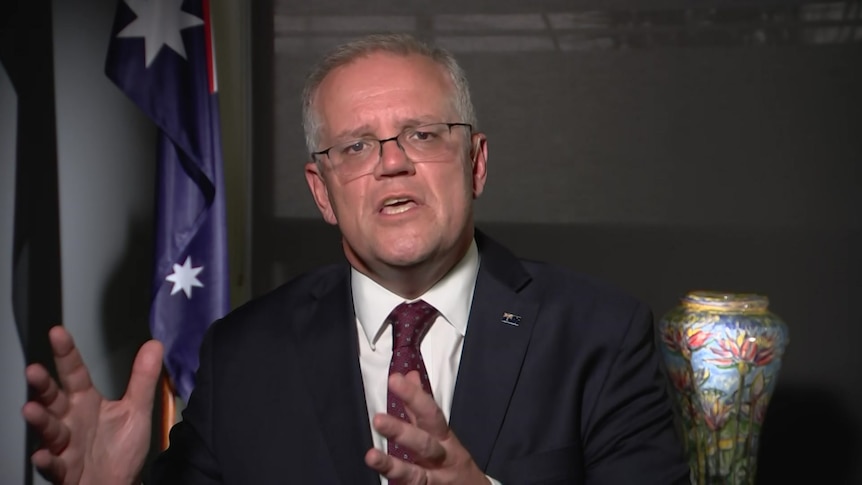 Prime Minister Scott Morrison claims he can defy national opinion polls and win Saturday’s federal election, saying Australians want him to be a “more inclusive” Prime Minister if he gets another term in power.

Despite the upbeat message, some of his Liberal colleagues are increasingly worried the national polls are suggesting a Labor landslide is the most likely outcome this weekend.

The opposition believes it is competitive or in front in a swathe of seats. It needs to win just seven to claim a majority, while the government can’t afford to lose any.

But in a wide-ranging interview with 7.30 about his prospects and time in office, the Prime Minister declared he wasn’t thinking about standing down after Saturday’s poll, even in the event of a defeat or a hung parliament.

Josh Frydenberg, or possibly Peter Dutton, are considered the most likely next Liberal leaders should the Coalition lose, though that would be dependent on both mening their seats and the final numbers retain in the party room.

Some independent candidates, like Zali Steggall, have already indicated they would be unlikely to support the Coalition in the event of a hung parliament, if Mr Morrison remains leader.

The Prime Minister said he would accept the outcome of the election because he trusts the choices Australians make at the ballot box but would not “speculate” on what could happen on Saturday.

“I’m focused on one thing and that’s ensuring our government continues,” he added.

“The only person who has announced their retirement is you, Leigh, and I wish you very well in your retirement.”

In another concession that his personal popularity is a drag on the government’s vote in some key seats, the Prime Minister again suggested he would change if given a second chance.

“People really just want to see me be more inclusive in terms of how I go forward,” he said, rejecting claims voters were angry with him because he had not taken responsibility for some of the government’s failures.

But he did suggest he may have alienated some voters by “acting decisively” during the pandemic.

“During the course of a crisis and a pandemic, you’ve got to move fast, you’ve got to be decisive and that means sometimes you can’t take everybody with you and you don’t always get everything right either,” Mr Morrison said.

“But in the next phase, then we’ve got the opportunity to bring people forward on that plan.

“I’ll tell you one thing, the only way Australians are going to be able to get access to their superannuation to buy their own home is if they vote Liberal and National, because the Labor Party will never do it.”

Liberals concede the Prime Minister and his Deputy, the Nationals Leader Barnaby Joyce, are unpopular in some inner-city seats in Sydney and Melbourne that are being targeted by independents backed by the Climate 200 group.

As a result, Mr Morrison’s campaign has mostly targeted seats in suburban and regional areas in a bid to take electorates off Labor.

“Many of these places, [inner city seats] I suppose, are less vulnerable to the impacts of the economy than, say, many of the places I’ve been in this campaign,” he said, when asked why some traditionally Liberal heartland seats are under threat.

Labor strategy has ‘gone to plan’

Senior members of the Labor opposition remain deeply scarred after losing the 2019 election and some refuse to believe the situation is as rosy as the polls make out.

That said, a number believe the party has successfully stuck to its strategy over the past three years.

“I know people will pick over this next week when it’s all done and dusted, but from my point of view, it’s gone to plan,” Shadow Finance Minister Katy Gallagher said.

However, in a sign of how nervous the Labor Party remains about this campaign, she immediately added, “touch wood”.