Mysteries, tyrannical doubts and clues erased: the drama of Cecilia Giubillio, the doctor who disappeared forever 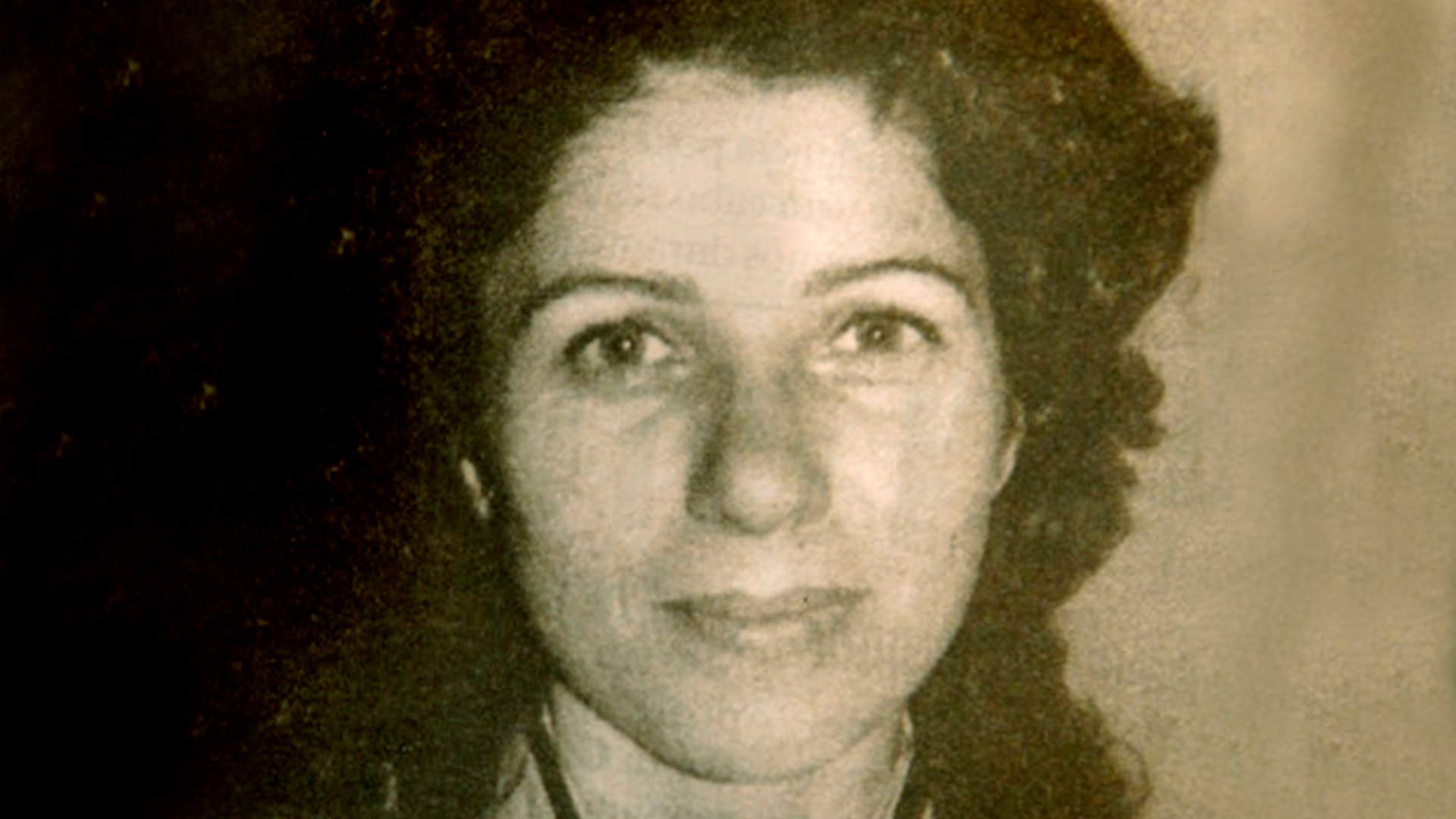 It may be the plot of a series of suspense and terror: a woman wiped off the map, a dark place, silent or paranoid witnesses, terrified policemen, perplexed bystanders and the shadow of a dark force that permeates the sinister plot. .

But the missing doctor Cecilia Giublio, which happened on June 16, 1985, was real. It is one of the biggest puzzles in the history of Argentine crime. when he was last seen The doctor was on duty at Colonia Montes d’Oca. The investigation could never reach the mobile: Was he a victim of some woman-murder? Was he killed in a mental break by a mental patient? Did they kill her because she was about to slander their masters?

The nervousness of the investigation became clear when the parapsychologist was summoned. Eleanor Hernandez To help with the search. The woman fainted and said that there are human remains in the pond. Everyone was surprised to see this was true, but corpse was of a patient,

Nothing was ever heard of Giublio.

It was suspected that he was murdered because He had found that organs had been smuggled into that psychiatric hospital. One day a recording appeared in which a woman asked that they stop looking for him, that he was calm. but it was about An actress who posed as Giublio. 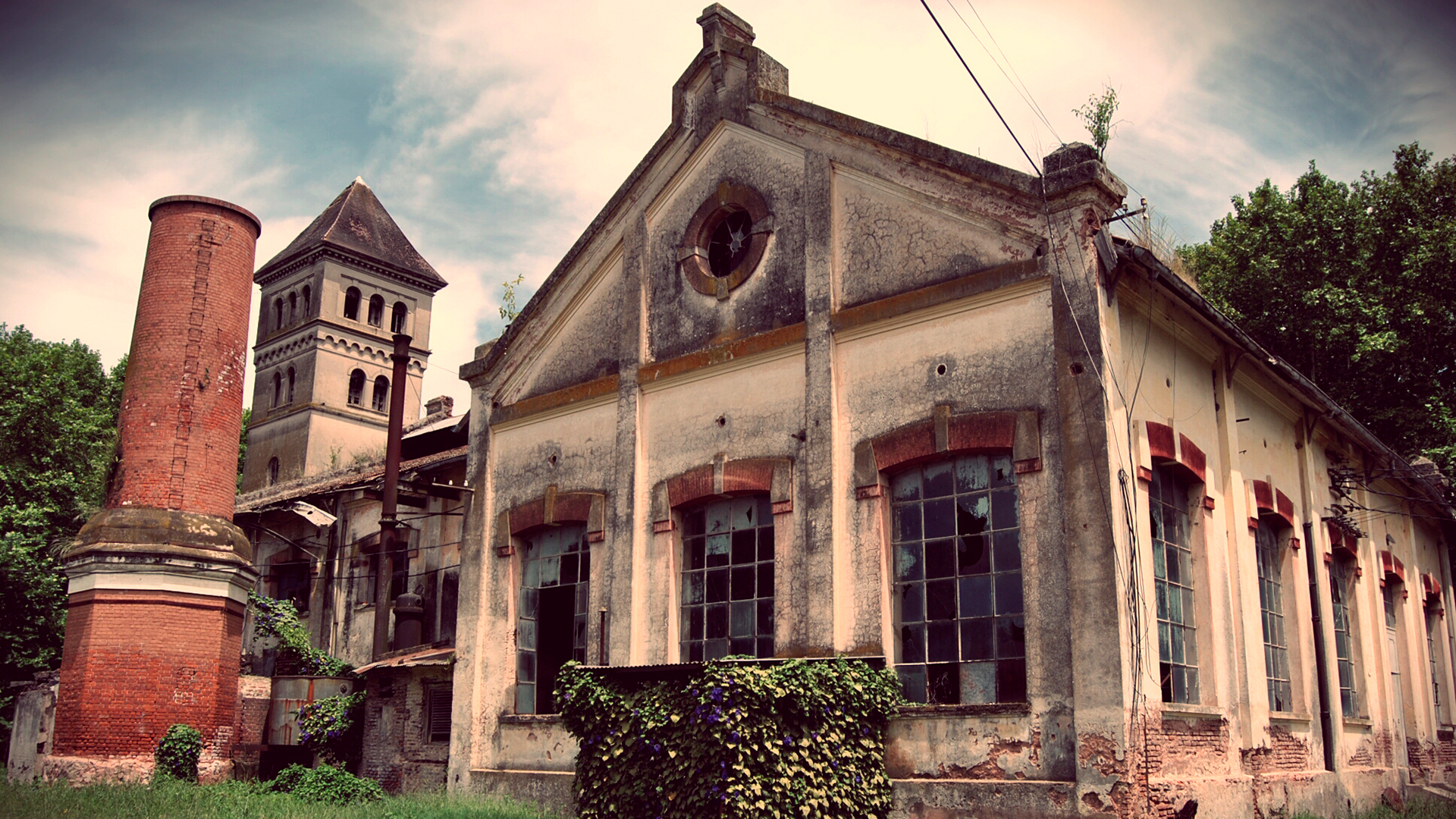 There was an insurmountable obstacle in the case: the only witnesses who could contribute anything were insane. journalist Henry SadrechOld Hound and case expert, reflected: “After the mysterious disappearance, there was not only a sense of fear and insecurity among the population, but also a sense of mistrust in the justice system and the police.”

Giublio was born in Lincoln in 1945. He studied medicine in Cordoba, where he met Paul Chabroli, They were married in 1972. In the last military dictatorship, Giublio’s political family was persecuted. Her two brothers-in-law were active in ERP and were missing And a gang kidnapped her father-in-law. The couple had to go into exile in Greece and Spain. But after a few months they separated and Giubileo returned to Argentina, where he obtained his medical degree after studying and passing exams in two subjects. In 1974 he started working at the Hospital Interzonal Colonia Dr. Domingo Cabred, and He settled in Lujan, 80 km from Buenos Aires. He rented a house on Humberto I Street and an office in Torres.

Before she disappeared from the Colonia open door, the only traces left by the doctor were her white Renault 6 standing on the hospital grounds and a pair of shoes in the bedroom where she slept. She was wearing a blue jogger with light shades, a light blue jacket and white sneakers. She was never seen again.

an article from Eduardo Anguita You Daniel Cecchinipublished in infobaesaid that three people had seen Giublio before his disappearance. “Miguel ‘El Loco’ Cano, one of the apprentices in the neighborhood, accompanied her the 500 meters that separate Pavilion 7 – where she went to treat another patient – from the medical house. On the way they First a nurse and then a supervisor met Nelida Onjuez “, describes the note. The nurse asked him if there was anything new and he replied that in Pavilion 7 he had treated a patient with urticaria. The supervisor reprimanded her for not informing her that she was going to attend a pavilion. “Don’t cut yourself, this time I’m not going to warn you,” warned the woman. Giublio told him that he did not agree because he could not look everywhere before seeing a patient who needed immediate treatment. Arriving at the building to rest, he said goodbye to Cano, who was still with him. He asked to be quiet that I was going to sleep for a while.

that day, The doctor had certified her entry into the guard at 9:38 pm. And since then he had signed the death certificate of a 23-year-old patient, treated for a febrile condition and the patient had hives. The next day, Monday, at 8:15 a.m. an employee knocked on the door of Giublio’s bedroom, but there was no response. He insisted. And then the same. When he entered he saw a bed and a pair of brown shoes. There was no other stuff.

The first question that arose was why a doctor who should have been on duty had left hours ago without giving any notice. Another surprising detail: the colony was cut off from the outside world because Telephone switch was not working. 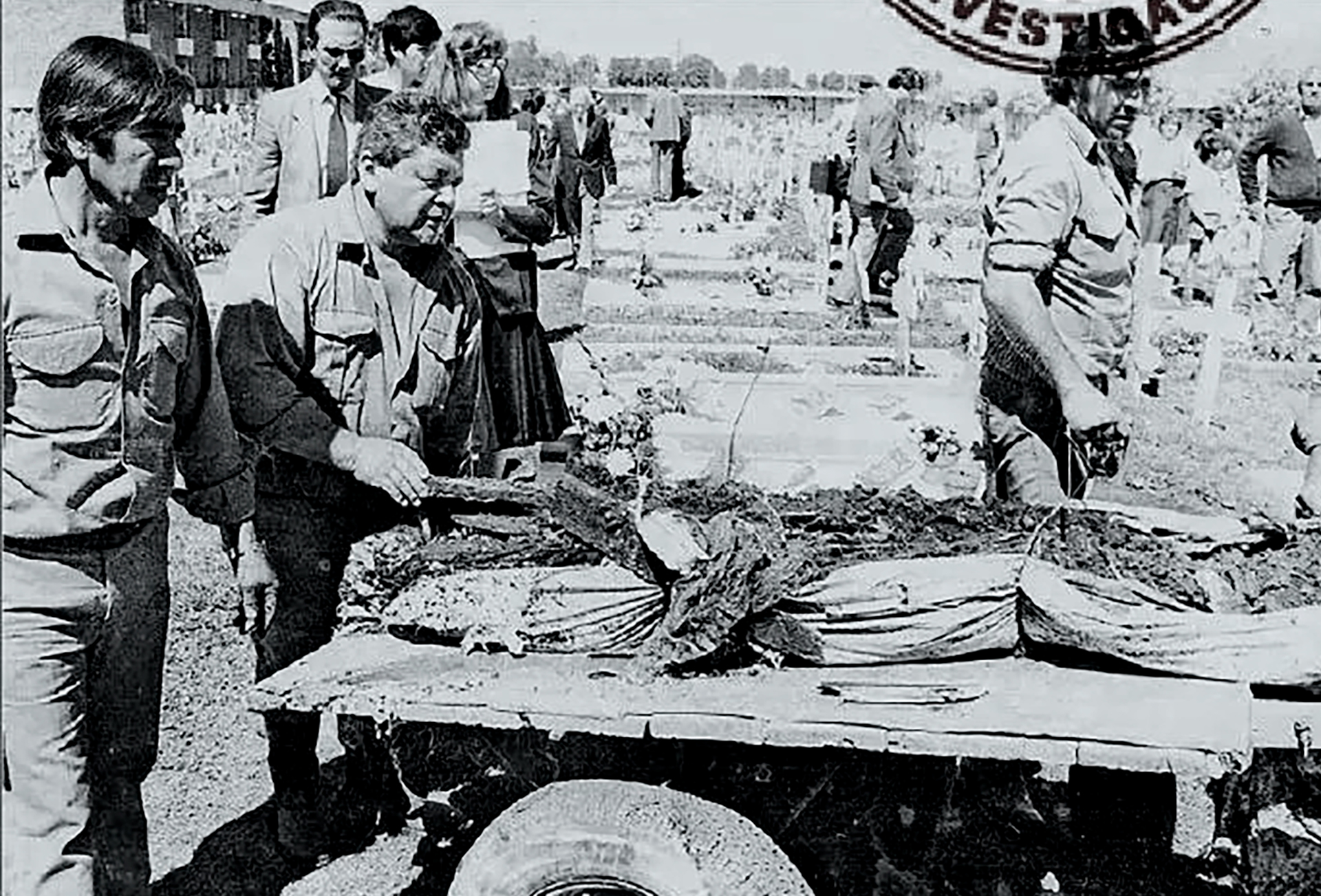 A carcass was found in a pond in Colonia Montes d’Oca, when the seer Leonor Hernández indicated its presence. But it was not from Giublio, but from a patient

In the next hours, two scandalous incidents happened. Instead of filing a mysterious disappearance complaint, Florencio Sanchezhospital director, Ordered an internal summary against the doctor for “leaving work”. The second incident was the remodeling where Giublio was supposed to sleep. Sanchez and . Masons used to work by order of When forensics arrived, they could not find evidence as it looked like another room. Not only that: Judge Carlos GallasoThe first investigator had not ordered the sealing of the area, nor had he ordered any measures to be taken to preserve the evidence.

The complaint was made on June 19 by a friend of Giublio Beatriz EhlingerColony employees. But the necessary 48 hours were lost in every police case.

One of the witnesses was “El Loco” Cano. He said that the doctor had told him that he was going to rest and that he A few minutes later he saw two black cars entering the area where Giublio was going.

No one said that they saw him leaving from that place.

All the time there was talk of her ex as a suspect, that she was kidnapped because she knew about the experiments being conducted at the asylum, or that she was going to condemn organ trafficking. her ex-boyfriend, francisco merinoAbout the last time I spoke to her, five days before she went missing: “She told me that in the neighborhood they began to persecute her because she wanted to condemn some irregularities. They gave it to me to explain that the corneas of the patients were removed and then put to death in a skillet. also talked about. She was very scared. We have come from dictatorship and I told her not to get into trouble, that we live in peace because there are organizations that are very difficult to mess with and whoever messes up , they kill him”,

But that line of inquiry did not succeed.

Too It is said that a patient killed him and buried him. And that he was kidnapped by a smuggling network. But all those doubts did not yield any result. 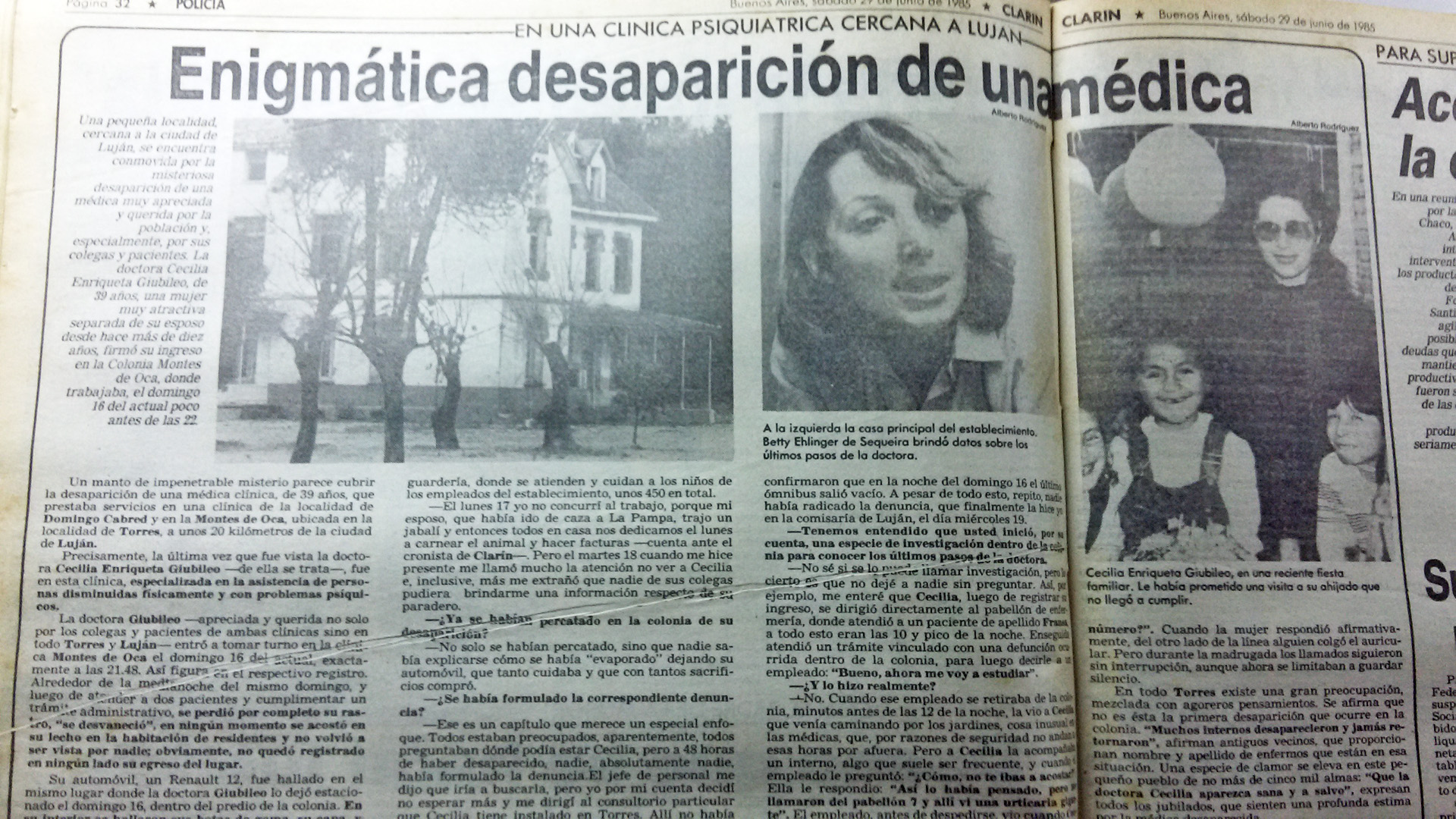 The matter had created a national uproar.

“At present, the most important questions in the case remain unanswered and no one is interested in solving them,” he says. Mattias Cambiaggi, sociologist and author, author of the book “Picture of Oblivion”. In search of Cecilia Giublio, the first in a democracy to disappear”.

In his thesis, the author reveals a trove of information: “Cecilia Giubillio is not even interested, which is the most disappointing thing of all. The Colonia Montes d’Oca does not even have a commemorative badge to this day, perhaps because To many of the workers, Giublio is a dirty word and when you ask them they tell you that she didn’t die and that she is in Europe, as they used to say about the disappearance.

The seer Leonor Hernandez never forgot his experience in the investigation. It was rare at that time to participate in a police investigation for a dowry. Over the years, it became a legal and corporate activity in the United States. There was even a series, Medium, which dealt with so-called psychic detectives. Hernandez cooperated with the police when Giublio’s mother authorized it. As he remembers his role in that case, his body posture becomes tense, he closes his eyes and speaks in the present tense, as if those scenes had returned to his mind.

– It’s night. I see the girl enter a house. I can see white colored walls. I saw a man climbing a ladder. 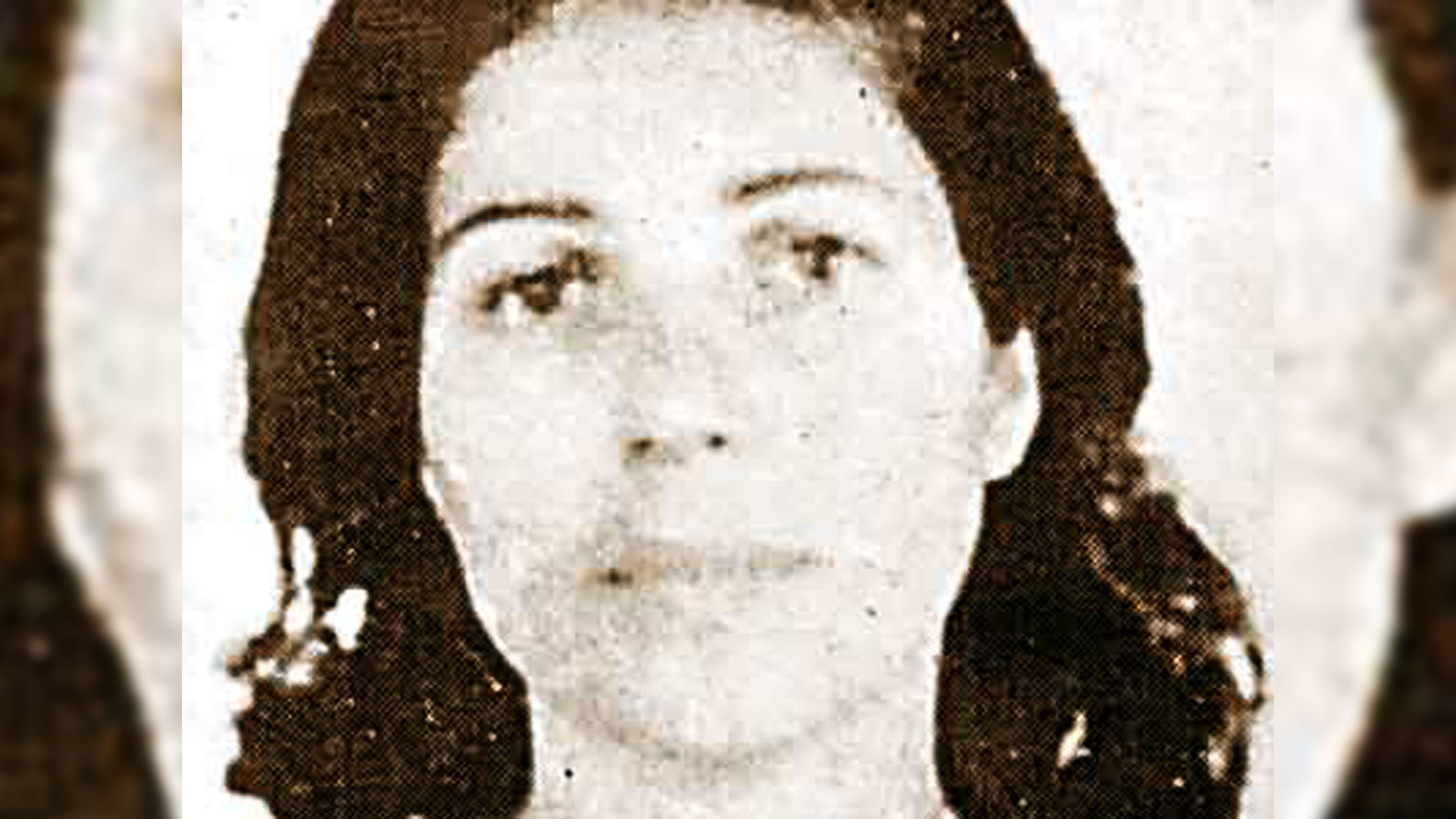 After that Darshan he went to the venue with the journalist jose de zeroThen the Channel 9 star and his cameraman Chango.

-I verified that the house was Montes d’Oca. The walls were ocher, although upon scraping them with a knife we ​​found them to be white and painted after they had disappeared. In another mausoleum I see a woman in a nightgown, a man in a white suit and a young man in overalls. When I woke up I almost fainted. He told me that I was crying. When I concentrate, my head goes blank; It’s like I wasn’t there because I completely abstract myself. De Zar’s sweetheart was so kind that she didn’t film me in that state; He was a gentleman.

before leaving, The seer predicted: “Giublio will never appear again.”

It was a hit. After some time, the investigators, their relatives, the witnesses, even the section of society that followed the case as if it were a horror novel came to the same conclusion.

If she were alive, Cecilia Enriqueta Giublio would be 76 years old today.

Macabre Clues and Removed Evidence: The Mystery of Cecilia Giubillio, the Doctor Who Disappears in a Psychiatric Colony
Fatal Attraction to Robaldo Puch and His Best Friend: Forbidden Love, Ill Jealousy, and a Crime