Naperville North graduate James O’Shaughnessy said of joining the Chicago Bears: ‘It’s a sentence you write in a children’s book.’ 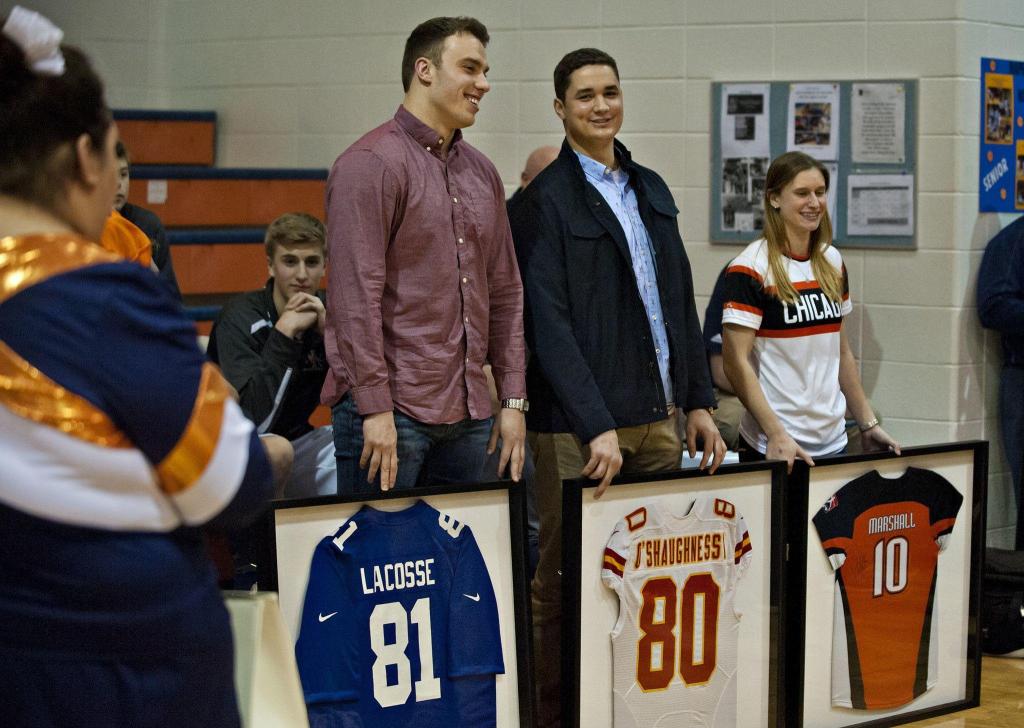 It takes about an hour to drive from Naperville North to the Chicago Bears’ practice facility in Lake Forest, depending on traffic and time of day.

But when James O’Shaughnessy was growing up and playing football at Friday Night Lights for the Huskies, that trek seemed miles away.

“In high school, I had an aspiration to play in the NFL,” O’Shaughnessy said. “But I never thought it was a realistic opportunity.”

O’Shaughnessy made his formal debut with beer at OTA on Monday, and he’s officially back home.

The metaphorical leap hasn’t been lost on the 6-foot-4, 245-pound tight end, who was a fifth-round draft choice by the Kansas City Chiefs in 2015.

O’Shaughnessy, who signed a one-year deal with the Bears as a free agent, has played 57 games with the Chiefs and Jacksonville Jaguars in seven NFL seasons, including 34 starts.

“I’ve been fortunate enough to play in this league for a while,” said O’Shaughnessy, who has taken 112 catches for 1,108 yards and three touchdowns in his career. To have the opportunity to come home is the definition of a dream.

“It’s a sentence you write in a children’s book.”

Ryan Boles, the Bears’ new general manager, was Kansas City’s college scouting director when O’Shaughnessy was drafted by the team.

Marmion graduate Brad Childress was a member of Andy Reid’s coaching staff during O’Shaughnessy’s two seasons playing for the Chiefs.

O’Shaughnessy attended Marmion for his first two years of high school before relocating to Naperville North, where he graduated in 2010.

“I had another visit before my meeting with Bear,” he said. “My hometown team showed interest, as soon as I heard this, my agent jumped at the opportunity to see if we could do something.”

His return home shows a remarkable story of perseverance and resilience after O’Shaughnessy received a scholarship offer from Illinois State just as a senior.

“He was really competitive from the get-go,” said retired Naperville North basketball coach Mark Lindow. “I wish he could have played college basketball.

“The fact that he remains in the league doesn’t surprise me because of his work ethic. He was always a goal-oriented person. ,

The O’Shaughnessy arrived at Naperville North in the fall of 2008, the year the Huskies won the Class 8A state championship.

At the time, Sean Drendael was the defensive coordinator under longtime coach Larry McCann. Drendell took over when McCon retired.

“There was a great group of coaches throughout the program in the North during that time,” O’Shaughnessy said. “There was a tradition of how the game should be played and the standards at which they expected us to play.

“When I moved to Illinois State, I realized some of the things they taught were being a truly selfless player and doing whatever it takes to ensure your team wins.”

The triple-option offense McCon played in Naperville North also proved to be a role model in O’Shaughnessy’s growth and development.

“At Illinois State, when I transitioned to the tight end, being asked to block was not something foreign to me or something I was unwilling to do,” he said.

Position wise, he was in the right place at the right time as the NFL began to accelerate its evolution from a run-oriented game to wide-open passing.

“I was really lucky when I did to get into the league,” O’Shaughnessy said. “My first team in particular is Kansas City, a team that used such tight ends.

“I got to see how the situation has developed. Overall, the entire league is now looking to exploit matchups and versatility in the offense. I got lucky in that fashion. ,

Playing in a league where the average career span is just 3.3 years, O’Shaughnessy has proven to be durable and effective. Now 30, she is also a newlywed.

His wife, Ava, is the sister of Green Bay Packers defensive end Dean Lowry, who played at the Rockford Boylans and Northwestern.

Living with Bear is a blessing, and O’Shaughnessy is ready to take advantage.

“I’ve had the opportunity to play a wide tight end, a blocked tight end, a passing end,” he said. “I was a special-team player with double-figure tackles.

“My greatest strength is my ability to do whatever is asked of me to the best of my ability.”

Patrick Jade McGavin is a freelance reporter for the Naperville Sun.

At the music festival, ‘Rapper Drakeo the Ruler’ dies at 28 after stabbing