NASA and its new plan to go to Mars: the ship crashed into the planet Movies, books and videos have taught us that for a spacecraft to land on any surface, it must descend slowly. But interestingly, the new plan of the National Aeronautics and Space Administration (NASA, for its abbreviation in English) going to mars is the opposite,

According to a report published on the US space agency 20 Minutes websiteworking on a new landing system called e shieldwhich can replace the one you currently use.

According to the researchers, the system will make it possible to land in places where it was not possible earlier and will also reduce the current cost of space missions. NASA used various methods to land on the surface of Mars, such as parachutes, thrusters, giant airbags, aerial cranes, etc. But SHIELD will outlast them all.

How will the shield be?

SHIELD will be used in the Mars Sample Retrieval (MSR) mission in which NASA will use the Sample Retrieval Lander (SRL) spacecraft to land on the Red Planet, collect samples from the Perseverance rover and launch them into space. Those samples will be picked up by the Earth Return Orbiter (ERO) probe, which will return them to Earth.

The innovative landing system has a circular base and a pyramidal shape, as shown in the picture above, and folds by absorbing the energy generated when it hits the ground.

Lou Giersch, project manager for SHIELD, explained: “We think we can move into more complex areaswhere we wouldn’t want to risk landing a billion dollar rover with our current landing system,

The SHIELD team tested their invention with a test that involved a launching system similar to a slingshot, a method that mimics the method used to test cars’ resistance to collisions. After testing, engineers verified that all equipment had not been damaged.

,The only hardware that was damaged were some plastic components which we were not concerned about. Overall, this test was a success”Giersch explained. 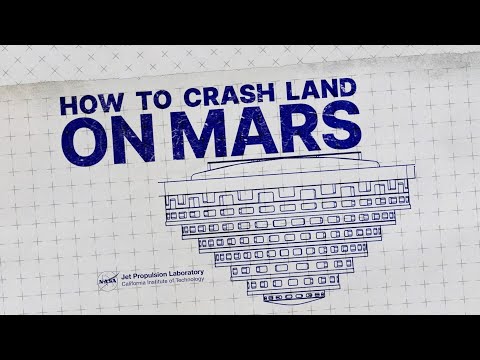