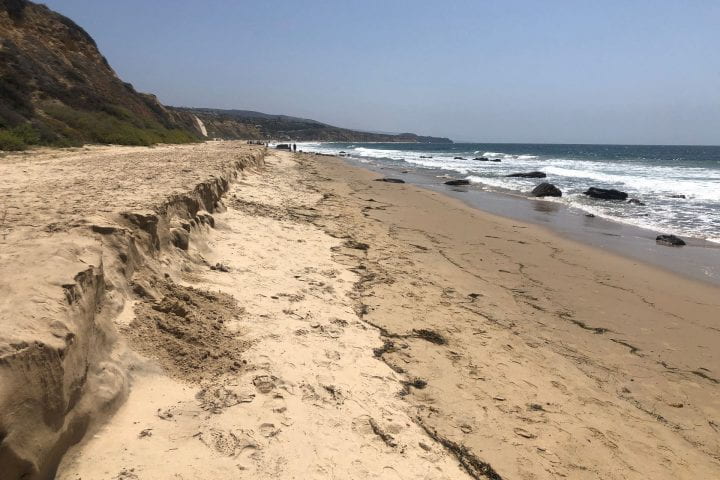 Sanders noted that it is challenging to acquire data on fluctuations in sand content along the coast on a large scale and with sufficient accuracy to understand site-specific processes and factors driving beach loss.

“Sea level rise is currently several millimeters per year, but coastline topography can change by more than a meter a month,” he said. “We would not have a good estimate of future flood risks along the wave-dominated coasts found in Southern California without better data monitoring changes in beach topography.”

Working with Pietro Millillo, UH assistant professor of civil and environmental engineering, Sanders will develop new observation strategies and techniques to measure sandy beaches and dunes. They will use technologies such as interferometric synthetic aperture radar and lidar, which involve targeting an object with laser light, to obtain precise size and distance information.

In an early phase of the project, the team will combine data provided by the German Aerospace Center’s Tandem-X and NASA’s ICESat-2 satellites with surface elevation models and lidar observations at four beach/dune sites in Southern California. Researchers will make measurements on a monthly and in some cases, submonthly basis for three years.

“Our first goal is to document surface elevation changes in very high resolution and verify whether our satellite-based approach can match the accuracy we can achieve with proven ground-based and aerial sensors. are,” said Millillo, who was previously an associate project scientist. in UCI’s Department of Earth System Science. “If this proves successful, we will deploy each month to document surface elevation along all coasts with better coverage and at a lower cost to coastal communities than ever before.”

This work may lead to a better understanding of sand movement; identification of hot spots of sand scarcity; and early detection of beach thinning, which can help trigger adaptation efforts.

The NASA-funded project will also include modeling of coastal flood risks based on observed changes in beach topography, along with data characterizing changes in coastal waves, tides and sea level.

“We know future flood risks are increasing, but uncertainty in coastal topography makes it difficult to say how much and when. This work will increase our confidence in flood risk estimates for the next several decades,” Sanders said. .

About UCI’s Brilliant Future campaign: Publicly launched on October 4, 2019, the Brilliant Future campaign aims to raise awareness and support for UCI. By engaging 75,000 alumni and raising $2 billion in philanthropic investments, UCI strives to reach new heights of excellence in student success, health and wellness, research and more. The Henry Samueli School of Engineering plays an important role in the success of the campaign. Learn more by visiting https://brilliantfuture.uci.edu/the-henry-samueli-school-of-engineering.

About University of California, Irvine: Founded in 1965, UCI is the youngest member of the prestigious Association of American Universities and is ranked among the top 10 public universities in the country. US news and world report, The campus has produced five Nobel Prize winners and is known for its academic achievement, major research, innovation and anteater mascot. Led by Chancellor Howard Gilman, UCI has more than 36,000 students and offers 224 degree programs. It is located in one of the world’s safest and most economically vibrant communities and is Orange County’s second largest employer, contributing $7 billion annually to the local economy and $8 billion statewide. For more information about UCI, visit www.uci.edu,

Media reach: Radio programs/stations may, for a fee, use the on-campus ISDN line to interview UCI faculty and experts, subject to availability and approval of the University. For more UCI news, visit news.uci.edu. Additional resources for journalists can be found at communication.uci.edu/for-journaists.

CM Yogi Clement on those who made minor mistakes in lockdown: more than 2.5 lakh cases will return