NASA is preparing to embark on a journey it hasn’t done in half a century. To get there, it would need the most advanced spacecraft ever built: the 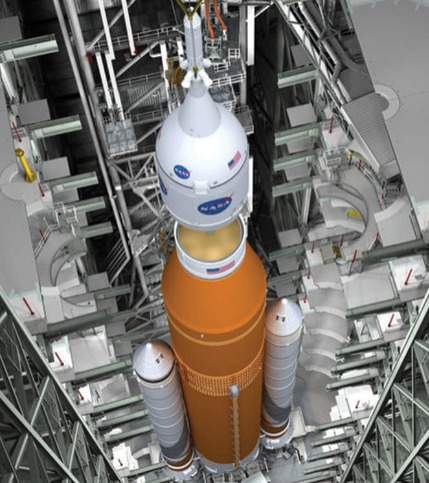 NASA is preparing to embark on a journey it hasn’t done in half a century. To get there, he’ll need the most advanced spacecraft yet: the Space Launch System, a super heavy-lift rocket, and the Orion crew ship.

These remarkable bits of machinery combine to create Artemis, a historic space shuttle, and a massive space program that will send the first woman and person of color to the Moon and push humanity deeper into space than ever before.

NASA has scheduled three Artemis flights in the program’s early years, all of which will use the Space Launch System, the most powerful rocket the agency has ever built. The SLS will not be tested, and each SLS rocket will launch only once.

This massive spacecraft will shoot for the Moon on its first launch this year, potentially as early as August, without a crew. On its second flight, SLS’s payload, the Orion capsule, will shepherd humans around the Moon before re-entering Earth’s atmosphere and hitting speeds of 24,500 mph and temperatures of 5,000 °F. In the third flight, beginning in 2025, Orion will land four Artemis crew members on the Moon, which is 1,000 times farther from Earth than the International Space Station. This will be the first time since 1972 that humans have set foot there.

The Artemis build is a massive project, and it’s taking place at the same site where NASA worked on the space shuttle and hardware spanning the Saturn and Apollo programs: the Michoud Assembly Facility in New Orleans.

Read Also:  Imagine looking at the Milky Way in 2000 infrared colors. James Webb Telescope is going to do this

According to a recent audit, it’s an ambitious target with a price to match: $93 billion from 2012. But in 2022, a decade after those costs began to count, the first rocket is preparing to launch. And the world will finally get to see what the next generation of Moon rockets are really capable of.

This is what they call “America’s Rocket Factory”. And here, NASA, Boeing and Lockheed Martin are building hardware that will take us on a truly historic journey.

Like any factory, it is a hive of activity, with multiple rockets swirling their way through the facility on any given day. Yet the people here know the importance of a project like Artemis.

“We don’t make washing machines,” says Tim Livingston, Lockheed Martin’s integrated planning manager for Orion in Michoud. “We build the national treasure.” an epic creation
Imagine a car production line. But instead of adding doors and body panels, you’re building a 322-foot-tall rocket that’s bigger than the Statue of Liberty. A project of that size requires a unique factory and 2 million square feet of room.

“What you need is a large open space,” says Lonnie Dutrex, director of the Michoud Assembly Facility. “You have to have wide open aisles, you have to have spaces with cranes to be able to lift heavy rockets. And loading floors — people don’t realize there’s no base in South Louisiana… So the floor here has to be strengthened to support the weight. Deutrex is talking to me in the Michoud Model Room, walking around a scale model of the entire Michoud Assembly Facility and showing me how to rocket through the facility They have a smooth approach and a strong Louisiana draw—aside from the buttoned-up demeanor that I expected from the engineer overseeing the largest construction at Michoud before building the Saturn V’s first stage for the Apollo program (Artemis I is a fraction smaller than the Saturn V used for the Apollo program, but it can lift 1.3 million pounds more payload into space. A future configuration of Artemis, on which Michaud has already begun work and which is designed for deep space missions, will be longer than Saturn).

Dutrex has been in the space industry for decades. He helped build and test parts for the spacecraft program in the 1990s. But there is no complacency that comes with that experience. For Deutrex, every part of this build is mission critical.