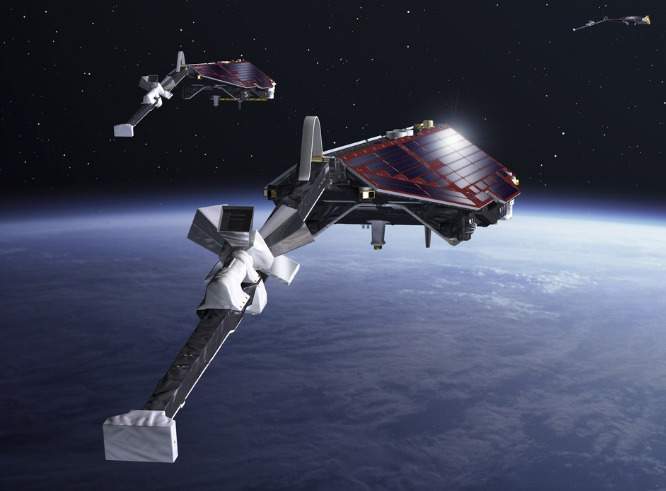 NASA is preparing to launch Starling, the world’s first satellite swarm. Instead of speaking individually with the four Starling CubeSats, mission operators would instruct the entire swarm.

According to Howard Cannon, NASA Starling project manager at NASA Ames Research Center, “the herd has the potential to change the way science is performed.” “Instead of relying on a single monolithic spacecraft to function effectively, you can have several smaller, less expensive spacecraft.”

Take, for example, Helioswarm, a $250 million mission that NASA plans to launch in 2028 with nine satellites to study solar wind turbulence. HelioSwarm will communicate with the Hub satellite built by mission manager Northrop Grumman, which will coordinate the operations of eight small spacecraft built by Blue Canyon Technologies.

Despite the promise, Swarm and Starling missions in general present challenges in particular. It remains to be seen whether communications, navigation and autonomy technologies are advanced enough for swarm operations. NASA intends to find out with a series of experiments during the six-month Starling mission.

“The nine spacecraft of HelioSwarm form an observatory to provide the first simultaneous, multistage observations in the solar wind needed to understand space plasma turbulence,” said HelioSwarm principal investigator and New Hampshire Institute for the Study of Earth, Oceans. Director Harlan Spence and Space, said by email. “Turbulence is inherently a multi-scale process and those multiple scale sizes must be sampled together in order to understand how energy is expressed.”

“If one of the satellites goes out of range or fails, how do you make sure the network still meets a certain level of reliability and throughput,” asked Shay Sabripore, founder and CEO of CesiumAstro , which is providing Starling’s software-defined radio S-band intersatellite link. “That’s what we’re trying to solve here with NASA.”

Next is the Starlink formation-flying optical experiment, better known as STARFOX. The Starling satellites will rely on star trackers to navigate various structures and prevent collisions. “For the first time, we’ll give a swarm the ability to autonomously navigate space without GPS, using only the cameras in these four CubeSats pointing at each other,” said Simone D’Amico, who is a Stanford scientist. He heads the University’s Space Rendezvous Laboratory. “By exchanging and processing the measurements of these cameras, we are able to determine the orbits of all spacecraft.”

While the Starling satellites operate autonomously in orbit, L3Harris Technologies will run a variation of its flight dynamics planning software on the ground. “Ground planning software is a reference for seeing how well autonomous satellites are performing in a test scenario like this,” said Praveen Kurian, L3Harris general manager for Space Excellence.

The final Starling experiment, Distributed Spacecraft Autonomy, relies on artificial intelligence for planning based on ionospheric observations. With a GPS receiver, the Starling satellites will monitor the ionospheric density and move to specifically detect regions of high or low density. Cannon said, the Starling satellites “will automatically adjust their measurement techniques to take advantage of their relative positions.” firefly launch
The Starling mission is scheduled to launch on a Firefly Aerospace Alpha rocket from Vandenberg Space Force Base in California later this year. The launch, along with seven other CubeSat missions, is a NASA Venture Class Launch Services demonstration.

First, though, Firefly plans to complete the company’s second orbital test launch, Flight 2. Firefly attempted to send its first Alpha into orbit in September, but failed due to the failure of one of Alpha’s four engines. Another orbital test flight is scheduled for no earlier than mid-July, pending receipt of an FAA license. After that, the company will move toward a NASA launch “as soon as possible,” said Kim Janet, Firefly’s director of marketing.

“For Firefly, Starling is “very important in developing a long-term partnership with NASA,” said Tom Marcusic, Firefly co-founder and chief technical advisor. If the satellites are in orbit, Blue Canyon Technologies, a subsidiary of Raytheon Technologies, which also manufactures the Starling satellites, will provide mission operations support.