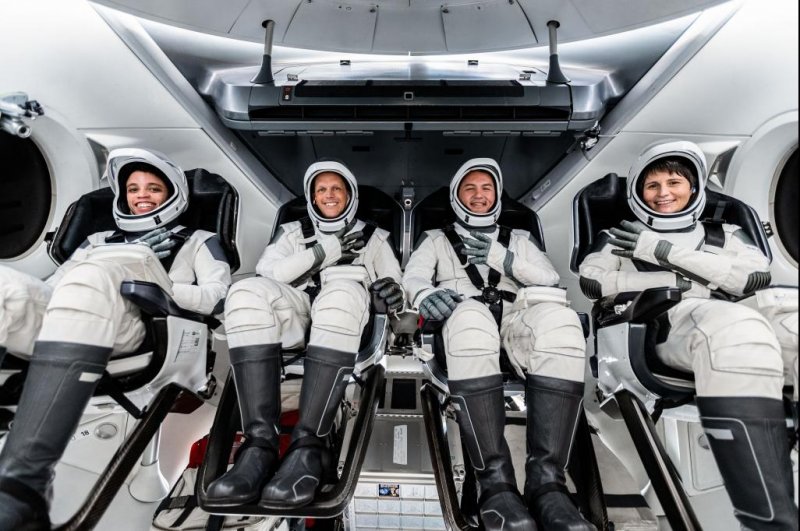 NASA on Friday updated mission progress on SpaceX Crew-4 — NASA astronauts Jessica Watkins, Robert Hines and Kjell Lindgren, as well as Samantha Cristoforetti of the European Space Agency head to the International Space Station on the launch — which is scheduled to launch on April 15. Photo by NASA Commercial Crew/Twitter

ORLANDO Fla. Feb. 4 (UPI) — SpaceX and NASA officials are investigating a lag in parachute openings during the return of the company’s Dragon capsules from the International Space Station with cargo and astronauts, the organizations said during a teleconference Friday.

The return of such capsules was never in jeopardy, and the landing systems performed well during 24 cargo missions and three crewed splashdowns, SpaceX’s Bill Gerstenmaier said.

Two recent Dragon splashdowns, cargo mission CRS-24 on Jan. 24 and Crew-2 in November, included a lag of about one minute for one of four parachutes. But that didn’t cause a problem for the descent, said Gerstenmaier, the company’s vice president of build and flight reliability.

The lagging chute on the CRS-24 return was first reported by SpaceNews.com. But SpaceX and NASA said the lag time is a known issue and has been accounted for in the design of the landing system.

Gerstenmaier said he suspects the fourth chute is sometimes starved for air by the opening of the other three, and only opens when the capsule descends further into thicker atmosphere.

The parachute investigation will be concluded by the time the Crew-3 astronauts on the space station return in late April, NASA’s Steve Stich said.

“Going all the way back to the Apollo program, the parachute systems for human spaceflight were designed to tolerate a single chute out,” said Stich, manager of NASA’s Commercial Crew Program. “I would say this is within what we have seen in testing.”

Dragons have one more chute than Apollo capsules.

SpaceX plans its next astronaut launch to the International Space Station for April 15 aboard a Falcon 9 rocket. The Crew-4 mission is to include NASA astronauts Jessica Watkins, Kjell Lindgren and Robert Hines, as well as Samantha Cristoforetti of the European Space Agency.

Watkins is a rookie space flyer and would become the first Black woman to make an extended stay aboard the space station.

Lindgren and Hines will be spacecraft commander and pilot, respectively, while Watkins and Cristoforetti will be mission specialists.

Like most space station crews, they are slated for a six-month stay aboard the orbiting laboratory, where they will spend most of their time conducting science in microgravity.

The space station is now in its 21st year of operations, and is slated for retirement in 2030 while NASA plans to hand off such work in orbit to private companies while the agency pursues deep space exploration of the moon and Mars.

The International Space Station is pictured from the SpaceX Crew Dragon Endeavor during a flyaround of the orbiting lab that took place following its undocking from the Harmony module’s space-facing port on November 8. Photo courtesy of NASA

Sandra Oh, Donovan Bailey Appointed to the Order of Canada in Dozens

Live: All the coronavirus news you need in one place

Biden says pardoned turkeys will be “ lumped ”, not “ watered ”

This time Hyundai will launch this new car, competing with Tata Nexon