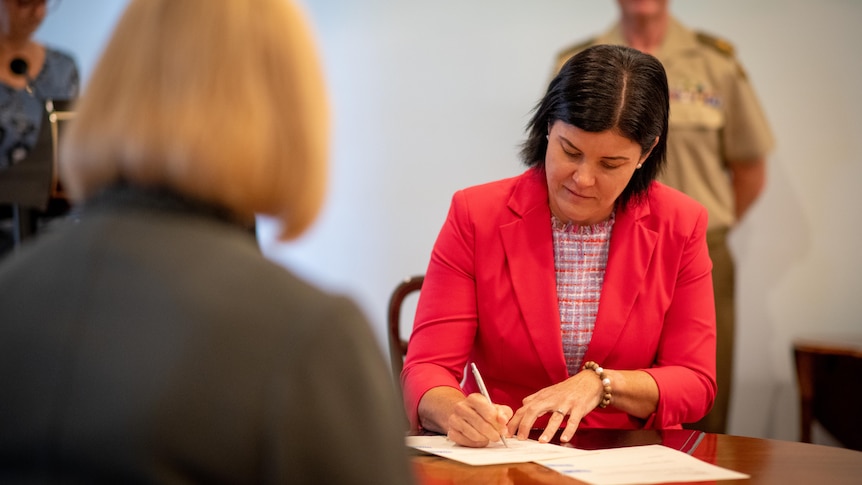 Natasha Fyles has become the Northern Territory’s 12th Chief Minister after the shock resignation of Michael Gunner earlier this week.

Ms Fyles, 43, was sworn in as Chief Minister at Government House this afternoon following a Labor caucus meeting this morning where she was selected as the party’s new leader.

Ms Fyles said she had been selected “as the unanimous choice” by the Labor caucus.

“This morning I asked my caucus colleagues to support me as the new leader for Territory Labor, and they have given me their support,” she said.

“I have been selected as the unanimous choice as leader for Territory Labor.

“I want to thank my colleagues for their support today, for the way we have conducted ourselves as a team this week. We’ve had passionate but respectful discussions.

“We have each put our views forward, but we have stuck together, and we will continue to do so.

“We’ve sorted this out quickly. We are going to keep our focus on the real job, the job of delivering for Territorians.”

Focus to remain on jobs, economy

Ms Fyles said she first joined the Labor party in 1993 and was proud to be elected Territory Labor leader.

“I’ve put my hand up to serve because I love this place. I want to work every day to make it better,” she said.

“I’ve been in parliament for nearly a decade. I’ve served on the opposition frontbench, as a cabinet minister and as Leader of Government Business. I’m ready for this job and I will hit the ground running.”

She said “it was a bit of a shock” to be selected as Northern Territory’s Chief Minister, after Mr Gunner resigned suddenly on Tuesday.

“It’s been a big week. When I was standing on the sidelines at soccer last week, out at Bagot Oval, I certainly didn’t expect the week to end this way,” she said.

“It’s a bit of a shock, but it’s an absolute privilege. I do not take this responsibility lightly.”

Ms Fyles also thanked Mr Gunner for his work in the position, which he has held for nearly six years.

,[Mr Gunner] served the Territory well. He put his heart and soul into the job, and we are grateful that our government can continue to count on his experience and advice,” she said.

The selection of Ms Fyles means the party does not have to take the vote of its rank-and-file membership — a process that could have taken the party up to four weeks.

Labor ministers had expressed optimism the party would come out of the caucus meeting with a new leader during the week.

But in the lead up, speculation had mounted Ms Fyles, Police Minister Nicole Manison and Member for Johnston Joel Bowden could all contest the leadership, forcing weeks of political uncertainty.

Ms Fyles is the Leader of Government Business and has been the NT Health Minister since 2016, and was the Attorney-General between 2016 and 2020.

She was the first elected to parliament in 2012 and was promoted to the frontbench after Labor’s landslide win in 2016.

As Health Minister, she has been a highly visible presence throughout the pandemic along with Mr Gunner and NT Chief Health Officer Hugh Heggie.

“Tash, Australia’s best Health Minister. I don’t know what’s better – seeing how much fun she has on the floor of parliament, or seeing how much the other side hates it,” he said.

Part of Labor’s left faction, Ms Fyles was viewed alongside Ms Manison, of the right faction, to be the frontrunners for the job.

Ms Fyles represents the electorate of Nightcliff in Darwin’s northern suburbs, which is considered the safest Labor seat in the territory, with a large margin of 26.7 per cent.

Since the election of Mr Gunner in 2016, Ms Manison has been the Northern Territory’s Deputy Chief Minister, and had been acting in the role following his sudden resignation.

During the week she had been described by some as a “logical” choice to succeed Mr Gunner.

On Wednesday Ms Manison said it would be important for the caucus to select a new chief minister and avoid the protracted voting process, saying “people want stability”.

Ms Manison, who was by Ms Fyles’s side at a press conference this morning, praised her selection as leader.

“I want to give my full congratulations to Natasha, and I am just so proud of her today,” she said.

“I’ve had the great privilege to serve with her my whole parliamentary career.

“What I can tell you about your new Chief Minister is that you have got somebody who loves this place, who is so committed to the Northern Territory, who is tenacious, hard-working, determined, and she is going to make a huge difference “

Federal Opposition Leader Anthony Albanese, who is expected to fly into Darwin this afternoon, congratulated Ms Fyles on her appointment.

“I know Natasha well,” he said.

“She’s been a very good minister and she’ll make an outstanding Chief Minister.”