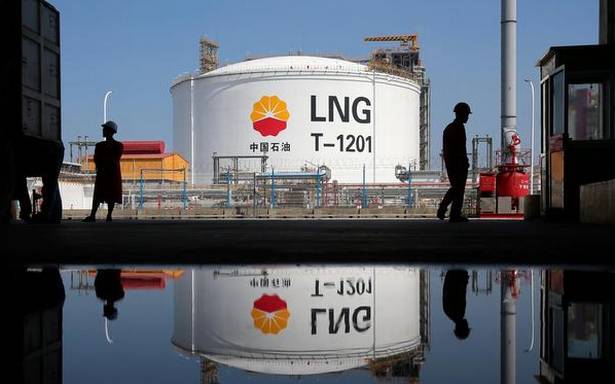 Crude oil futures on the Multi Commodity Exchange (MCX) declined in the early hours of Wednesday morning, while natural gas futures traded higher on forecast of cold weather due to a rise in global prices.

January natural gas futures were trading at ₹311.10 on MCX in the early hours of Wednesday morning, up ₹307.10, up 1.30 per cent from the previous close.

The demand for natural gas is increasing due to the cold weather in many parts of the US. Sub-zero temperatures have forced schools in the northeastern US to cancel classes on Tuesday.

Recent reports said a drop in temperature had forced natural gas wells in many parts of the US to freeze, affecting production from those wells. The US is one of the major exporters of natural gas.

January crude oil futures were trading at Rs 5994 in the early hours of Wednesday morning at ₹6004, down 0.17 per cent from the previous close.

Market participants, however, feel that the statement by US Federal Reserve Jerome Powell is likely to boost short-term fuel demand. He said on Tuesday that a hike in rates and a strict policy would be required to control inflation. Market participants felt that a tight market would help support oil prices.

On the National Commodities and Derivatives Exchange (NCDEX), January guar gum contracts were trading at ₹11719 in the early hours of Wednesday morning, as against ₹11504 against the previous close, a rise of 1.87 per cent.

January castorseed futures were trading at ₹6030 on Wednesday morning, up ₹5978, up 0.87 per cent from the previous close.

CBRE brokers in standoff over what Newmark can do for work

Why buy a new Tata Safari! Learn about the features and variants of this SUV