Navalny Jailed for 9 Years on Charges He Denies 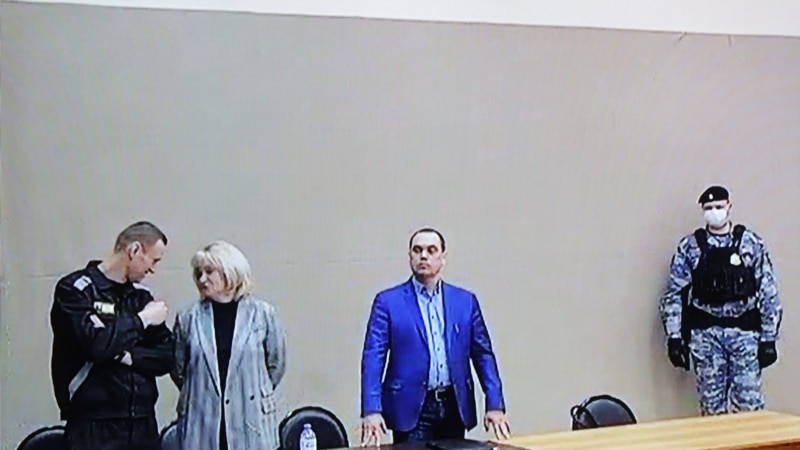 A court in Russia has found opposition politician Alexey Navalny guilty of embezzlement and contempt charges and sentenced him to nine years in prison.
Judge Margarita Kotova announced the verdict on Tuesday at the penal colony outside Moscow where Navalny is being held. Prosecutors had asked for a prison sentence of 13 years.

It was not immediately clear whether the sentence would run concurrently with Navalny’s current 2 1/2-year sentence on a separate charge, or if the new sentence would commence only after his previous punishment ends.

Looking gaunt and dressed in his all-black prison outfit, Navalny stood with his lawyers in the makeshift courtroom filled with security officers as Kotova read out the allegations against Russian President Vladimir Putin’s most vocal critic.
The 45-year-old, who is a lawyer himself, seemed unfazed during the proceedings, often looking down while Kotova spoke as he perused court documents.

Navalny has spent the last year in the penal colony on a different charge after returning from abroad, where he was recovering from a near-fatal poison attack that he blames on the Kremlin.

The corruption crusader repeated his innocence during his final statement at the trial, noting the prosecution’s demands highlighted the corrupt nature of the trial.

Russian authorities have tried to cast Navalny and his supporters as Western-backed operatives trying to destabilize Russia. Many of Navalny’s allies have fled Russia rather than face restrictions on their freedom or even prison time at home.
His Anti-Corruption Foundation (FBK) has been labeled an “extremist” organization and banned.

The new case against Navalny was launched in December 2020 on that the 45-year-old anti-corruption campaigner embezzled money from his now defunct and banned Anti-Corruption Foundation (FBK) and for contempt of a Moscow court.

Investigators accused Navalny of taking around $33,770 in donations for his own personal use. Navalny and his supporters reject all the charges, calling them politically motivated.

The contempt charge stems from a separate case he was involved in last year.
Within weeks of returning from his convalescence in Germany in January 2021, Navalny was jailed for violating the terms of an earlier parole. His conviction is widely regarded as the result of a trumped-up, politically motivated case.

The Kremlin has denied any role in the poisoning, which along with his arrest sparked widespread condemnation and sanctions from the West.