Nets silence Philly fans in blowout victory over the Sixers 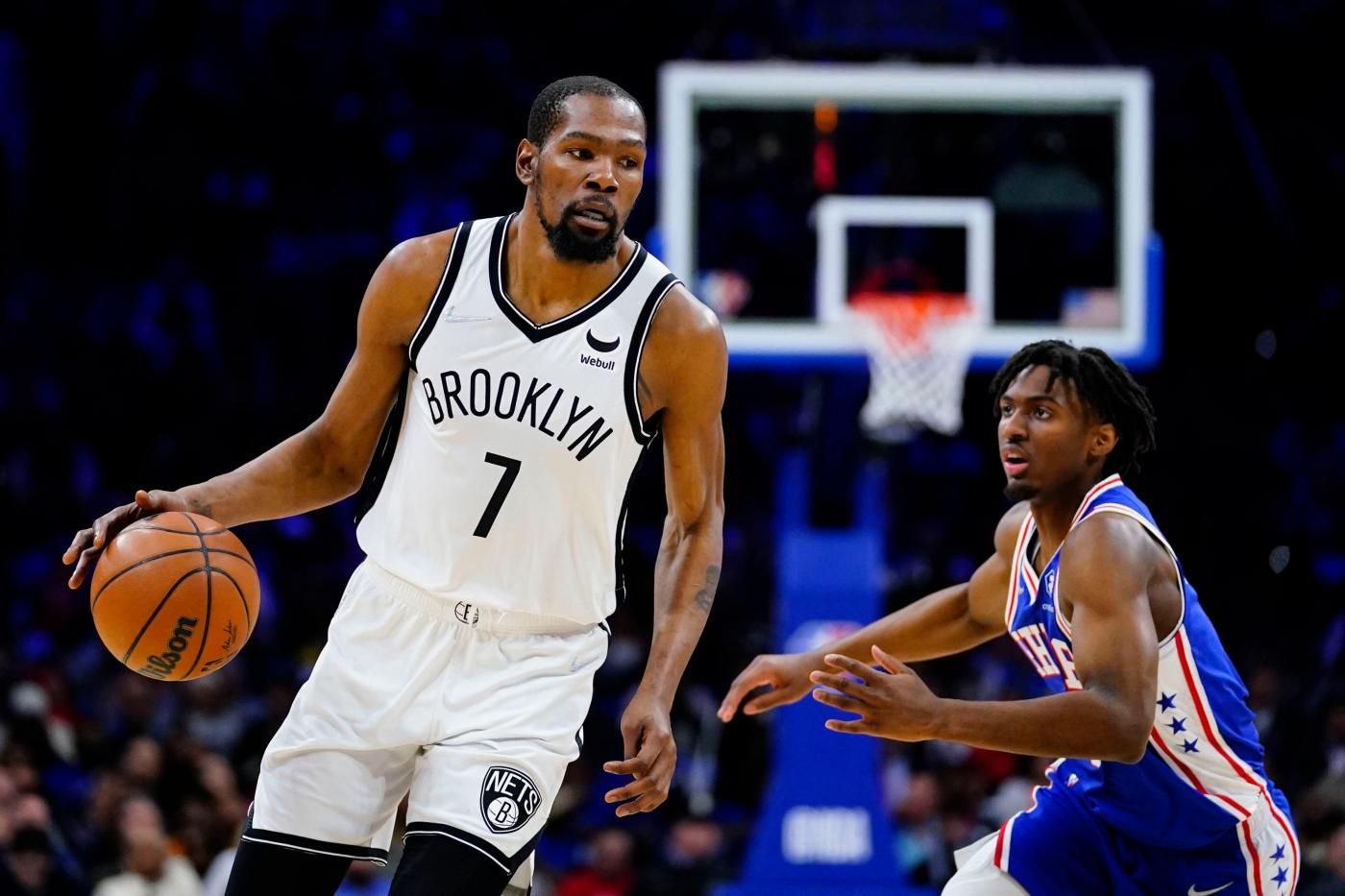 PHILADELPHIA — The night began with boos for Ben Simmons.

The night ended with boos for the 76ers, and cheers from the traveling Nets faithful after the arena cleared.

Philly fans booed Simmons, the ex-Sixers star who joined the Nets in the James Harden trade, every time he was visible: When he entered the team hotel after the bus arrived in Philadelphia; when he assisted Patty Mills during pregame warmups, and when he emerged from the locker room wearing a black-and-yellow hockey jersey to join his team on the bench as a spectator for Thursday night’s rivalry game.

Those boos may have impacted Simmons, who smiled at times when the fans poured on. But they had no effect whatsoever on a Nets team that strung together its most dominant win of a tattered yet fully salvageable regular season.

The Nets made quick work of the new-look Sixers, leading by more than 30 en route to a 129-100 victory in Philadelphia. It was the most focused performance the Nets have put forth in the aftermath of the blockbuster deal that uprooted their roster mid-season, and they have won two straight since their get-right victory over the Charlotte Hornets on Tuesday.

Kevin Durant, Kyrie Irving and Seth Curry scored 25 of the Nets’ first 26 points and combined for 71 on the night. At one point, the trio had scored 44 points to Philly’s 42.

Meanwhile it was a night to forget for Harden, who couldn’t muster any offense. The Beard scored 25 or more points in each of his first four games as a 76er but shot just 3-of-17 from the field for 11 points against the Nets. It was a vintage Harden performance: He shot 2-of-11 against the Sacramento Kings, 6-of-19 against the Phoenix Suns and 4-of-13 against the Minnesota Timberwolves in three of his last games against the Nets before the trade to Philly.

And to think: At some point, Simmons will be off the bench and on the floor joining the players who just reduced his former teammates to ash on Thursday.

Here’s some more food for thought: This might not be the last time these two teams play this season.

Thursday night’s victory moves the Nets just two games behind the Toronto Raptors for the No. 7 seed in the Eastern Conference. They also have the NBA’s fourth-easiest remaining schedule, and with the Philly game now behind him, Simmons is expected to overcome his back soreness, get in shape and join the rotation in the coming weeks.

Yet even without Simmons, even without Joe Harris (out for the season with ankle soreness), and even without LaMarcus Aldridge (hip), the Nets proved the better team by a mile. Joel Embiid scored 27 points but did all of his damage from the foul line, where he shot 15-of-19 from the charity stripe in the first half alone. The Nets sent doubles at Embiid and hastened him every time he touched the ball, forcing him into a 5-of-17 shooting night from the field.

Meanwhile, the Nets shot 56% as a team and 45% from deep, featuring 25 points from Durant, 24 from Curry and another 22 from Irving. They also held the Sixers to less than 120 points for their first time in any games Harden and Embiid have played together.

As dominant of a victory as Thursday night was for the Nets, it’s only one mark in the win column. Brooklyn is still fighting an uphill battle: They remain at the bottom of the Eastern Conference playoff picture, in need of a Hail Mary to evade the end-of-the-season play-in tournament.

Yet with Irving, Durant and Curry, the Nets proved more than capable of handling a top-four Eastern Conference foe. And as for Simmons, so what if Philly fans booed him?

Those boos will be a distant memory when he makes his Nets debut, though it remains unclear when that date will come.