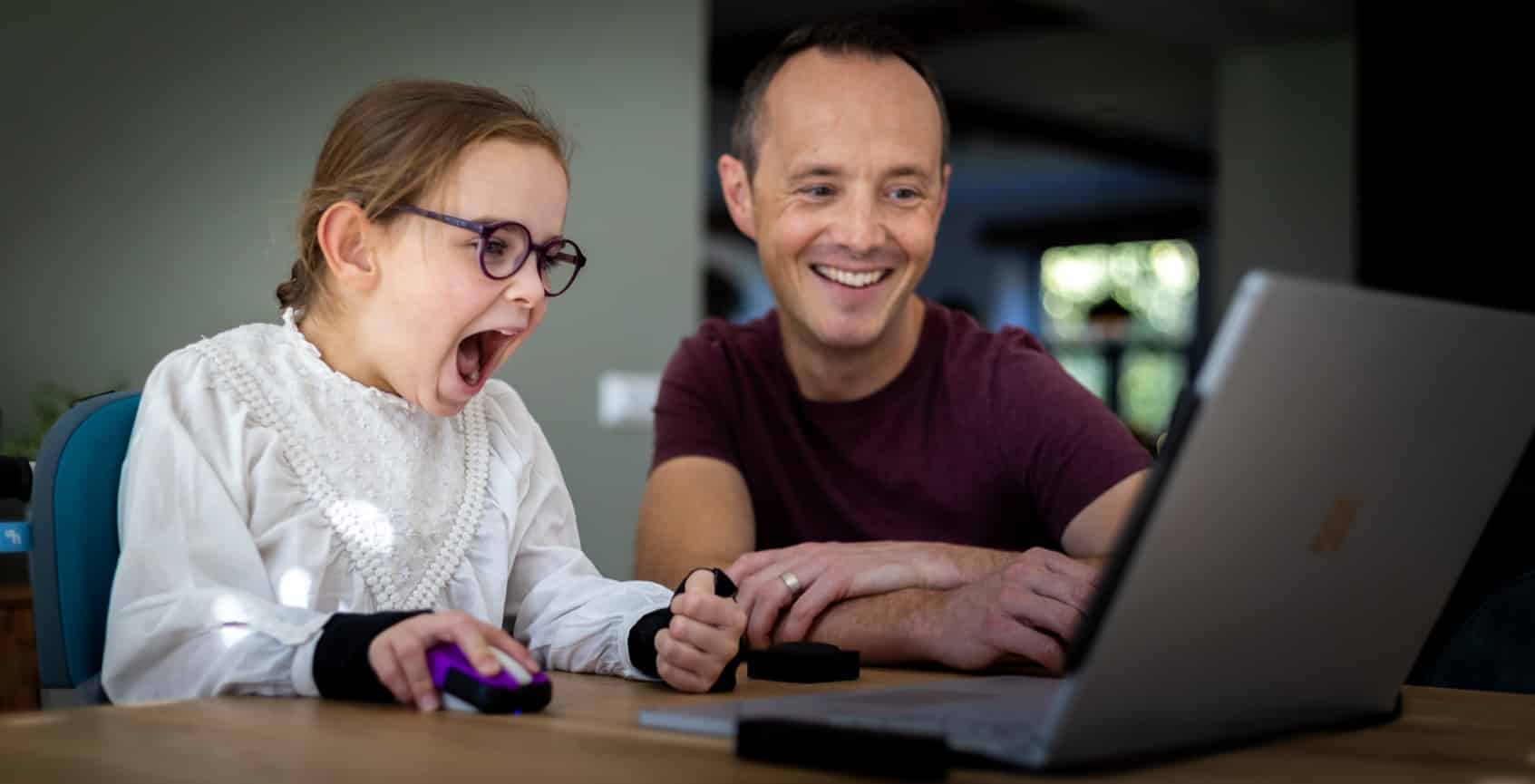 When Zara Helms was a child walking around in heavy, rigid leg braces, her father made her a light, soft pair 3D-printed in her favorite color, pink. When Zara started using the computer at school and could no longer control the mouse, her father envisioned building another custom device for his daughter, who has cerebral palsy.

But this time Microsoft industrial designer John Helms had a bigger project. He brought his idea, an adaptable mouse for people who cannot use a traditional mouse, to the company’s hackathon, an annual innovation event for company employees. He assembled a great team to build a prototype from the Microsoft Arc mouse, which he cut out and attached to a 3D printed part designed for finger support and control. The device reduced unwanted clicks and helped Zara, at age 5, control her computer’s cursor for the first time.

After two years and several iterations, the initial prototype evolved into the new Microsoft Adaptive Assistant, a highly customizable ecosystem that allows users to customize their mouse, keyboard input, and shortcuts. Accessories include the adaptive mouse, adaptive hub, and adaptive buttons and are generally available now.

“At first, it was, ‘Zara can’t use a PC. I’m your dad. You have to hack a way for her to use a PC,'” says Helms, who lives in the Netherlands. “But pretty quickly, I thought, ‘Wait. If it works for him, it could have a similar effect for many others.”

Wireless accessories can replace or enhance a traditional mouse and keyboard for users with limited mobility or anyone who wants to use a PC more easily and efficiently. Users can customize the Adaptive Mouse with a variety of accessories, including mouse tail extensions and configurable left- or right-handed thumb rests. They can create custom inputs without a keyboard through the Adaptive Hub and Adaptive Button, which is available as a D-pad, joystick and dual buttons. The mouse and buttons can be further customized with attached 3D printed accessories from the Shapeways company.

“Microsoft Adaptive Accessories aims to remove the barriers that traditional mice and keyboards can present for people with limited mobility,” says Gabby Mitchell, director of accessible accessories at Microsoft. “No two people are the same, and empowering people to set up their own system that works for them was definitely the goal.”

Buttons and Hubs have helped North Carolina graphic designer and broadcaster Mandy Pursley get to work faster and with less shoulder pain. Born without a right hand or forearm, Persley typed and moved the mouse with her left hand. With adaptive products, you were able to program buttons with task-replacement macros and repetitive mouse and keyboard actions that required you to press multiple keys at once.

“Buttons have been most incredible. It’s like they did it just for me,” says Pursley, who recently timed himself while working on a 500-page project with easy-press buttons. He found that He can work 30% faster, which saves him hours of time.

“It’s going to make a huge difference to so many people,” she says. “People with disabilities already have a lot of creativity and ingenuity as we have to learn to function in the world and adapt to technology. It is only having technology that really adapts to us will take our productivity to the next level.”