Community transmission of COVID-19 may be peaking but new modeling from Ontario’s Science Table is warning that hospital stays are “likely to continue for some time” and this past the height of a fifth wave of pandemics levels experienced during winter.

The group of scientists and epidemiologists advising the Ford government on its pandemic response has released new projections that suggest the number of Ontario hospitalized with COVID-19 could pass 3,000 by May in the most likely scenario .

The table is also predicting that the number of COVID patients taking ICU beds will increase, but says the final peak will be less than that of the fifth wave of the Omicron-fueled pandemic.

According to the table, the most likely scenario would see around 500 patients with COVID in intensive care by May. The worst-case scenario, meanwhile, will see over 600 people with COVID-19 in the ICU by May. In January, the number of people in the ICU had reached 626.

“We really have a lot of uncertainty here and we’re not quite sure how it’s going to play out,” Dr. Peter Juni, the table’s scientific director, told CP24 on Thursday afternoon. “We are relatively confident that the chances of hospital and ICU stays should be less this time than last time and that helps. But there is a caveat. The caveat is that you have again (because of the infection) excluded a lot of healthcare workers who were at the same level last time as during the Omicron wave and that will add stress to the healthcare system. 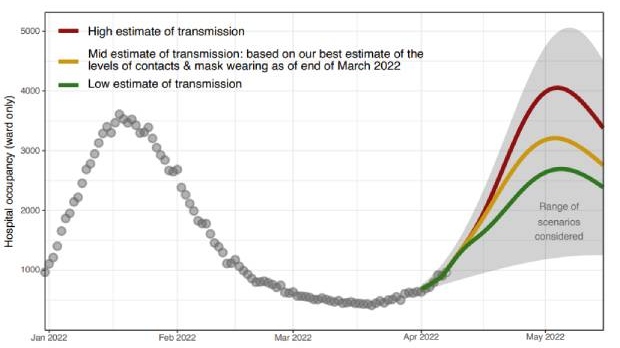 The latest estimates paint a much more alarming picture than the modeling released by the table last month, which estimated that by May there would be around 800 COVID patients in the hospital as well as another 300 in the ICU.

However, that was before Ontario lifted the mask mandate in most settings, along with many other public health restrictions.

It also pre-dates the predominance of the more infective BA.2 subvariant in Ontario, now estimated around March 10, Science Table.

In a presentation accompanying the latest data, the science table said that masking in indoor areas will “substantially reduce the risk of getting and spreading COVID-19” and noted that “masking if widely adopted in public places will prevent the spread of COVID-19″. Community benefits are most pronounced in schools and the workplace.”

While the table did not explicitly call for the return of the outright mask mandate, Juni told CP24 that he would like to see masks required in schools, which have been shown to increase transmission.

“I personally would think that most of my colleagues or all my colleagues at the science table would probably welcome a masked mandate at school,” Juni said. “Why? We’re still in a really challenging situation. We probably have about five percent of the population infected with COVID right now and that’s certainly reflected in the schools as well. Maybe it won’t hurt to go beyond strong recommendations there.” But I know there are political views too and that is beyond my role.

The number of people diagnosed with COVID-19 in Ontario hospitals has increased by 23.6 percent over the past week to 1,392, the highest number since mid-February.

The good news is that the pace of increase, at least so far, is not as clear as it was in January when hospitals were forced to cancel elective surgeries and procedures for nearly three weeks.

“I am cautiously optimistic that the impact on our health system will be much smaller than in the first (Omicron) wave, our numbers well below the current model,” Dr Kieran Moore, chief medical officer for health, told CP24 on Thursday afternoon. , calling the latest estimates “good news”.

Moore said the slow rate of hospitalizations, compared to the height of the Omicron wave last winter, tells him that Ontario is “building a wall of immunity” through vaccinations and recent infections.

He said the next few weeks could be tough for hospitals from a “staffing vantage point”, believing they would have the resources to manage the surge in patients presenting with COVID-19.

“We are seeing some degree of disconnect. We are not seeing a rapid increase in access to intensive care. I think it is because the people of Ontario have been very good at coming forward and getting vaccinated,” he said.

The science table estimated that 4.5 to 60 million Ontarians have contracted COVID-19 since December 1, accounting for at least one-third of the province’s population.

It said the sheer number of infections is likely to have some long-term impact on the health system, with conservative estimates showing that 10 percent of unvaccinated individuals who contract the virus eventually develop long-term COVID.

“This is likely to have a significant impact on the economy, health care system and society in the coming years,” warns Table.